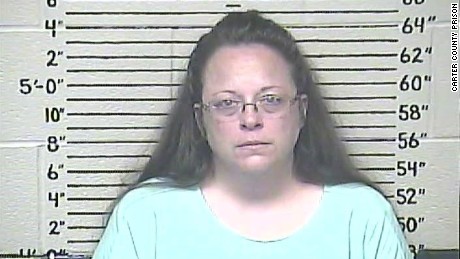 The rhetoric in the Kim Davis matter has exploded. In case you missed it, Kim Davis is the Kentucky county clerk who was jailed for contempt of court for defying a federal court order to issue licenses to same-sex couples.

She compounded this problem by rejecting a proposal that would allow her deputies to process same-sex marriage licenses that could have prompted her release, the New York Times reported on Thursday.

The reaction has been fantastical, to perhaps understate it slightly. The National Review called her a “rightful prisoner of conscience.” Her attorney, Mat Staver of the Liberty Counsel, compared Ms. Davis to Jews under the Nazis.

“Does that mean that if you’re Christian, don’t apply here; if you’re a Jew, you gotta get — what happened in Nazi Germany, what happened there first, they removed the Jews from government public employment, then they stopped patronizing them in their private businesses, then they continued to stigmatize them, then they were the ‘problems,’ then they killed them,” Staver said. “The fact of the matter is, she has a right to this employment and you don’t lose your constitutional liberties just because you are employed by the government.”

That is exactly true – as a government employee and an elected official, she is sworn to carry out her duties under the Constitution.

On the one hand, the optics here are bad. Throwing an elected official in jail for refusing to issue marriage licenses seems over the top and heavy-handed. It plays into the rhetoric of a Nazi state that the right has been employing.

On the other hand, she didn’t exactly leave them a lot of choice.

Yesterday I engaged in a brief exchange with a more conservative friend of mine. I asked whether he believed a warden should be able to refuse to execute a person they believe is innocent.

My friend suggested that a warden should be accommodated and the state carry out the execution with someone willing to do so. Makes sense. The problem is that appears to be exactly the deal that Ms. Davis refused, that would have kept her out of jail – allowing one of her deputies in her office to carry out the issuing of the marriage licenses to same-sex couples.

On August 12, U.S. District Judge David Bunning ruled that plaintiffs in this case must be able to obtain marriage licenses in Rowan County. Ms. Davis appealed that decision. The US Supreme Court, on August 31, denied without dissent her request for a stay on an order from the 6th U.S. Circuit Court of Appeals that required her to issue marriage licenses immediately to couples in the case of Miller v. Davis.

That means that Ms. Davis no longer has legal grounds to continue to deny the district court’s order.

She has cited religious beliefs as her rationale, but, as the ACLU points out, “But Davis’s duty as a public official is to enforce civil law, not her own personal religious views…. Davis is entitled to her religious beliefs on same-sex marriage, but she can’t shirk her official duties because of them.”

The best legal analysis I have seen here is Cornell Law Professor Michael Dorf’s commentary in Verdict. He notes that Kentucky Governor Steve Beshear, following the Obergefell v. Hodges decision, “informed county clerks throughout the state that they have a duty to grant marriage licenses to same-sex couples, and that if they felt that they could not do so, they ought to resign.”

However, Ms. Davis did not choose to resign and instead, “she adopted her own personal policy for the county. She would not grant any marriage licenses, and she would not allow any of her deputy clerks to do so either, even though at least one of them was willing to.”

Ms. Davis, Mr. Dorf writes, attempted many legal maneuverings including requiring couples to get marriage licenses from neighboring counties and invoking her federal constitutional right to free exercise of religion.

Mr. Dorf writes that “that argument failed because the obligation to provide marriage licenses to same-sex (and opposite-sex) couples applies to anyone occupying the office of county clerk. Davis was not being singled out because of her religion, and the federal free exercise case law makes clear that it has no application where the burden on religion arises out of a general obligation not targeting religion.”

Ms. Davis, he wrote, relied on the Kentucky Religious Freedom Restoration Act (RFRA), “arguing that state law—insofar as it prevented the state from allowing the judge/executive to provide marriage licenses or to permit a deputy to issue a license that does not bear her name on it—burdened her freedom of religion in violation of the state RFRA.”

However, “The district judge rejected the state RFRA defense on the ground that state law imposes only a ‘slight’ burden on her religious freedom because issuing marriage licenses does not ‘condone same-sex unions on moral or religious grounds, nor’ does it prevent ‘her from engaging in a variety of religious activities’ such as church attendance, Bible study, and the maintenance of her belief in the immorality of same-sex marriage.”

In the end, while I am uncomfortable with using the jailing of an elected official for contempt, she didn’t exactly leave the court much option. She rejected a compromise to allow her deputy to issue the licenses – the very remedy my conservative friend suggested.

My friend referred me to Rod Dreher of The American Conservative, who seems to have a pretty reasonable belief which, while they’re “making a martyr,” acknowledges that she doesn’t have a single legal argument to stand on, and that “she’s just defying the law, including the highest court in the land. Again and again, I think Obergefell was wrongly decided, and was little more than a majority of the US Supreme Court putting flimsy dressing on its policy preferences. But there is nothing in our public order that gives people the right to defy the law without consequence.”

And I agree with him – making her a martyr, at least in conservatives circles with a heavy-handed response, is probably less than productive, but at the end of the day, they gave her an out and she refused to take it.

Years ago I admired the courage of Yolo County Clerk Freddie Oakley who would, on a yearly basis, protest prohibitions against same-sex marriage by issuing Certificates of Inequality.  But that is a little different because she wasn’t refusing to carry out her duties, she was simply protesting – granted, during official hours – her inability to carry out the will of her conscience. Kim Davis should figure out a way to protest her convictions while carrying out the duties of her office.  And if she cannot, she ought to resign.

42 thoughts on “My View: Kim Davis’ Duty to Carry Out the Law”