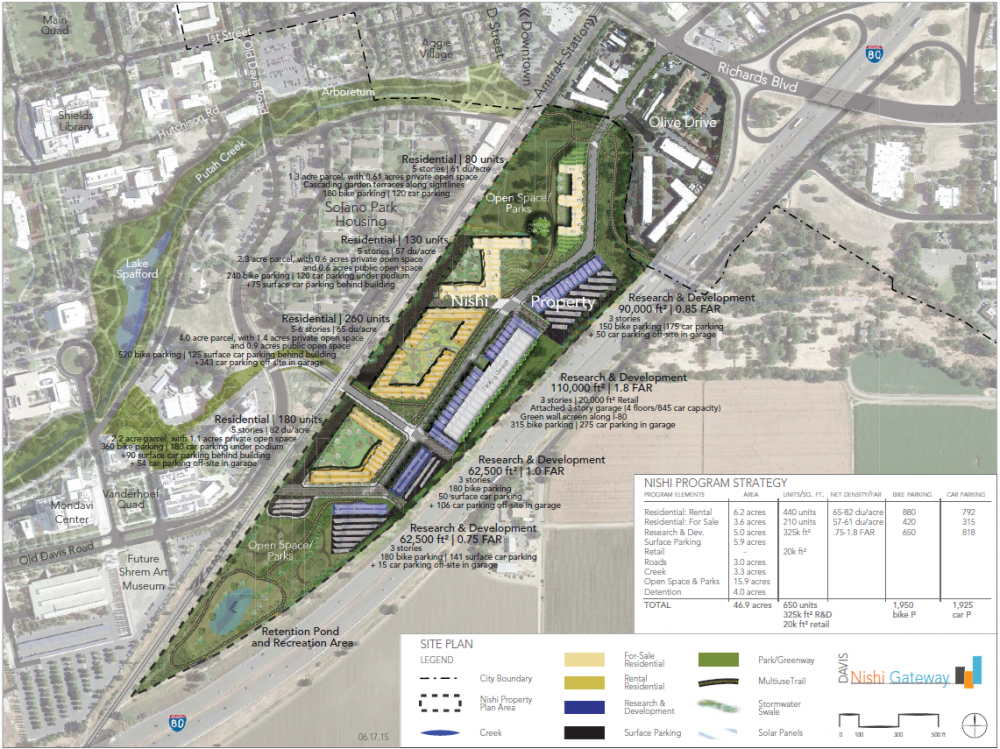 In a press release from the Nishi developers, ahead of Thursday’s release of the Nishi Draft EIR, the developers are touting their “Sustainability Implementation Plan,” that they say was developed in partnership with UC Davis and the City of Davis. As discussed last week, the Nishi Gateway project requires a Measure R vote and could be on the ballot as soon as June 2016.

The Nishi Gateway project has been in the works for a number of years. As far back as November 2012, the city council approved a cost funding and negotiation agreement for the Nishi Property. The goal was planning the site as a mix of university-related research park development complemented by high-density urban housing.

Since then the city and the developers have worked toward a plan that would create a mixed-use innovation district, with space for Davis businesses and high-tech startups, along with high-density urban residential development near downtown and employment centers.

The 46-­acre Nishi Gateway Project is designed to “provide space adjacent to campus and Downtown Davis for tech transfer from university research to local startups, helping to stimulate small business growth.” According to the developers, “The project will strengthen the downtown and the City’s economy while addressing the student housing crisis.”

The Draft EIR will include a “Sustainability Implementation Plan” that was developed in partnership with UC Davis and the City of Davis. This plan “would be incorporated into the project and strive to provide a more sustainable development and model for future development within the City and the region.”

In 2014, the Nishi Gateway was awarded a grant by the Strategic Growth Council’s Sustainable Communities Planning Grant Program “with a focus on sustainability and green development.” According to the release, they ranked Nishi the #1 project in the state in their sustainability grant award.

“With the Nishi Gateway, we’re doing everything we can to present Davis voters with a project that meets the values of our community. Nishi was conceived by campus and community leaders with sustainability and green living in mind, and every step of the way, we’ve incorporated these goals into the project,” said Tim Ruff, a partner and co-­owner of the Nishi Gateway.

He added, “I hope every Davis resident has an opportunity to review the Sustainability Implementation Plan in the Draft EIR. We’re proud of what we’ve accomplished, and as this conversation moves forward, I think our community will recognize the Nishi Gateway as an important and welcomed addition to our Downtown.”

Under the Sustainability Implementation Plan, the developers believe that the Nishi Gateway will:

When the Draft EIR is revealed this week, “each of these goals will be well-represented throughout the document.”

The Nishi Gateway “also advances the City’s top priorities for Downtown Davis as outlined in a report to the City Council in 2014 based on district-­wide input.”

Consistent with these priorities, developers believe that Nishi will help:

The developers add, “The Nishi Gateway will likely appear on the Davis ballot sometime in 2016.”