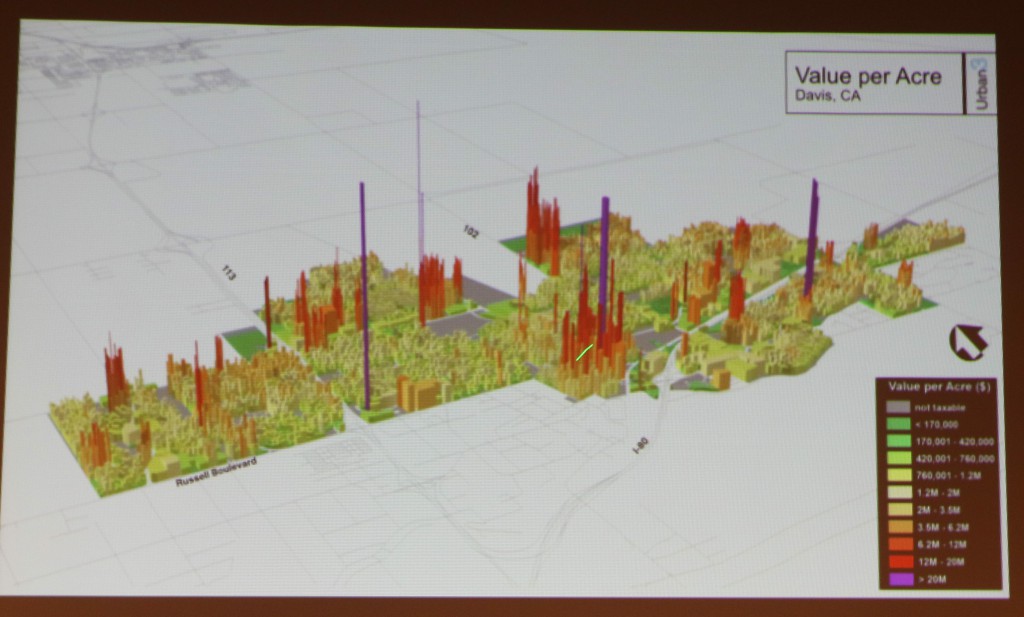 Joe Minicozzi brought a very slick presentation to Davis on Tuesday night, along with some interesting ideas for measuring the impact of development and planning decisions. The question is how practical is his model.

From discussions I have had with a variety of people, there are some good ideas in there, but there are some practicalities that would make implementation very difficult.

First, I do not think we take into account enough the efficiency of a revenue model. Looking at net revenue (which takes into account the cost of service for a given site) per acre is a different way of thinking about revenue for our community. I don’t think we’ve paid sufficient attention to that.

Second, I’m an admitted opponent of big box development, so I absolutely loved his Walmart riff and he’s correct. The business model of Walmart is horrendous for the community. They build cheap buildings – as cheap as they can get them. They are large, spread-out units with huge parking lots. And so they are naturally going to produce less net revenue per acre than other types of development. Of course, Mr. Minicozzi isn’t even looking at the transaction costs and the loss of other business predicated in the model

Along those lines, those who looked at where Target was on the map, saw it barely registered on the map. A lot of people have pointed out over the years that the city allowed Target to get away with the lowest level LEED (Leadership in Energy and Environmental Design) design possible, but it also has a wasted space parking lot. Imagine having a parking structure on top – we could have the same revenue with less than half the footprint, which could have allowed more of an open space buffer zone between Target and the nearby residents, or more retail space.

Some will want to argue that this model shows that we should not attempt to do innovation parks. I disagree. The first thing that we have to acknowledge here is that Mr. Minicozzi is only showing us one piece of the puzzle. It is an important piece, but it’s not the only one.

With respect to an innovation park, Schilling Robotics, to cite a rather obvious example, is not going to move into a dense five-story building in downtown. So, while the efficient use of space and better utilization of the downtown core are models we should continue to push, that doesn’t mean we don’t have a need for more space for a research park.

What it might mean, however, is that a development with a .5 FAR (floor area ratio) is not a good utilization of space. I have been arguing this for some time. Mace Ranch Innovation Center is looking at perhaps 2.4 million square feet of space which is conservatively estimated to generate $2.1 million in revenue, but what happens if we push that density and bring it up to 4 million square feet of space?

That would be a more efficient project. One of the good things about the presentation that we didn’t get a chance to discuss enough is that he demonstrated why expanding borders adds costs, because you need to bring the services out to the new areas. That means water lines, gas lines, electricity and roads. All of those things are expensive. By densifying even the peripheral projects, you reduce that expense through economy of scale.

The other critical point that Mr. Minicozzi raises by implication is the large number of single-story units in the core area. There are very inefficient land use practices right in the heart of our most productive zone.

At the same time, there are shortcomings here. First, his example in Asheville is not an example of redevelopment but rather of repurposing of existing buildings. In Davis, we would have to knock down single-story buildings and build more densely.

One of the problems with that approach is cost. Trackside has been roundly criticized for proposing a six-story building. However, going over the numbers with a few people, it might take something that high to enable the costs of the new construction to pencil out.

Developers are going have trouble financing that kind of redevelopment. That is why for years we had the RDAs (redevelopment agencies), which, despite a lot of flaws, at least gave the cities the ability to publicly finance redevelopment and new density.

But with RDAs gone and the legislature struggling to find a replacement, we are left with the possibility of public financing – which would greatly cut into any revenue stream advantage the city would have.

Joe Krovoza rightly cited another problem we had in Davis, where we actually had the RDA funds in place for a redevelopment of the huge city block between E and F Streets and Third and Fourth Streets. The landowner would not go for it, the community had strong opposition, and the money ended up disappearing.

Finally, while stacking retail and creating a more efficient big box or shopping center is something that has a great appeal to a lot of people, there are flaws with that as well. But, as one person pointed out, Davis probably does not have the retail base to support such development. We have about 75,000 people, maybe a little more when you account for students and people who work in Davis during the day, but is that going to support an expensive building model?

The bottom line is that, when we analyze fiscal models, we should take into account the efficiency of design, but realistically Davis is not going to be able to solve its fiscal problem through densification of the downtown in a post-RDA world. We still need to look toward peripheral innovation parks to generate more revenue. However, we should look at doing so efficiently and preserving as much land as possible.

86 thoughts on “Analysis: What Do Minicozzi’s Ideas Bring to Davis?”