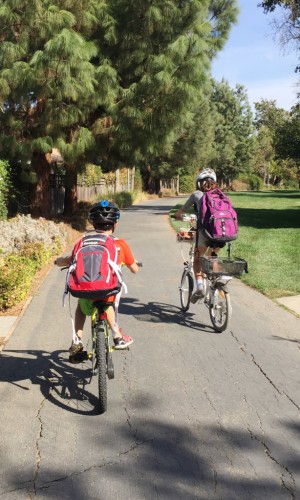 In August, with my daughter entering sixth grade and my son entering third, I decided this would be the year my kids started to make the bike ride from our house in South Davis to Birch Lane Elementary School, all on their own.

A neighbor, learning about my plan, asked if his daughter, a fourth-grader, could ride with them. Great, I said, and we made plans for the kids to meet on the bike path at 8 a.m. every day.

Not being a “morning person,” and I don’t use make this claim lightly, I consider having to wake up anytime before 10 a.m. early, I was excited about the idea of not having to ride with my kids at this outrageously early hour.

I was also happy with the prospect of avoiding the before-school traffic congestion I faced on the days when I was unable to get them out the door in time to ride bikes, which, to be completely honest, happened more often than not, despite my regular resolutions that this was going to be the week, the month, the year, that we rode to school more often than we drove.

While I looked forward to waving goodbye to them every morning from the comfort of my house, rather than the front seat of my minivan, I did brace myself for the complaints I assumed would start coming about having to ride their bikes instead of being driven, which generally followed my past attempts to make this our regular mode of transportation to and from school.

Little did I know, when this plan was hatched, how wrong I was about this, and how much better my life, specifically my mornings, were about to get.

It started a few days after my kids began to ride to school without me. (I rode with them the first week, drilling them about the route I wanted them to take and potential hazards they might face along the way.) Before my eyes, which ultimately would get to remain closed, my kids, who use to have to be nagged to do everything in the morning — from putting on their shoes to packing their backpacks — became completely self-reliant.

My daughter took on the responsibility of waking up my son. They started making their own breakfast, they packed their lunches, they found their own shoes and they put them on without having to be asked. And, most amazingly, they did something I was never able to do: They got themselves ready and out the door at 8 a.m. every day, all on their own.

It was a morning in early September when I realized how different my life was going to be from here on out. I woke at 7:45 to the sound of my daughter yelling to her brother, “Drew you need to wake up, we have to be ready in 15 minutes.” I pulled the covers in tight, figuring I’d enjoy the last few minutes in bed before my kids stampeded into my room with frantic requests for help getting ready, while planning the text I soon would be sending to my neighbor, letting him know that we overslept and were going to have to drive today.

As I heard my kids’ voices while they exited out our back gate, I looked at the clock: It was 7:58. They had gotten themselves ready for school in 13 minutes, all on their own.

It is now mid-October, and I’m the most well-rested I’ve been in my entire life. With the exception of picture day (my daughter, not wanting the hairstyle she worked so hard on messed up, asked me to drive her, and I, accepting the fact that I was now the parent of a tween, agreed to do so), my kids have ridden their bikes to school every day, without complaint.

I was aware of the environmental, health and educational benefits that came along with the decision to have my kids ride to school this year instead of driving them. (Kids who exercise before school learn better.)

What I was unaware of was the self-reliance and self-confidence this act of independence would foster in them. And as much I’m enjoying staying up late to watch my favorite shows, I’m sleeping more soundly in the morning with the knowledge that my kids have the confidence and self-assurance to know they can face some of the challenges life will throw at them, all on their own.

30 thoughts on “Biking to School By Themselves”