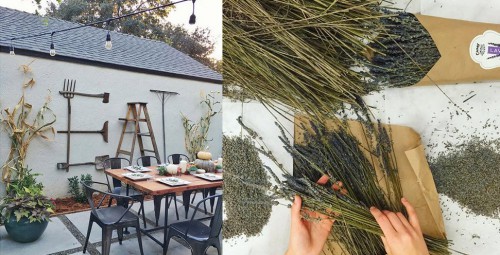 Chef Dan Barber, a leader in farm-to-table cooking, spoke at the Sacramento Public Library last week. Barber’s book, The Third Plate: Field Notes on the Future of Food, was the Library’s 2015 selection for its annual community reading event ‘One Book Sacramento’.

Barber is owner and chef at Blue Hill New York City and Blue Hill at Stone Barns, located at the Stone Barns Center for Food and Agriculture in New York’s Hudson Valley. The Center is a farm and educational non-profit located on a former Rockefeller family estate. The Center and the restaurants promote local, organic, community-supported agriculture.

Amber Stott, Director of the Sacramento Food Literacy Center, engaged Barber in conversation. She first asked him to read a passage identifying his book’s main audience – American chefs. “Today’s food culture has given chefs a platform of influence, including the power, if not the luxury, to innovate. As arbiters of taste, we can help inspire a ‘third plate,’ a new way of eating…”

The book’s title is an evolution in eating in three symbolic dinners. The first plate is an 8-ounce steak with a little vegetable and grain, symbolizing the protein-centric diet of intensive, industrialized agriculture. The second plate looks like the first, except that the beef is grass-fed and everything is locally sourced. It symbolizes the farm-to-fork movement.

The third plate is a symbol of a diet that Barber believes best supports sustainability. It is mostly vegetable and grain, with a little meat. Barber arrived at the third plate when he realized that the farm-to-fork movement was “still trying to fit into an established system of eating” that was not sustainable.

Barber told the audience about his book’s hero – Klaus Martens, a Hudson Valley organic farmer who supplies emmer wheat for Blue Hill. Martens gave Barber the inspiration for the third plate one day when explaining the crop rotations used with the emmer wheat that build and maintain soil fertility. Barber realized that, in order to fully support Martens’ practices, Blue Hill’s menus needed to incorporate the whole of the Martens farm’s produce.

So, for the last few years, Barber has re-worked his dishes to support “whole farm” cooking. His restaurants no longer have fixed menus so that he can use what is available from his growers.

One of these dishes, which he calls “rotation risotto,” incorporates all of Martens’ rotation crops. Instead of Arborio rice, the dish has rye, barley, buckwheat, millet, red kidney beans and soybeans. Before, Martens lost money on these cover crops. Now, selling them to Barber, he makes a profit.

The discussion then moved to food waste. Barber asserted that Americans are the most wasteful society when it comes to food, partly because we “have not been forced into the situation of peasant cultures of the old the world.”

Peasant cuisines of Europe and Asia are Barber’s model for his third plate. They are the product of agricultural systems that have survived over many centuries, in balance with the local ecology. Barber writes, “The limited offerings of peasant farming meant that grains or vegetables assumed center stage, with a smattering of meat.” This explains the relative position of meat on the third plate.

When Stott asked what the Sacramento Farm-to-Fork movement needs to do to move to the third plate, Barber encouraged chefs to ask themselves what will make local agriculture sustainable for generations. “Sacramento, with its leading-edge chefs, can be an example to the whole country,” he added.

Next, Barber addressed research and development in plant genetics. He first noted that flavor and nutrition has been bred out of crops in favor of yield and uniformity. He then admonished, “It is our fault that agribusiness so heavily influences breeding programs at land-grant universities like UC Davis.”

Finally, he predicted that the current structure of industrial agriculture won’t last, drawing an analogy to Beta-max magnetic tape. He said that ‘Big Ag’ was doing everything it could to hold on to current market share, even though its model is outdated and won’t lead to sustainability.

“Eaters need to drive change through their diet – we need to vote with our forks,” he urged. “We must demand organic, because the food always tastes better, and because it forces farmers into rotation crops that grow diversity.”