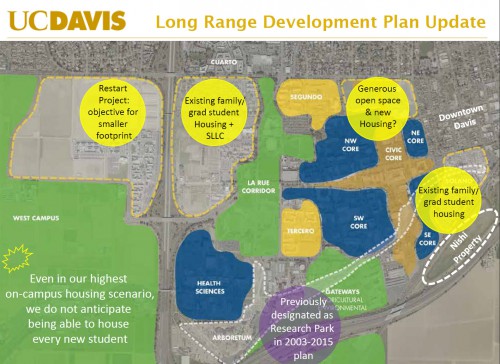 LRDP action needed, not just words – UC Davis has recently invited Davis residents to comment on their Long Range Development Plan (LRDP) update process which it did for the 2003 UCD LRDP. Historically, the public input has been for UCD to build more high density core-campus student housing. However, UCD has not taken enough action on building on-campus housing for its own rapid student population growth for more than two decades.

In 1989 UC Davis agreed to a Memorandum of Understanding (MOU) that committed to providing 25% of its existing student population and 35% of incoming students and to rely on the University to provide on-campus housing. This commitment did not happen for many years. Then in 2002, the University (system wide) produced a report “UC Housing for the 21st Century” that specified the need for more student housing on all of the UC campuses and that the system wide goal was 42% for all of the campuses. Specifically, the direction and timeline for UC Davis was to provide at least 38% by 2012. This plan for UCD student housing never materialized. UCD has one of the nation’s largest campuses with over 5,000 acres, yet has not even provided 25% of its student housing on-campus. UC Davis has recently announced that it wishes to add 5,000 more students, yet it has not even provided sufficient student housing on-campus for its current population. This is why is important that our community give input now during UCD‘s current LRDP process that it is time for the University to “step up” and actually produce the student housing it has promised for so many years. UCD’s inaction for over 26 years has spilled over to our community resulting in using a disproportionate amount of our rental housing, over-densification pressures, and the formation of “mini dorms” in our neighborhoods and the subsequent added impacts of traffic, transportation, and parking problems.

UCD claims to want “green sustainable planning” but the poor and ineffective planning by the University has brought on significant environmental impacts and planning problems to our community, including the daily massive student commuting coming from off campus, to get to the campus. It is unfair to our community and particularly unfair to UCD students, for whom the University is not providing the needed dedicated, long term affordable housing on campus, which would also reduce commuting impacts. Adding yet another 5,000 students, many of which will be from outside of the state and outside of the country (for higher tuition fees) will clearly need housing, yet the University has been silent on where these students are to live. In fact, UCD’s recent presentation at City Council specified that UCD even in their highest on-campus housing scenario they do not anticipate being able to house all of its new students.

In response to the cumulative negative impacts spilling over to the community, the 2008 General Plan Update Housing Element Steering Committee unanimously supported language which spoke to the critical need for the University to address its own housing needs. The recommended language (which was later adopted by the City Council in 2011) read:

“Prepare a joint housing strategy, Memorandum of Understanding or similar document in cooperation with UCD. Encourage UCD to increase the planned student housing to meet the UC system wide average of 38% of enrollment at a minimum (of its total student population).”

Additional language adopted by the City Council was that an updated MOU with UCD:

“Makes all efforts to provide the UC system wide goal of 42% student housing. The housing should consist primarily of core-campus, high-density student apartments that are able to accommodate individual and family student-households for the average term of student population at UC Davis.”

The committee defined the rationale and many reasons as well:

“Substantially more core campus high density student apartments are needed to provide permanent affordable housing for the entire average student term, as compared with dorms which only provide one year of housing for freshmen. “

“The reasons for high density apartment housing on-campus include:

It is important to note that UCD has also promised to provide more faculty and staff housing as well, but it has yet to accomplish that. It has provided only 2,000 of the 3,000 beds promised for students in its West Village project, and no faculty or staff housing yet. In fact, there is ongoing loss of on-campus housing including Orchard Park, which is currently vacant, and Solano Park which is to be vacated as well. Plans for if, when, and where this graduate student housing is to be replaced by the University still appear undetermined.

It is interesting that the University has shown such enthusiasm for the Nishi proposal, but it is more evident now that it is the 650 apartment units that the University is most interested in. However, since these apartments would be in the City, not on-campus, they cannot be legally reserved, nor rent controlled for students to be affordable long term. Only the University can legally dedicate and control the affordability of student housing built on their land, so the long term solution to student housing need is for it to be built on University land, not in the City. So the Nishi proposal is not a good solution for long term affordable student housing, plus its recent fiscal analysis has revealed that the Nishi project is a fiscal loser for the City even with its small innovation park portion. These deficiencies together with the significant access issues make the Nishi project a losing proposition for the community, bringing major impacts, rather than real solutions. One consolation is that at least our community gets to weigh in on Nishi since it is subject to a Measure J/R vote. (Note: the Nishi Draft EIR mentions that the UCD LRDP adds another 7,000 students between 2025 and 2030).

UC Davis needs to put any further increase in their student population on hold until they determine how and when they are going to house them on UC Davis land. UCD claims to want to do “green sustainable planning”, however its inaction in building sufficient on-campus student housing has caused significant environmental impacts on the Davis community. Sufficient on-campus student housing would significantly reduce traffic, transportation, parking, air quality problems and other impacts on our community and our City planning.

The University has tried to use the “economic downturn” as a reason why they have not completed building their West Village project residential housing. Yet in recent years the University has built a significant number of new buildings on campus, including a new art center and a new music center in progress, as well as many landscaping and other improvement projects. But their student housing needs have clearly been ignored, for both UCD’s existing and projected increases in student population. With UCD’s recent announcement of having reached their $1 BILLION dollar goal in endowments, there should be no excuse for the neglect in building high-density student apartment’s on-campus (i.e. not more one year dorms for freshmen only). UCD, clearly, can find funding when it wants to.

Since this issue affects our community and City planning, I urge the public to participate in the UCD “open house” meetings and give your input that UC Davis needs to take action to build significantly more high density student housing on-campus now. After almost three decades of delay, it is time for the University to take responsibility of providing the housing needs of their students, rather than deflecting them onto our community. It would be helpful to also email your comments to Assistant City Manager Mike Webb at MWebb@cityof davis.org.