Before a large crowd at the Veteran’s Memorial Theater, Joe Minicozzi came to Davis Tuesday to do two talks in a program called “Dollars and Sense.” One of his central points was to show how land use policies generally create inefficient uses of land. One of the starker models he demonstrated is that, downtown, mixed-use land produces far more revenue per acre than the types of economic uses many communities promote, in particular big box and malls.

The question is how does this model apply to Davis? 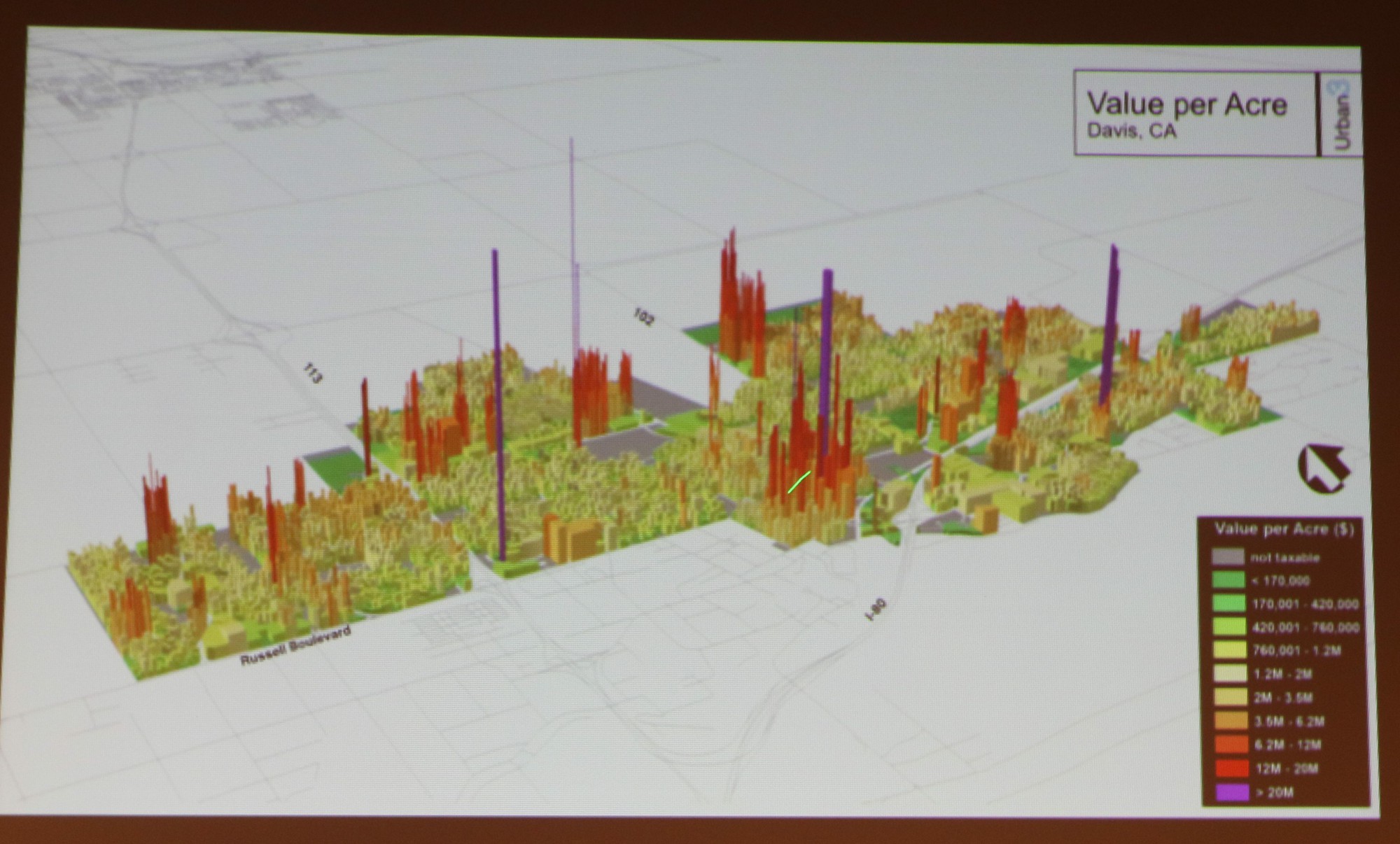 Joe Minicozzi showed the model of Davis, where most of the big and high density tax dollars are clustered in the downtown as expected. There are a couple of interesting “purple” spikes outside of the core area, mostly representing high-density housing.

Mr. Minicozzi acknowledged he did the analysis relatively quickly. The map was telling. One problem the city has is large swaths of gray which is untaxable land. Some of this is owned by the university.

Another interesting feature is that Target and the area along Second Street does not show up as a high value per acre. Some of that is due to the Walmart effect. Target, while it is LEED (Leadership in Energy and Environmental Design) Certified, is certified at the lowest level. But, more importantly, there is a lot of wasted space.

Later in the presentation, Mr. Minicozzi showed a model grocery store from back east, Publix, where the parking was actually on top of the store, so the footprint is compressed. Right now, Target may generate the city sales tax and property tax, but most of the parking lot, a huge expanse, is unutilized as a value generator. 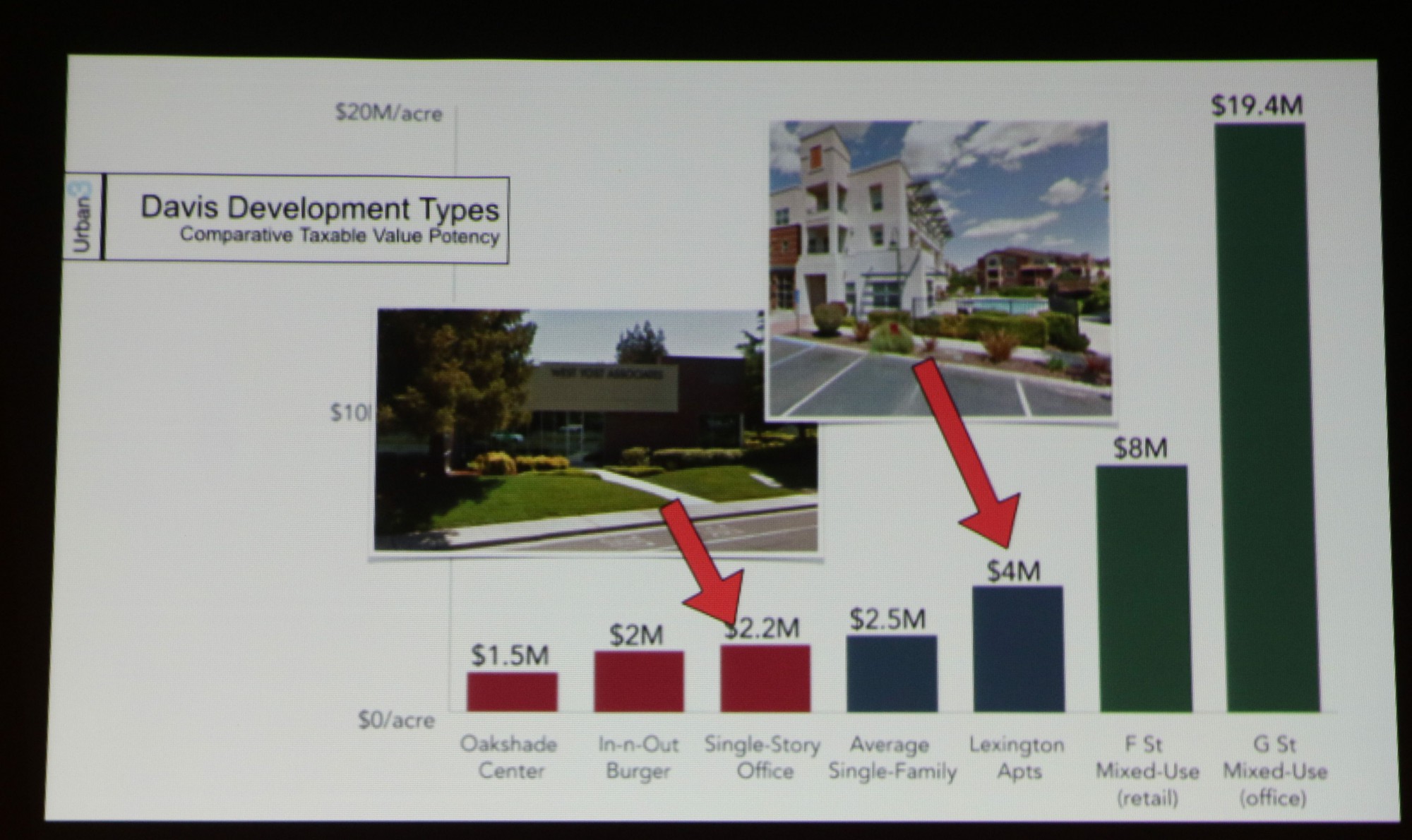 Joe Minicozzi walked the community through places that generated poor value versus good value. The Oakshade Town Center sits at $1.5 million an acre, and In-N-Out Burger at $2 million, but the average single-family home on the other hand generates $2.5 million per acre. The Lexington apartment complex is double a single-story office building. The best utilization is the F St. mixed-use which has retail below and hotel above, and then the G St. mixed-use is off the chart at $19.4 million per acre. 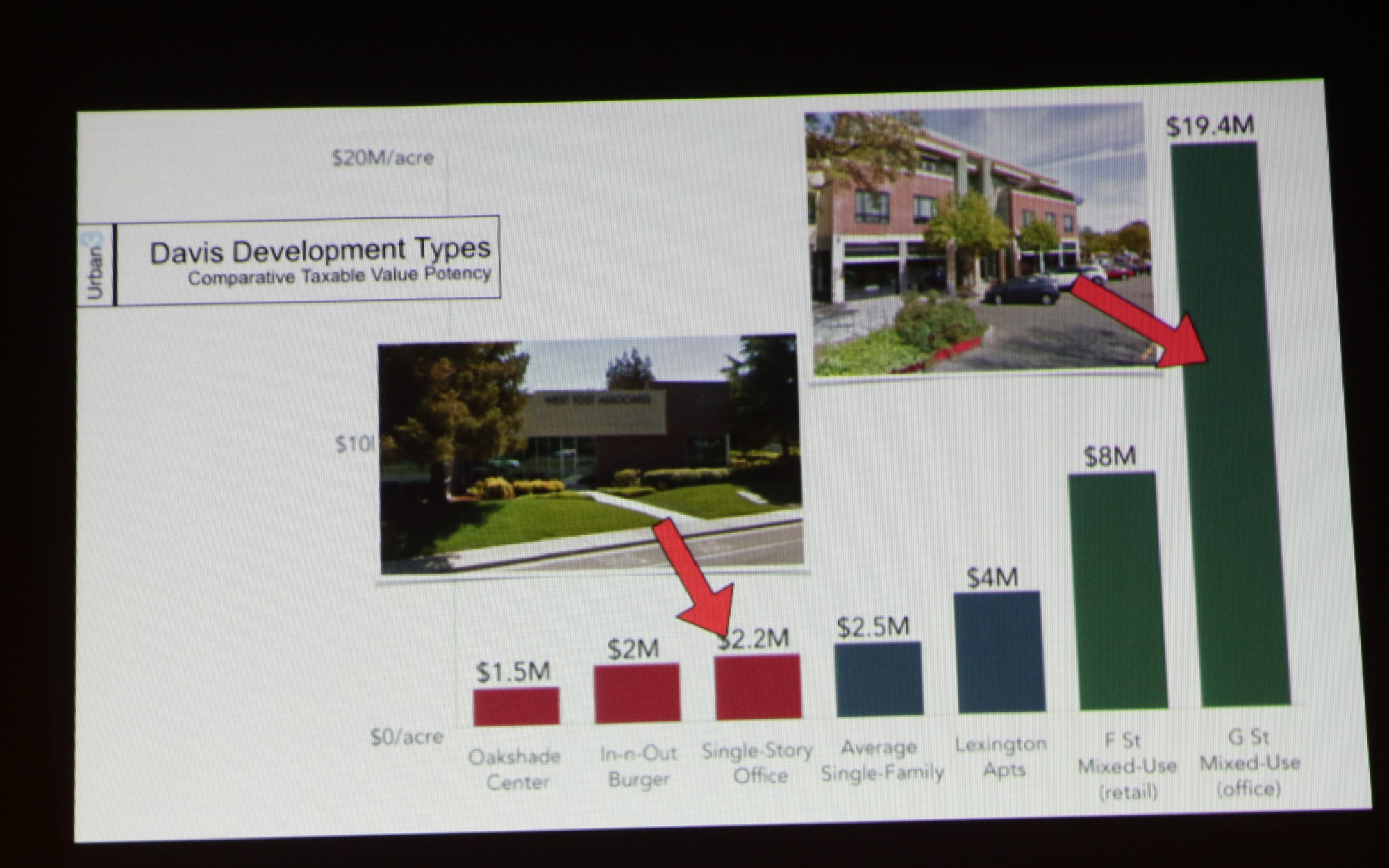 He said, “People say once you have this data, what do you do with it?” He said, for one thing, you need more purples here.

Mayor Pro Tem Robb Davis during the panel discussion stated, “I think we have an opportunity to see our city differently when we see pictures like this.” He said one of the take away messages he got from this is “[i]n our decision making processes, we use a variety of things… the way we have always done it, we tend to look at gross numbers, often we don’t look at rates or proportions at all. What the challenge to me here is, that by looking at data in a new way, we have an opportunity to step back from the biases and rules of thumb that heretofore maybe guide our decision-making and try to bring to the surface exactly what is driving our decisions.”

The mayor pro tem noted that we need to start modeling actual costs in a geographic sense. He noted that, as we push out to new areas, there are greater costs for the infrastructure. “I think looking at costs, not just of service provision but cost of the infrastructure that will have to be repaired and how we model it,” he said noting costs with fixing the roads. “But do we think about it in terms of the costs based on the location of that infrastructure?”

He said this is not a push for new tax differentials, “but I do think it’s worth examining what’s generated on the city versus the costs of moving in that direction.”

The mayor pro tem also noted “all of this non-taxable land in our city.” He called UC Davis “a wonderful asset.”   He said, “There is a cost when the university purchases or significantly leases properties” that can be removed from the tax rolls. He wants to analyze “the costs and benefits of sharing the space together.”

While there are many advantages to partnering with the university that Robb Davis cited, he said we also have to be mindful that there is the potential for losing that space as a revenue generator when the university does occupy it.

“Seeing data presented in this way… opens up all our minds to different ways to model other data,” he said. “We’re not just concerned about revenue value per acre. We’re also concerned about things like revenue per ton of greenhouse gases emitted by property.”

Bob Lindley, an architect in town since 1988, also spoke. “I’m completely blown away by what I’ve seen (in the presentation),” he said. He noted that next time he presents a project to council or the planning commission, he will reference some of the benefits to downtown development and other types of development that brings more density.

“We are not just talking about more density for Davis, but what is appropriate to increase the city of Davis in a way that can be attractive and a place that’s wonderful to live,” he added.

For them it is opportunity driven, as “we are given a site and asked to make the most of it.” At the same time, architects have a commitment to ideals such as sustainable architecture.

“For mixed-use to work well, it really has to have the right location to begin with. We rely on good planning guidelines, we rely on zoning to inform where we will build a building and what size it will be,” he explained. “There’s a lot that can happen in Davis to make that process a little bit more flexible.”

Former Mayor Joe Krovoza stressed that he is neither in office nor running for office as he gave his remarks. He noted that the previous council brought in former City Manager Steve Pinkerton “because Steve knew how to run the numbers on projects and every single project that came up and Steve and I were sitting in his office thinking about the infrastructure costs and thinking about the revenue we would generate.”

He said he was delighted to hear Joe Minicozzi speak, but also noted that this type of thinking does go on in this city.

Mr. Krovoza shared what he called “the incredible constraints” that we all live with in Davis. He said, while there are lots of areas where we might see opportunities to redevelop, “in Davis we have a very conservative land owner population, downtown and otherwise. People have legacy properties that they’re making very nice revenue off of and the idea of tearing it down, building it denser and financing it and crossing their fingers that they’ll find tenants for it is pretty daunting.”

He referenced the 3rd and 4th and E and F parking garage, which had redevelopment money which was about to go away backing it. He said at the time he was interested in the project “if we [could] get the land owners on the Third street side or Fourth Street side to play so that we [could] build something that’s truly innovative – and you know what, we couldn’t do it.”

He said, “We had redevelopment money, we were going to give them parking and… they wouldn’t budge.”

He said, “It is very hard for the city often to make the infrastructure (costs) pencil out when the county is getting such a nice percentage of revenue.”

Another factor, he said, is that there is regional competition, and many businesses want single-story buildings. “We can’t say to an industrial company we have this really cool land downtown and we just need you to go up five stories when there’s a community neighboring us that might say yes, you bet.”

The former mayor called the Cannery process “terribly disappointing.” It took the former city council six months to “agree to a pro forma to calculate the amount of profit that the Cannery developer was going to make.” As mayor he refused to negotiate a developer agreement until we knew some sense of what the profit would be on the project.

“We have to have a council that will have people like you telling them to negotiate hard,” he said.

Share:
Tags:DavisEconomic DevelopmentJoe KrovozaJoe MinicozziLanduseRobb Davis
Previous : The Bane of Prosecutorial Misconduct and What One Man Has Done To Change It
Next : Enhanced Driver’s Licenses Would Be A Privacy and Civil Liberties Nightmare