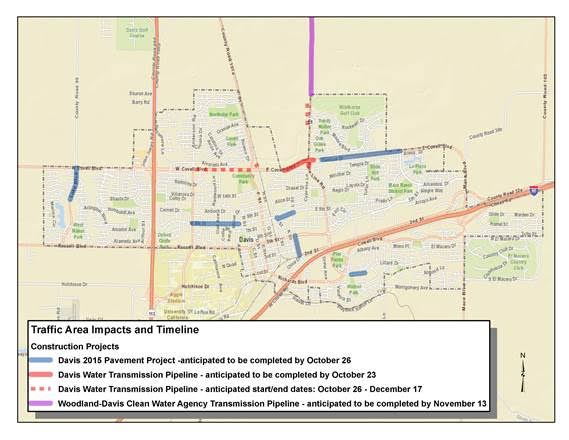 The city has been getting an earful of complaints about the road construction. I get it that it can be inconvenient to be delayed, but these road repairs have been put off so long due to lack of funding, we were at a crisis point. Not only are the repairs going to make our roads better, but they will prevent the road conditions from further declining.

Nevertheless, I have seen many complaints over the inconvenience and the city was forced to put out a release yesterday afternoon addressing the issue.

Wrote the city, “The City is in the midst of two concurrent construction projects which are impacting traffic across Davis.  The Pavement Rehabilitation Project includes improvements to six streets and the Surface Water Pipeline Project is installing water transmission lines to receive and distribute surface water to improve reliability and the quality of Davis’ water supply.”

They city notes, “Both projects have been in the planning and design phase for years. Due to funding, bidding and contracting, and construction delays, the projects unfortunately began construction during the same time frame.  It is rare for the City to experience this much concurrent construction.”

Mayor Dan Wolk issued a statement: “We have a lot of road work going on and I know its inconveniencing people as they try and make it around the city.  Believe me, I’ve heard them loud and clear.  And city staff has heard them too.”

He continued, “Right now we are focused on getting the word out about where the construction is happening. How long the work will be going on, etc.  I am sorry for the hassles this work has caused but ask for your patience and to know that in the very near future you will be driving on wonderful new roadways and drinking from a new, sustainable water supply.”

Actually I believe the mayor is being too nice here – I think the message should be: stop whining and complaining, we’re finally fixing the roads that everyone has been complaining about for so long.

Perhaps it has just been too long since we have seen road repair in Davis. I cannot honestly remember the last time real road repair occurred here.

The one thing that did have me a little puzzled is why the city would do this now, as opposed to July when there are fewer cars in the city and less places that people have to go.

Bob Clarke from Public Works made it clear the city staff “is very aware there are unhappy residents due to the construction work going on, especially the pavement maintenance work.”

He said, “The Department’s original desire was to bid the project in late winter and have a contractor on board to begin work as soon as school was out for Summer break.  Work was expected to take three months and would be done in September, only a little overlap with the start of the DJUSD school year.  “

The problem of course is that the window here is very short “while school is out and it is not long enough to complete all significant construction activity.”

Moreover, “We experienced some delays in the design phase this year and the project wasn’t put out to bid until May, which pushed the schedule back a month, leaving us to finish up at the end of October. Work began in July with the replacement of the Community Park path from the tennis courts up to Covell, then shifted to the street work in September.”

That is compounded by the fact, “This year we focused on completing some of the main arterials in the central part of Davis and clearly the traffic impacts have created a great deal of frustration with some of our community.  While construction impacts are unavoidable, staff tries to minimize them while balancing the cost of overly constrained work requirements versus the impacts to the community and the cost of the project.”

He wrote, “With the Council just recently increasing the amount of funds available for pavement maintenance, this was the first year we’ve put out a $3M+ project.  We’ve learned a few lessons from this years’ experience and will make adjustments in future contracts to reduce the impacts and not concentrate the work on key roads in one part of town.”

Mr. Clarke added that the bulk of the pavement maintenance should be significantly complete in two weeks.

As the Vanguard has been warning for years, the roadway conditions in Davis have been deteriorating to the point where a large number are on the verge of failure.

In 2013, the city learned just how bad the situation was, with streets approaching 60 PCI (Pavement Condition Index) and on the decline of about two to three points per year with no intervention. The city was originally expected to take out a bond to infuse up to $20 million into roads.

That did not happen, but the city has put together $4 million a year in general fund money and this year, for the first time, it has been able to let contracts.

The delay factor is problematic from the city’s perspective, but I think the bottom line is – and the city can’t say this, so I will – we have to deal with this problem and a few minor inconveniences are not going to harm anyone. I spent my week having to drive my kids to and from schools next to construction. It’s really not that bad as far as delays go. In the long run, we will have better roads and a smoother ride.

Share:
Tags:City of DavisDeferred MaintenanceRoad Repair
Previous : Is Risk Assessment The Key to Reducing Incarceration?
Next : My View II: Death-In-Custody Incident Puts Us to Another Test

25 thoughts on “My View: Road Repair is a Necessary Inconvenience”