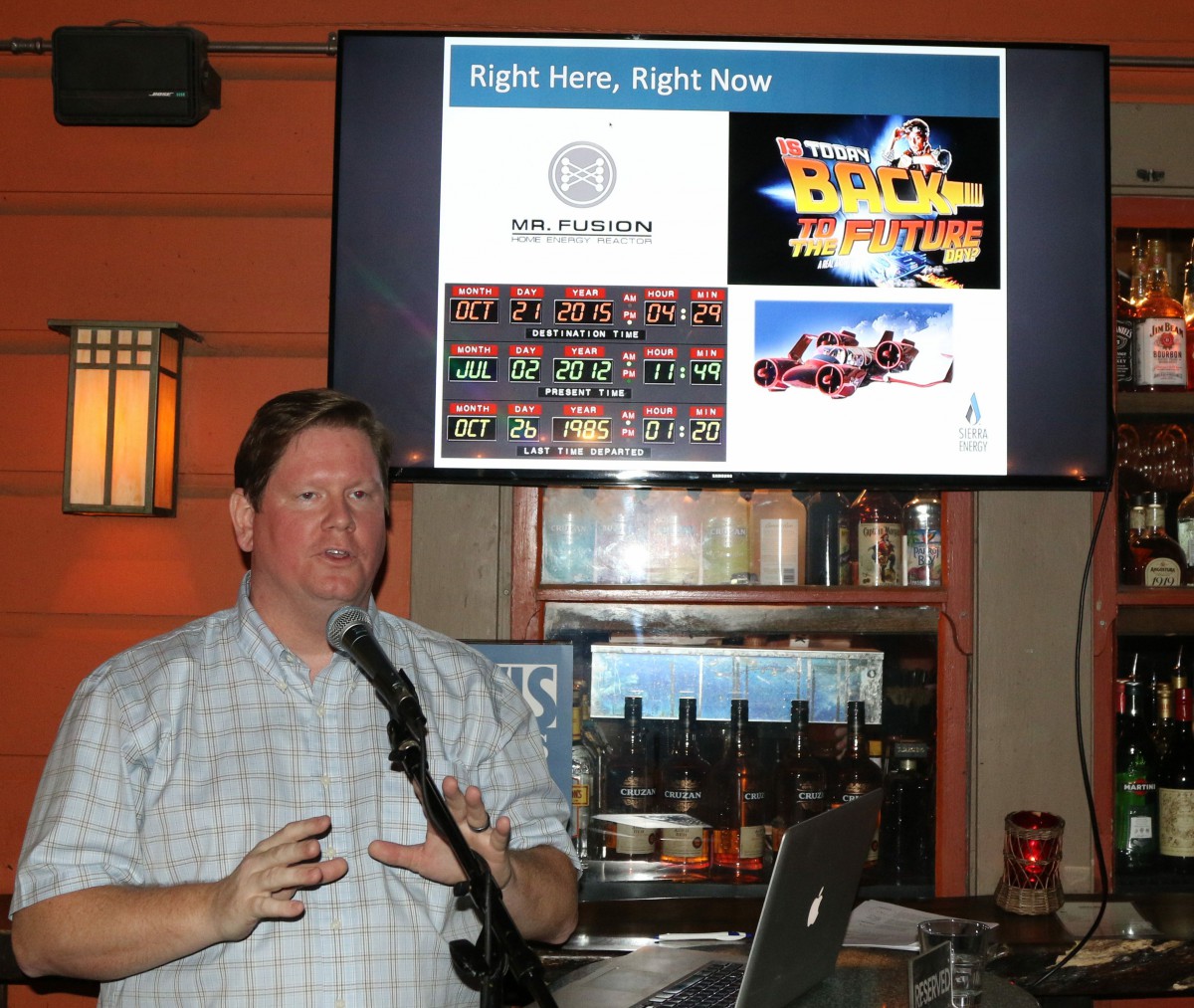 Former Chief Innovation Officer of the city of Davis, Rob White, on Wednesday evening talked about his new gig as Chief Strategist at Sierra Energy and the innovative programs they are doing.

“What I want to talk to you about tonight is a nuisance – trash,” Rob White explained. “We hate trash. We hate waste. We the city of Davis are a sustainability community, we have a problem.” He explained that Yolo County collects over 500 tons a day of waste. Most of this ends up in the landfill, some gets put into recycling.

For much of our waste there is no other option then it ending up in the landfill. Something, he explained, that “is a problem for society.”

Rob White explained that many European countries are forced to burn their waste, and “that’s a horrible idea because it creates more toxic waste.” It is not that landfills are bad, instead, “when we put something in the earth there is a life cycle and a cost to that.”

In California, he explained that we have a goal by 2020 of recycling 75 percent of our waste. We may or may not reach that goal. Part of the problem is that even material which could be recycled is often contaminated or otherwise will not be broken down, and therefore it ends up in the landfill. Moreover, the landfill doesn’t have the ability to separate out materials that will break down from those that won’t.

Rob White offered two solutions on “Back to the Future” day.   He asked, “What if we could actually put together a process, here in Yolo County, where it goes to the landfill, it gets separated, diverted, recycled, converted, reused, and then everything that’s left has a process and something that it can go to..”

Everything that is not going someplace would end its life cycle by making two new resources. “We here at Sierra Energy are interested in doing what we call a Zero Waste Innovation Park,” he said. “The idea behind that is total waste immersion – not a single thing goes into the landfill from this point forward.”

Rob White explained that Mike Hart, the owner of Sierra Energy, wants to this right here in Yolo County. 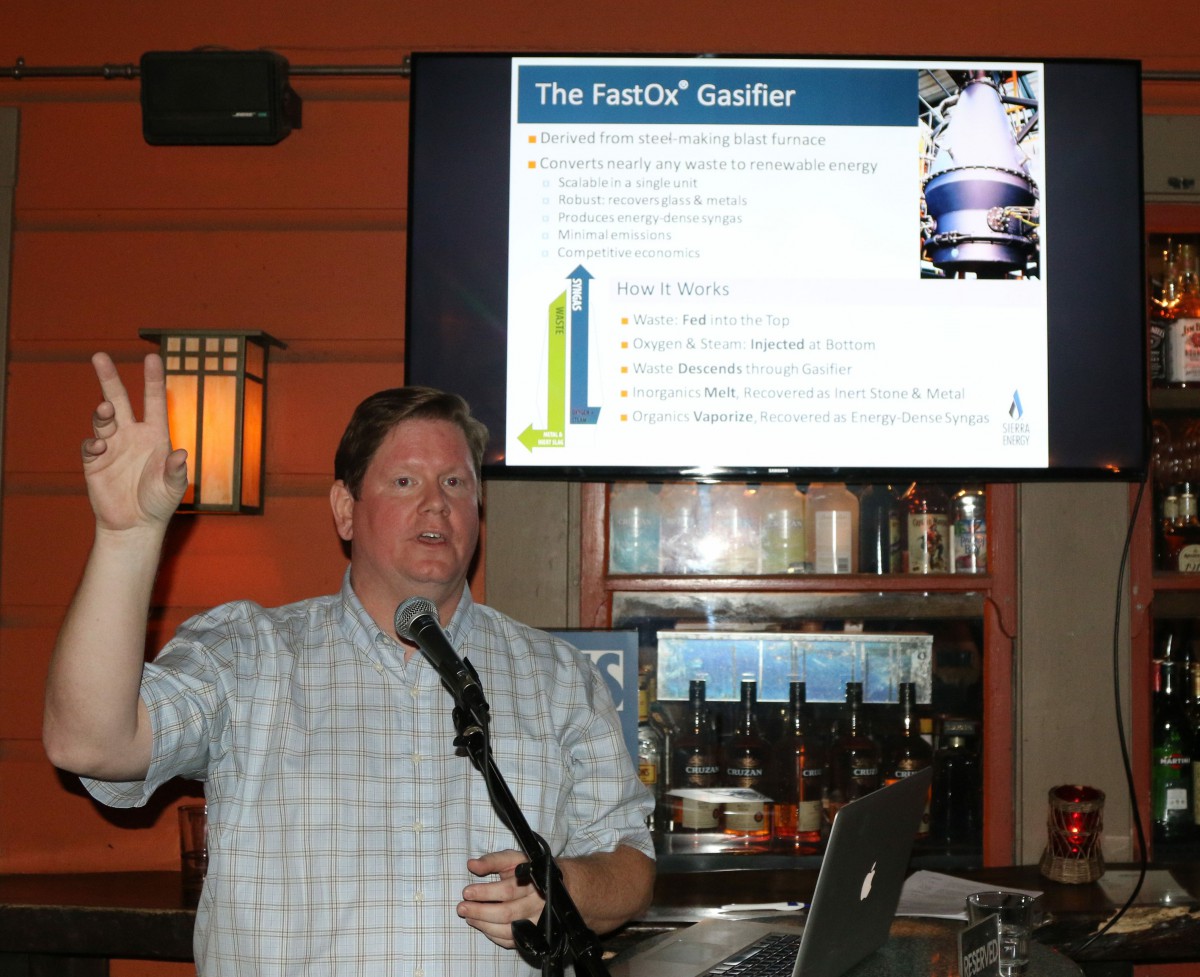 How do they create this opportunity? “We think the answer is what we call the FastOx Gasifier,” he explained. He explained, “It means just this: we take heat and melt and we make gas and glass.”

In their system, they don’t combust or incinerate anything. “We move it through a process,” he explained, where they heat it to 4000 degrees, something he likened to a “mini-volcano” and out of that “we get two products. We get synthetic gas which is about 30 percent hydrogen and 70 percent CO (carbon monoxide). And the rest of it is glass.”

He said medical waste, construction waste and ag debris “can all go into this process.” Even after they have been recycled and reused, “there’s still a lot left.”

Rob White explained that their first customers are the California Energy Commission and the Army. They are building this down near Monterey. “For this price, we can actually build something that would end the life cycle of waste,” he said. 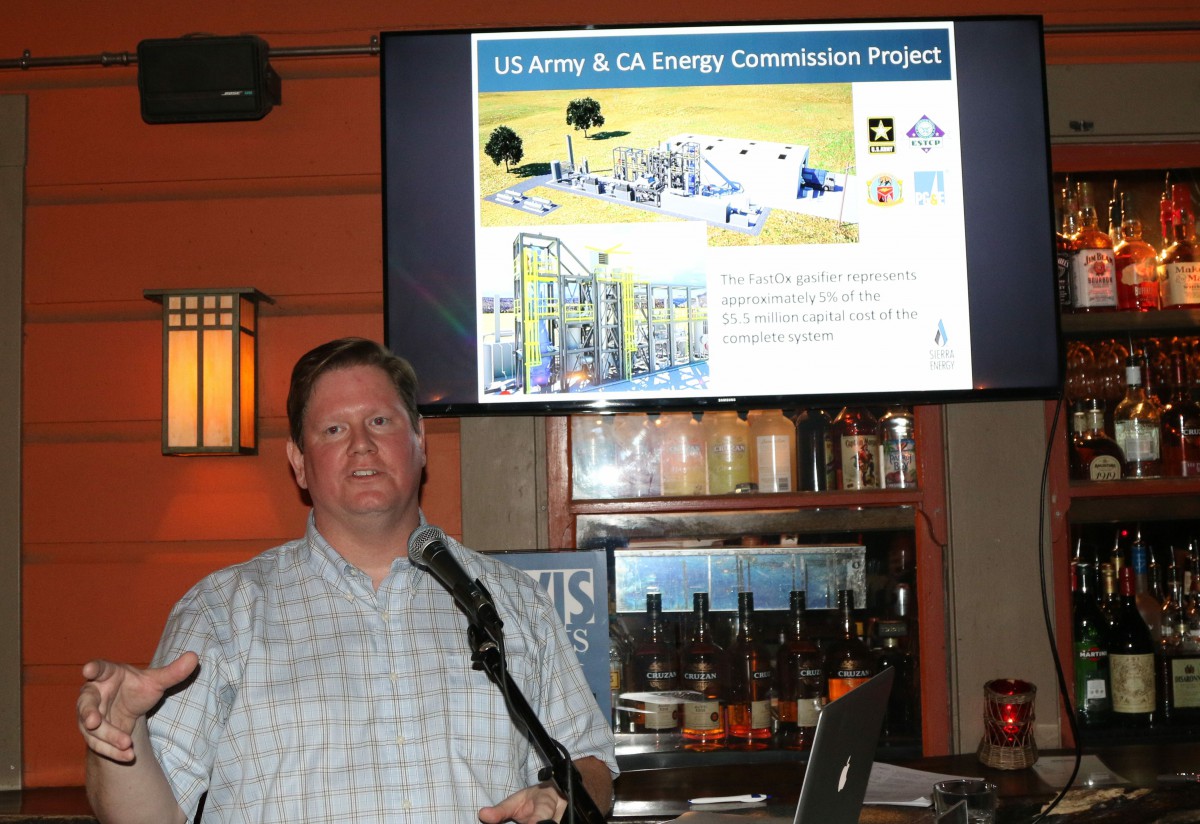 He reiterated, “We are going to heat and melt and make gas and glass and create energy somewhere in the Sacramento Region. Again, our preferred location would be hopefully in here in the local area – Yolo County landfill would be an excellent partner but beyond that it’s going to be something that’s going to generate an opportunity space.”

Mr. White said, “What’s one thing that Davis is passionate about? Energy. We want to be energy-independent… What if we could generate energy that has a lower carbon potential right here from our waste and have that sold right into the local community? “

He added, “We’re literally changing the life-cycle costs of how we generate energy.”