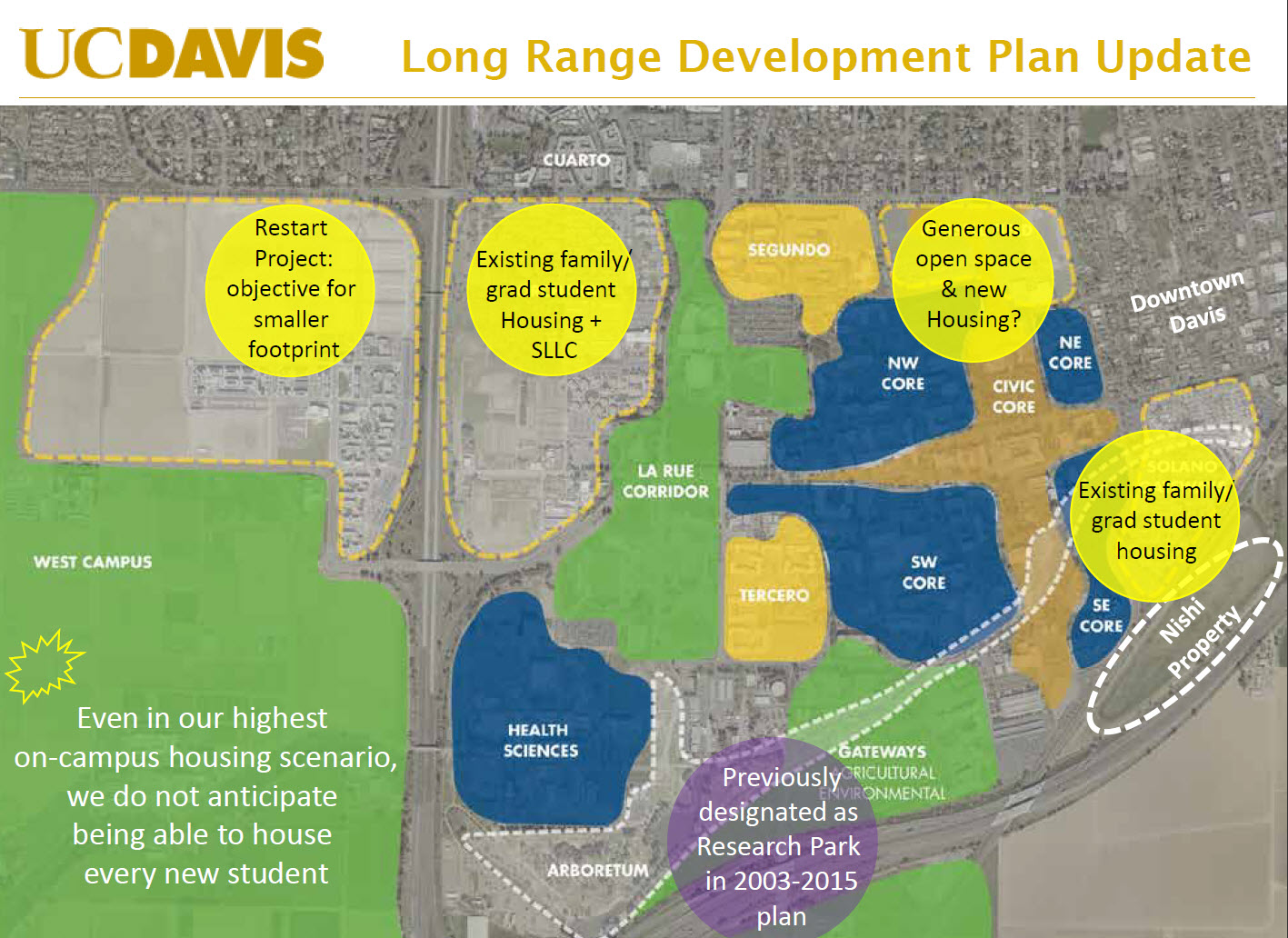 In the coming months, we will undoubtedly focus on the statement, “Even in our highest on-campus housing scenario, we do not anticipate being able to house every new student.” Undoubtedly that will push the issue of housing back onto an already-impacted rental housing market.

However, an even bigger announcement likely would have slipped by many in the community unnoticed. On the south end of campus, southwest of Nishi and into Solano County, the area was previously designated as Research Park in the 2003-15 plan. Mr. Segar announced that that area is no longer being considered for a Research Park

The Vanguard was previously aware of fairly high level talks between UC Officials and local economic development interests and developers about the possibility of a large innovation center going into Solano County.

From the standpoint of the university this made sense. UC Davis is pumping $1 billion of research money and much of that research is being pushed out into the private sector through technology transfer. However, while UC Davis has the intellectual capital, the city of Davis lacks the space for some of these endeavors. That is one of the driving forces behind the innovation park push in the city.

However, as everyone knows, Davis’ citizenry is skeptical of growth. The city has policies like Measure R that require citizen votes to approve new development outside of the current borders. While Davis has some areas in consideration for innovation centers, like Mace Ranch Innovation Center and the Nishi Property bordering UC Davis, already one of the proposals has been put on hiatus.

By going into Solano County, UC Davis could have bypassed land use battles in Davis.

For Davis this might have been the worst of all worlds. Building a large innovation center, of potentially 1000 acres, would have dried up the potential for MRIC and others in the city. The city would therefore no longer have access to jobs in the city or the revenue generated by the center.

On the other hand, Davis would feel the crunch of traffic impacts and demand for housing and other city services. One scenario might have even seen residential projects cropping up in Northern Solano County to serve the innovation center, creating de facto sprawl that Davis would have no ability to control.

Clearly, this was a worst-case scenario – but plausible.

Why did UC Davis take the idea of a research park off the table? Assistant Vice Chancellor Bob Segar did not immediately respond to the Vanguard’s request for information on this.

One possibility is that the focus of UC Davis right now is developing the Sacramento Campus. Three weeks ago, the Sacramento Bee, covering the UC Davis Convocation Event at the Mondavi Center, announced plans to build graduate programs in downtown Sacramento as part of its “University of the 21st Century” plan, which includes an estimated $2 billion in construction projects.

The Bee quotes Chancellor Katehi stating, “As a land grant institution and the public research university of this capital region, it is our obligation to be at the cutting edge of these efforts and an additional campus in Sacramento is essential to those efforts.”

Writes the Bee, “Although Katehi made no mention of the downtown Sacramento railyard in the speech, she told The Sacramento Bee last week that the site remains among a handful being considered. The satellite campus would include two new schools, one focusing on population and global health and another a public policy institute. The schools would offer master’s degree programs, but could be expanded to undergraduate programs in the future depending on demand, Katehi said.”

“We want to be visible,” Chancellor Katehi said in an interview with the Bee. “We are the only UC so close to the state Capitol. … We need to create a name and a brand in the policy area. Whether it is food, water, energy sustainability or health, I think we can play an amazing role. That is my goal.”

While that seems to be the focus of UC Davis, clearly that is not a plan to develop an innovation park. The Railyards, located just north of the Sacramento Downtown, are a 244-acre site. Already Kaiser has agreed to utilize 18 acres of it. UC Davis is long-believed to be interested in that spot for the World Food Center. Whether it could become an innovation center for the university remains to be seen.

Meanwhile, the Sacramento Business Journal gave a sobering view of the progress that Barry Broome, CEO of the Greater Sacramento Area Economic Council, has made in pitching the Sacramento region for moving San Francisco-based technology companies.

The Business Journal writes, “Broome still gave his investors a sobering outlook Wednesday on the long-term challenge of recruiting business from the Bay Area.”

They said about Mr. Broome, “He focused on economic data that shows Sacramento has an abundance of young, professional workers, many of whom commute three hours to the Bay Area each day because they can earn up to 50 percent more income. The data also showed the Sacramento region has a lower median age and far lower real estate costs than the Bay Area and Seattle.”

Whatever the reasons, the decision by UC Davis not to push for its own research park on the south end of campus is good news for the city and gives current plans time to get public support for a vote perhaps still a year away.