On my way to the Vanguard office on Thursday morning, I decided to cut down K St from 5th Street to 3rd Street. When I arrived at the corner a bus arrived at the same time as me. There were about six or seven people waiting to get on the bus.

Much to my chagrin, I found that the bus stop was almost right at the corner of K and 3rd and when the bus stopped there, it blocked the intersection for any car wanting to turn right. It stayed there long enough that I decided to take a photo of it.

When I got back to my office, I reached out to Unitrans General Manager Anthony Palmere. He explained that Unitrans works closely with the city in order to locate its bus stops. As one might expect, “there are usually several tradeoffs involved in each location.” 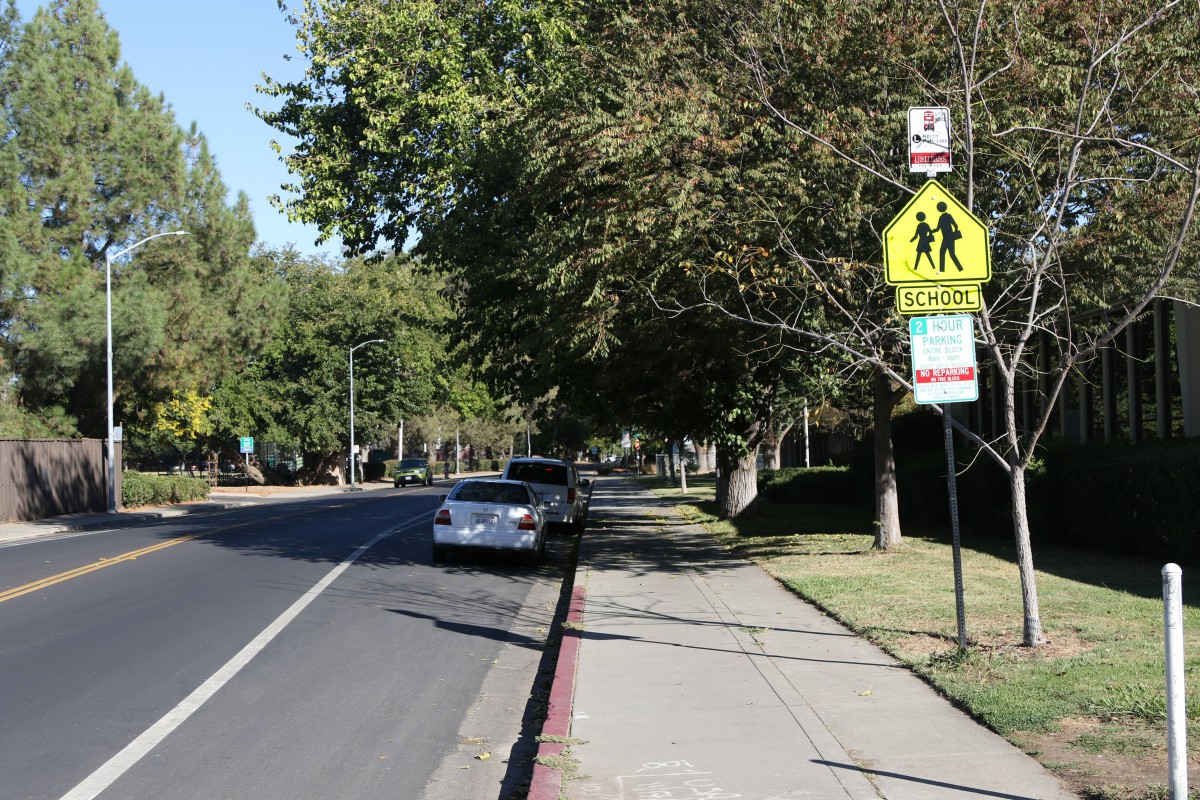 Mr. Palmere met with the Vanguard on Monday and we walked around the downtown. We saw a number of different configurations.

Mr. Palmere explained, “If possible, it is placed far enough from the corner, so that it does not block traffic on the cross street as you experienced.”

Here, just to the south of the DJUSD, you can see an example of a bus stop that is on the far side of the street, which enables people to cross behind the bus where they are visible. It is also far enough away from the intersection that it is not blocking traffic.

Unfortunately, not all set ups are as ideal as the one on B Street.

Mr. Palmere explained, “There are two things that limit that, and both are present at 3rd and K Streets. “

First, is the presence of parked cars. As one might expect, “The City and nearby residents are often reluctant to eliminate on-street parking spaces to accommodate a bus stop, which is only at a stop for a relatively short period of time. Therefore, many bus stops in Davis are very short and the bus must stick out into the street during the times it is stopped there.”

“In the case of 3rd and K, though, the more significant issue is accessibility for people with disabilities,” Anthony Palmere continued. “Because the area further west of the intersection is grass, even if the parking were removed, the bus would not be accessible if it were to stop further west. In that case, the pavement would need to be extended an additional 40 or more feet so that the bus could pull in there and be clear of traffic. This would be a costly project and might also require the removal of shade trees and other landscaping. So, that is the main reason why that bus stop is at that corner and blocks traffic.”

“There are certainly other cases where the bus stops in Davis are awkward and result in auto traffic being delayed while the bus is there. Although you were delayed by a significant amount of time this morning, in the grand scheme of things, these types of delays are relatively short and the cost of eliminating them would further tax the City’s budget for street construction and maintenance,” he said.

Anthony Palmere showed the Vanguard a number of different stops and discussed the considerations involved. 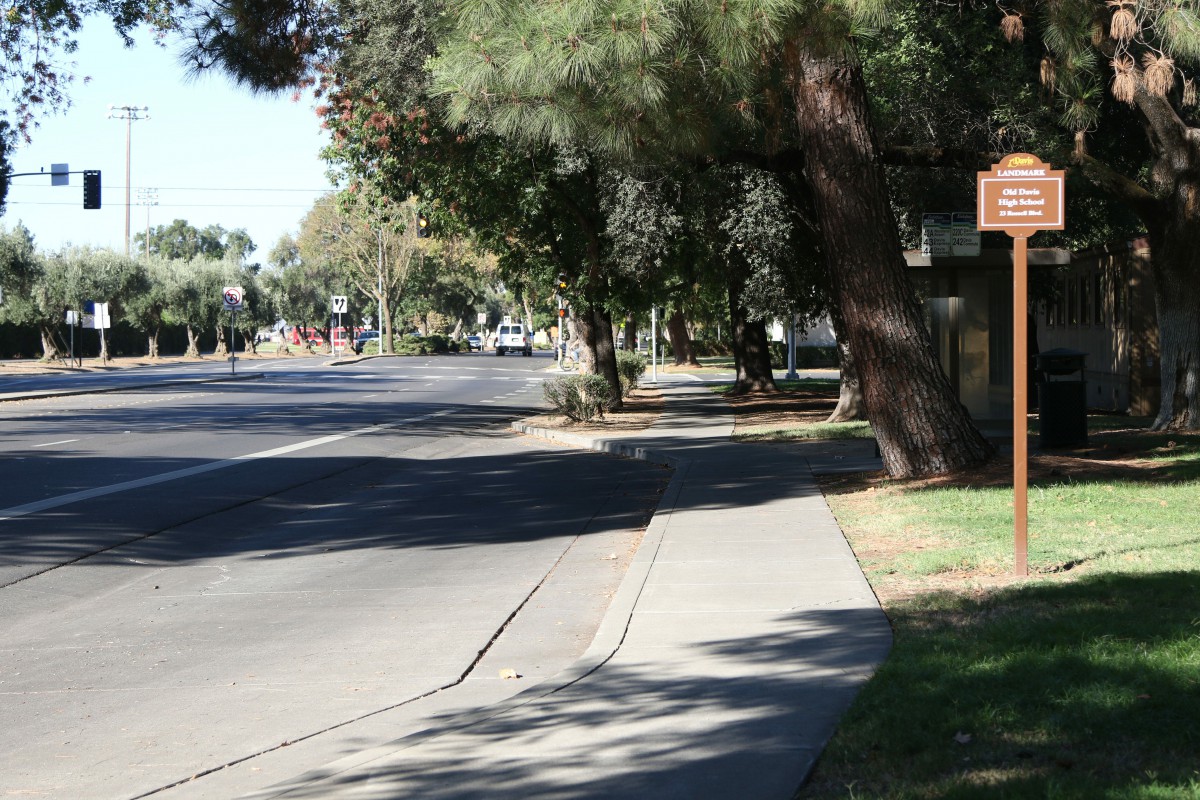 Here is the stop in front of City Hall. Mr. Palmere explained that he is not a fan of it as he believes the cutout is a waste of otherwise productive space. While it allows the bus to get out of a busy traffic lane on Russell, it creates problems when it has to merge back onto the main traffic lane, causing delays to the traffic and the bus. 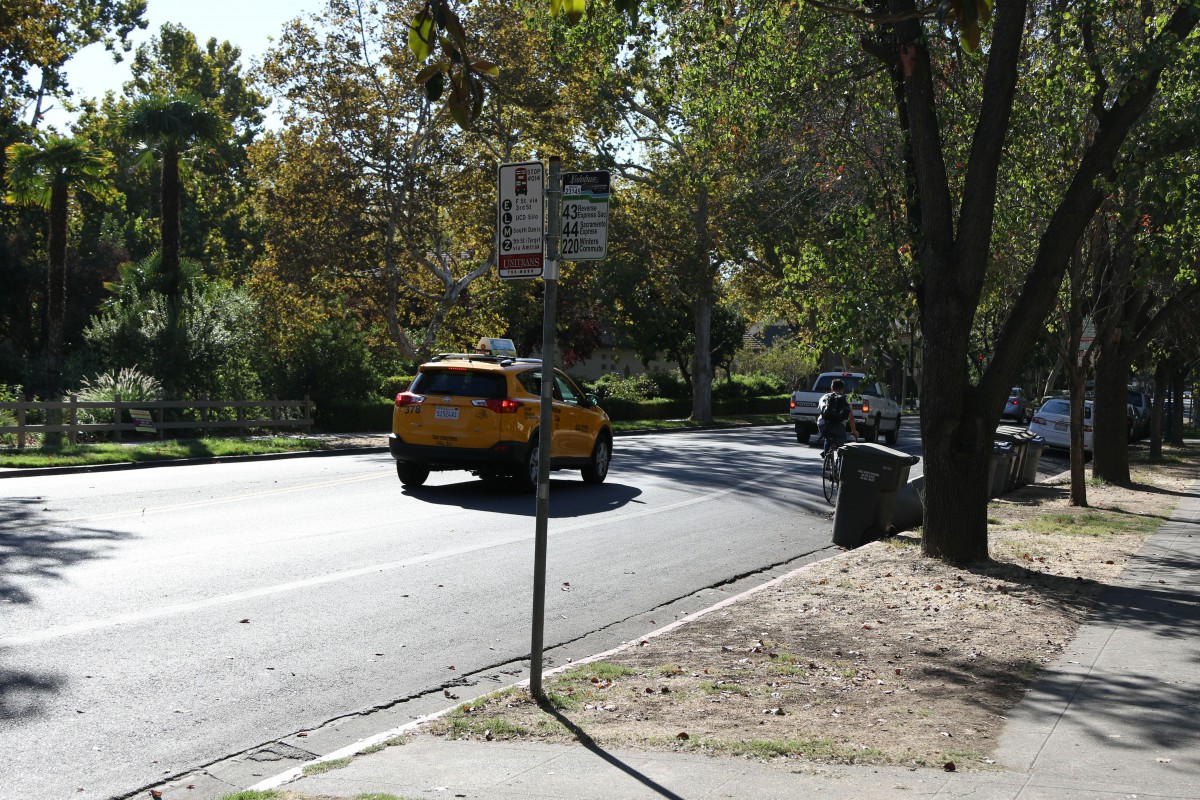 This is on B Street across from Central Park. This is a similar set up to K Street, except the stop is further down and they have eliminated some parking in order to accommodate the bus stop. 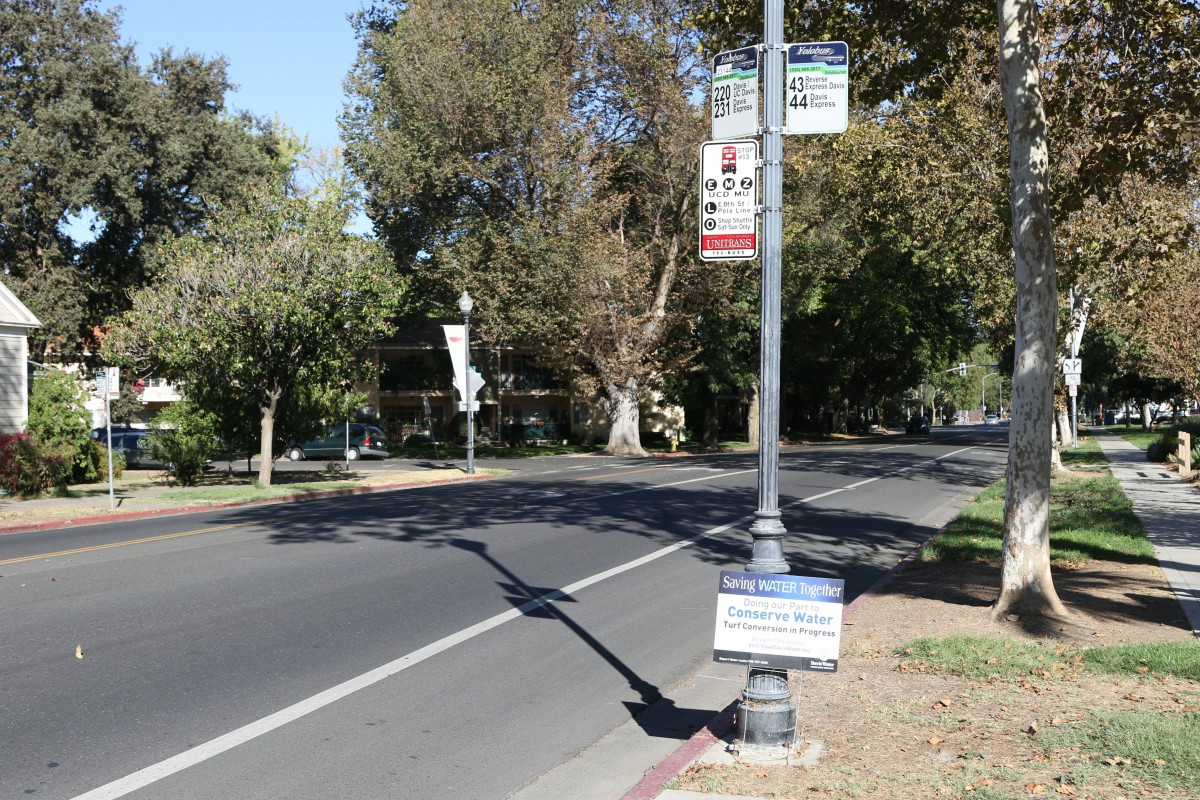 This is the other side of B St, with a similar set up. The bus can simply go into the bike lane, and make its stop. 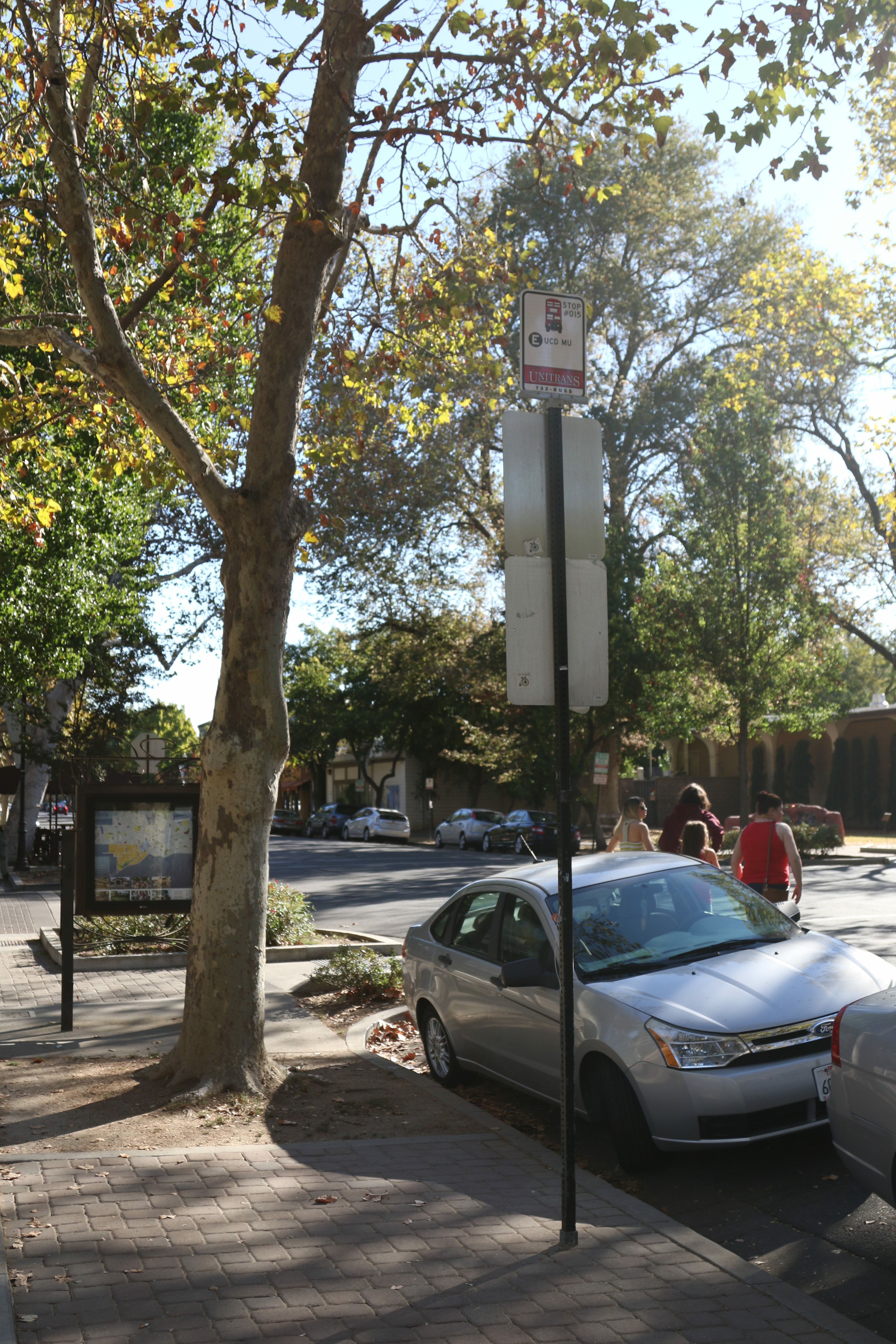 It gets more tricky here at the corner of 3rd and C. The bus stop is blocked by parked cars. Mr. Palmere explained that when there are no passengers with disabilities, the bus can simply stop here and allow the passengers to exit in between the parked cars. However, if someone needs to use the ramp, they have to stop at the crosswalk cutout, blocking traffic. 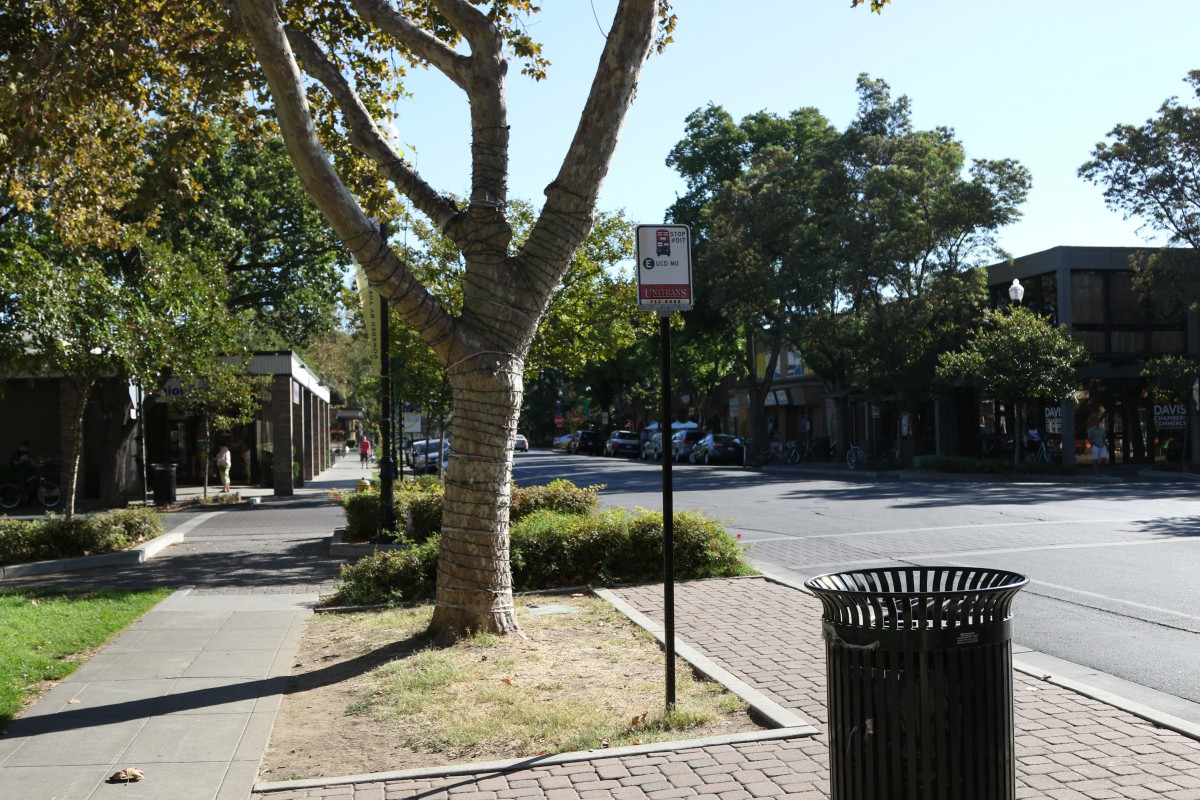 Here at 3rd and E, the bus has direct access to the sidewalk via the bulb-out. Mr. Palmere explained that these features have greatly enhanced the safety for bus riders as it provides an easy and safe exit and access point to the bus. 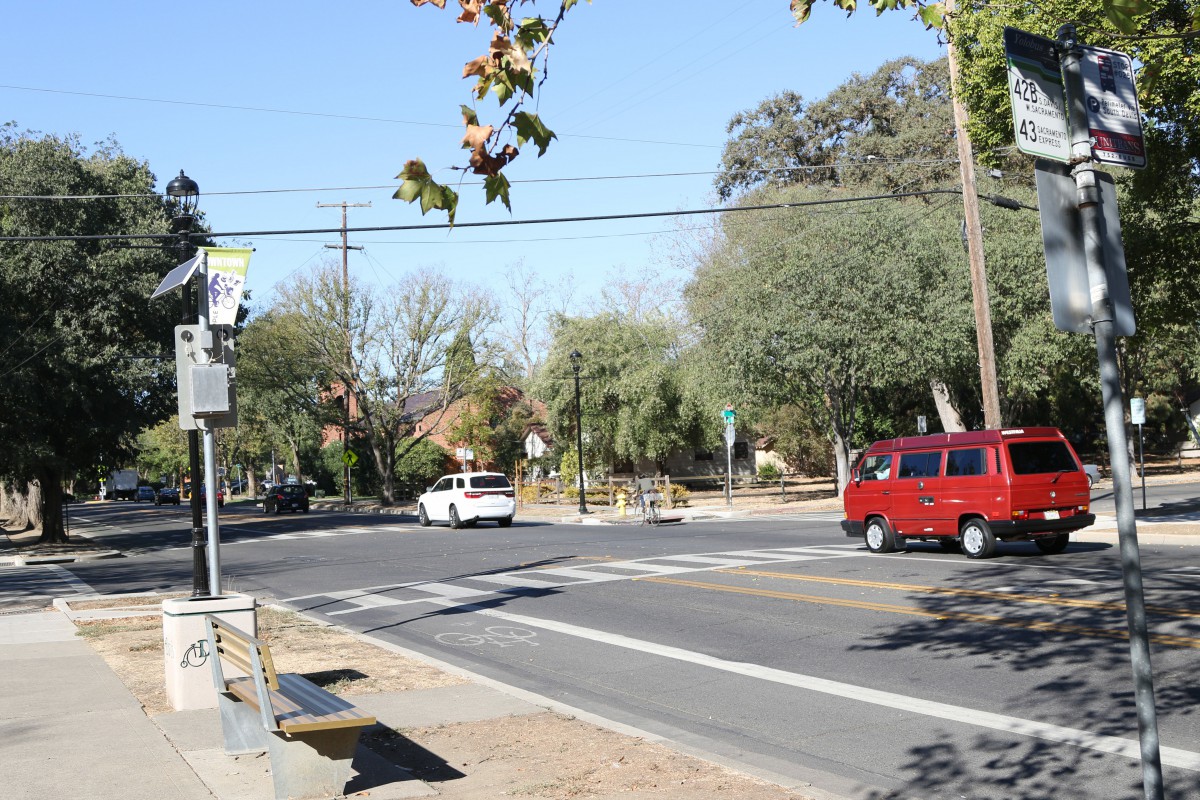 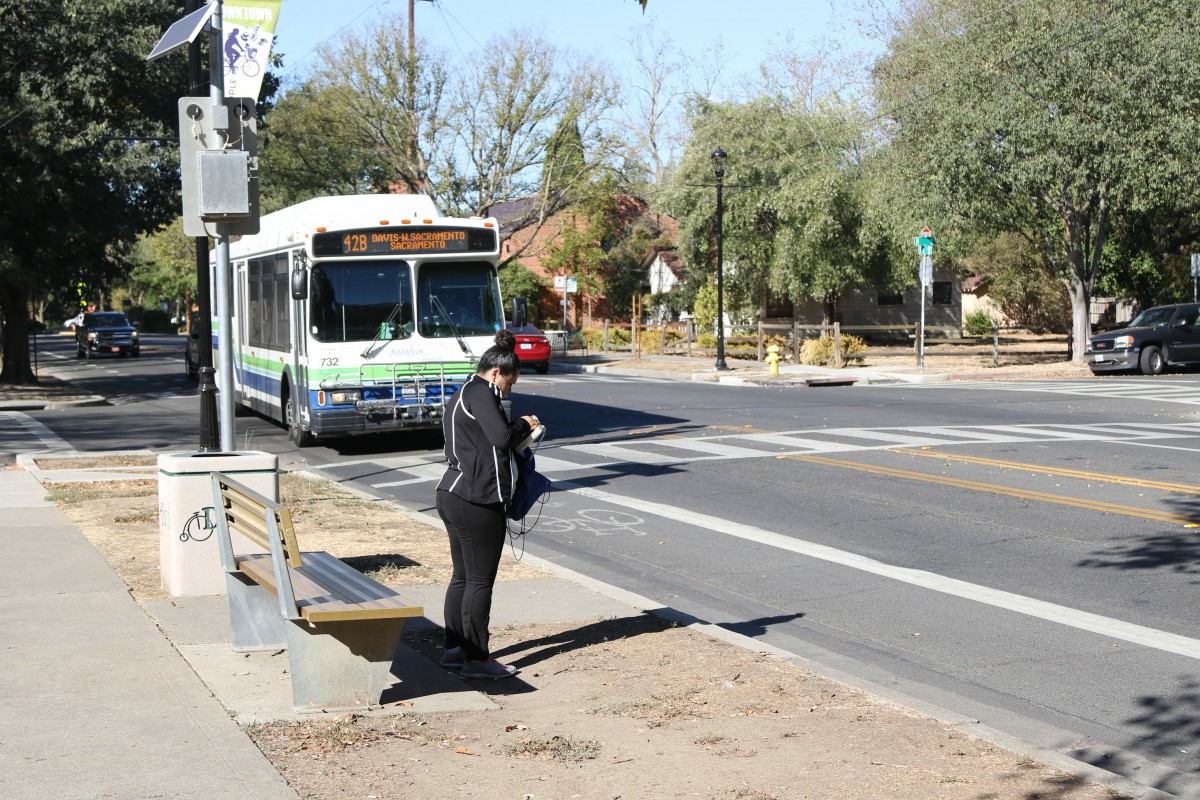 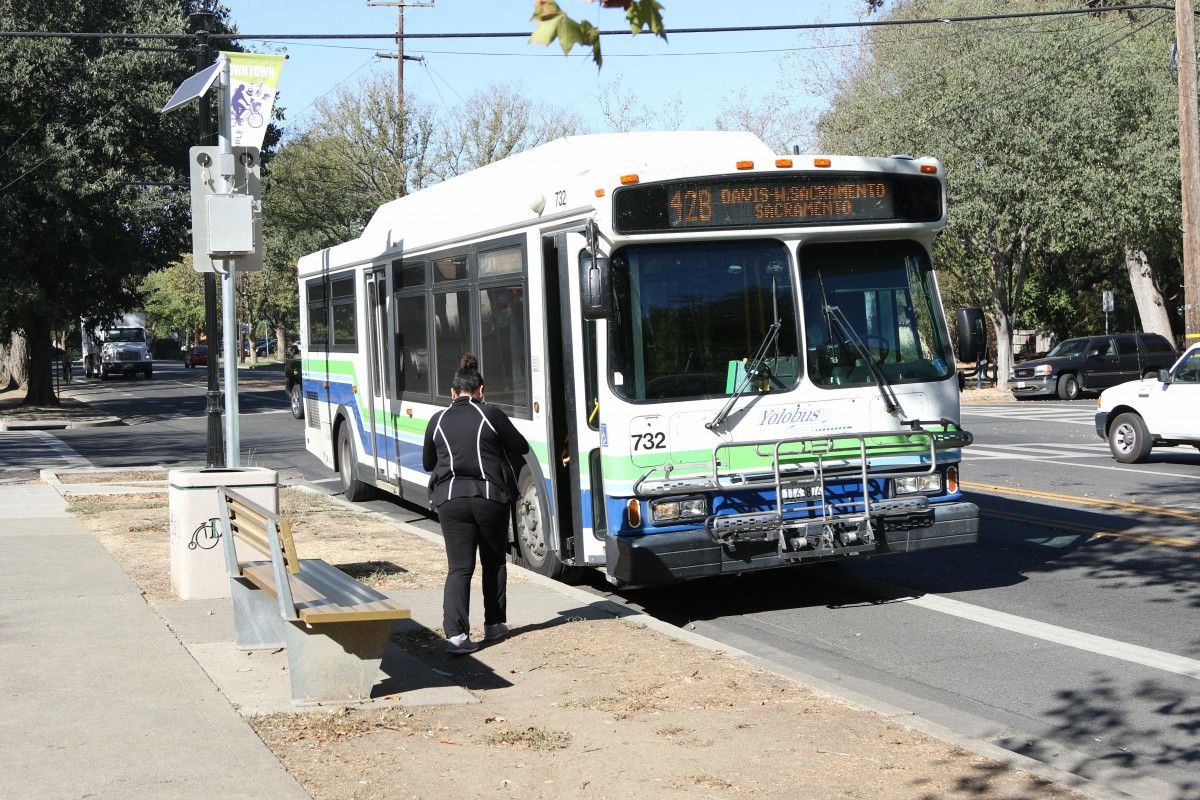 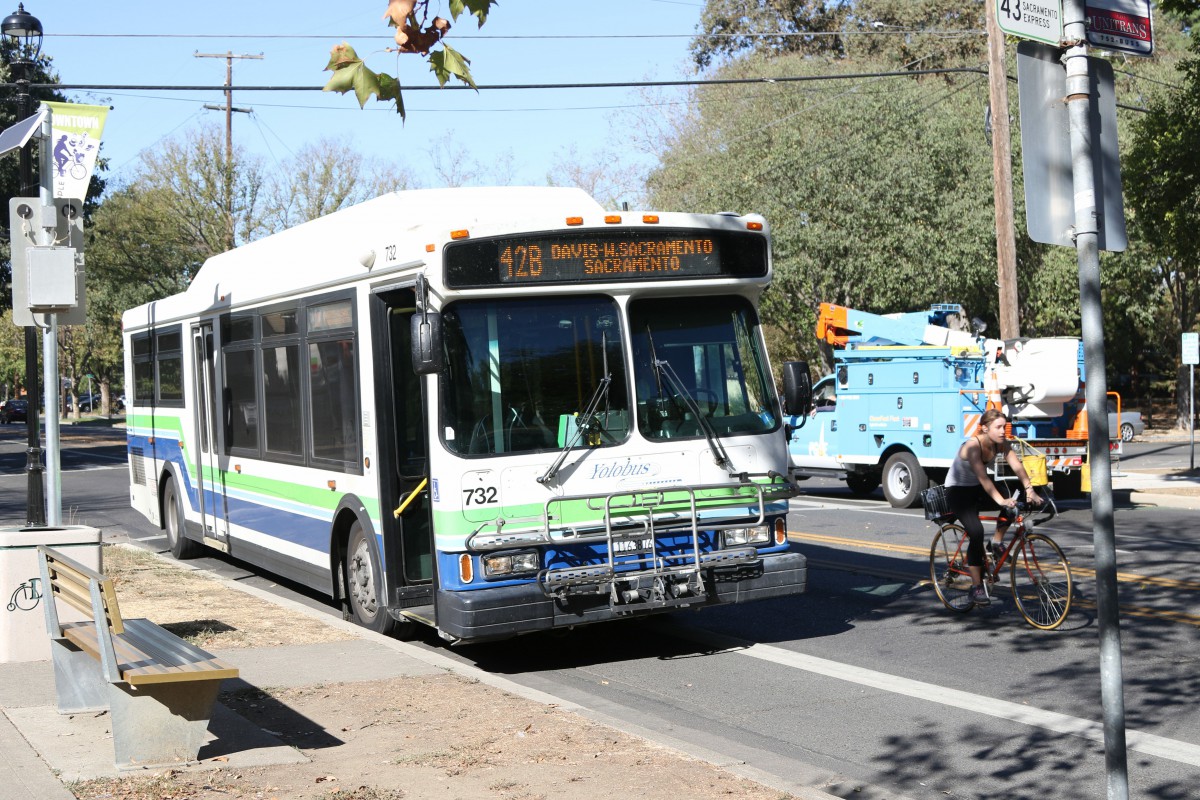 We spent some time here at the corner of 5th and D Streets. Mr. Palmere talked about the advantages of the new design for 5th. Previously, buses had to stop in the traffic lane and force cars to go around. Right now there is enough room for even large vehicles to go around the bus using the median, without going into the oncoming traffic lane. One of the tricky questions will be what happens when they go to the raised median phase of the project. 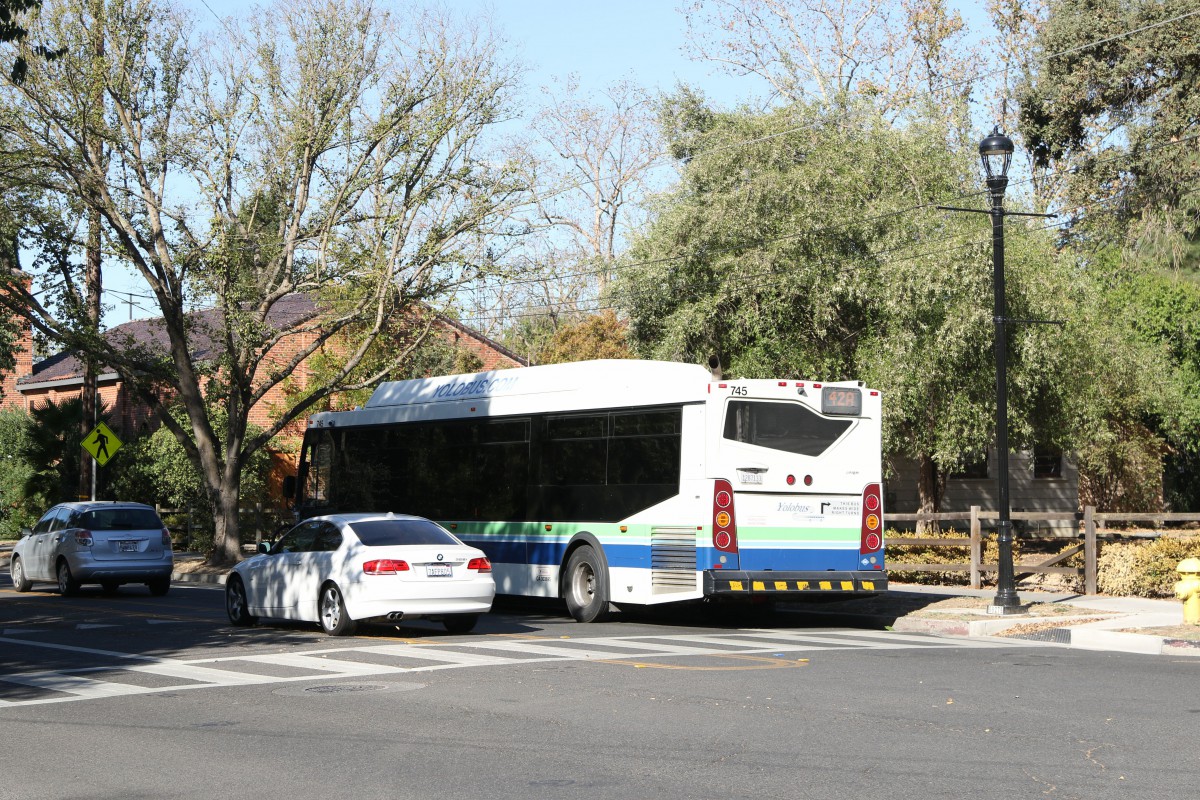 Here you can see the Yolo Bus parked on the side of the street. You have one car about to pass on the left while another car makes a left turn onto 5th Street. Both are able to easily pass the bus on the left. 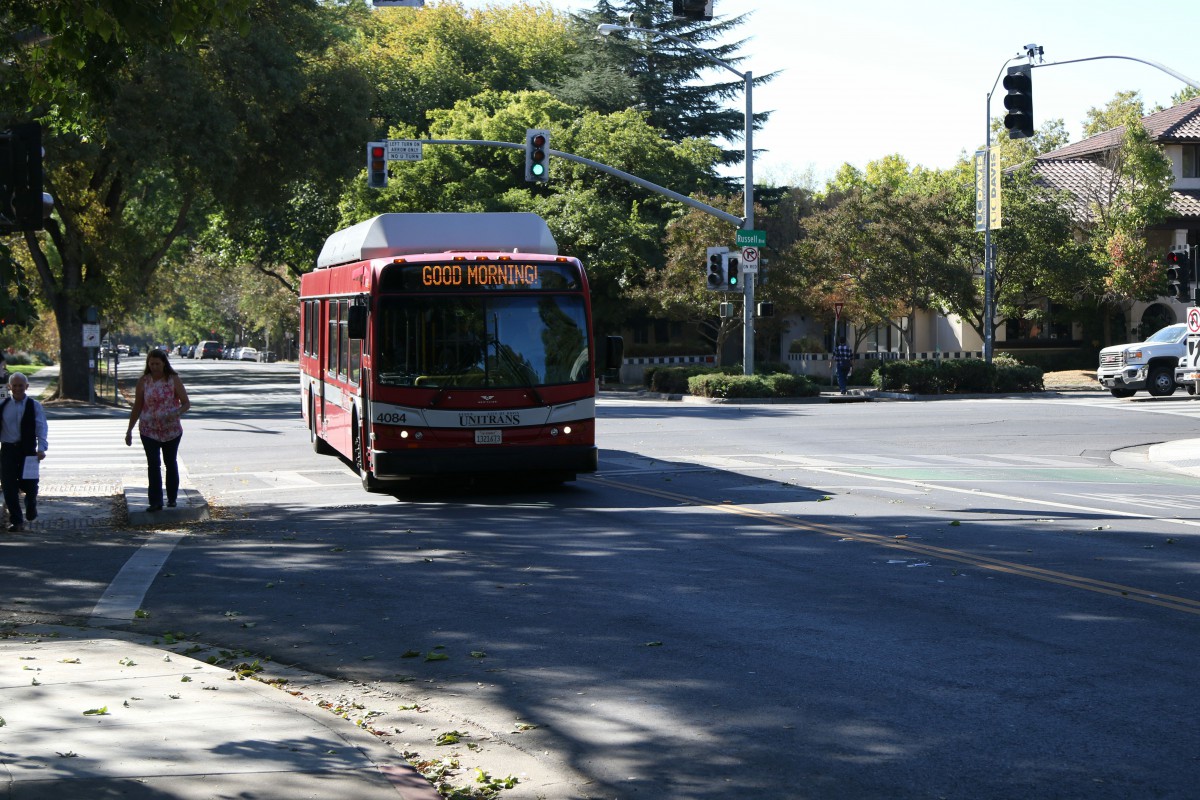 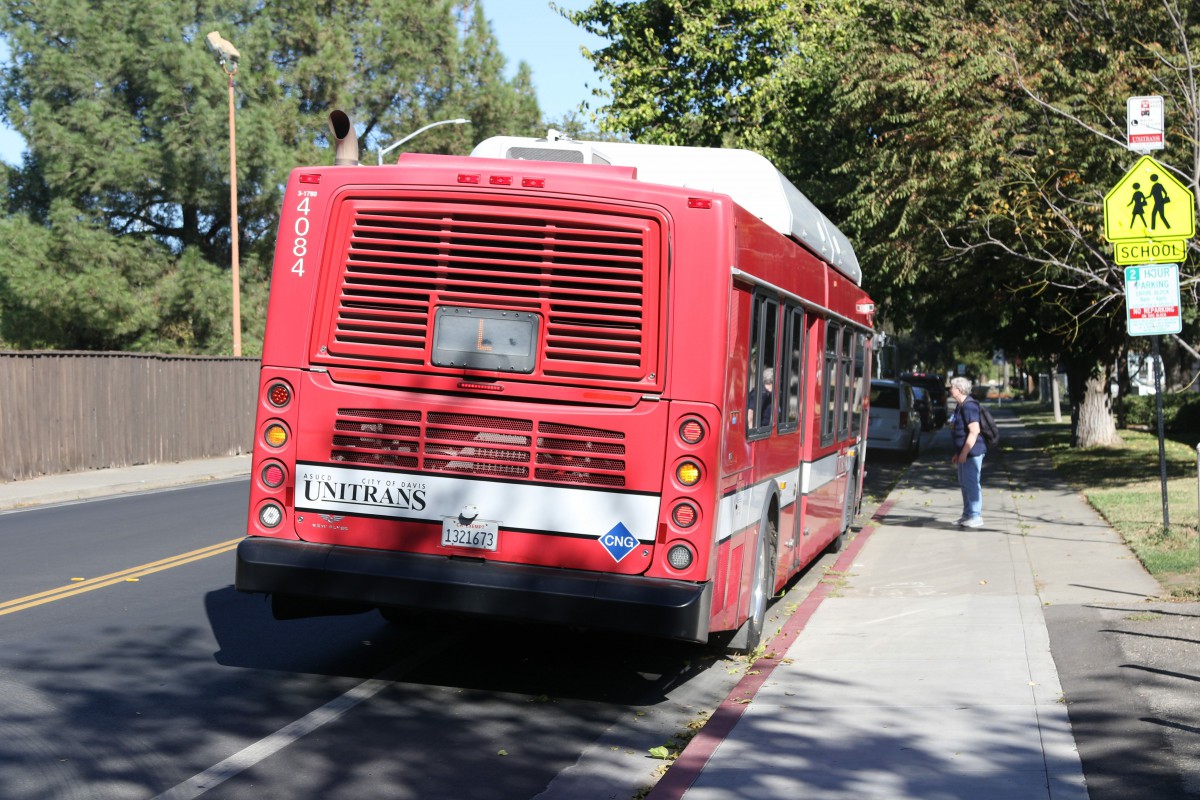 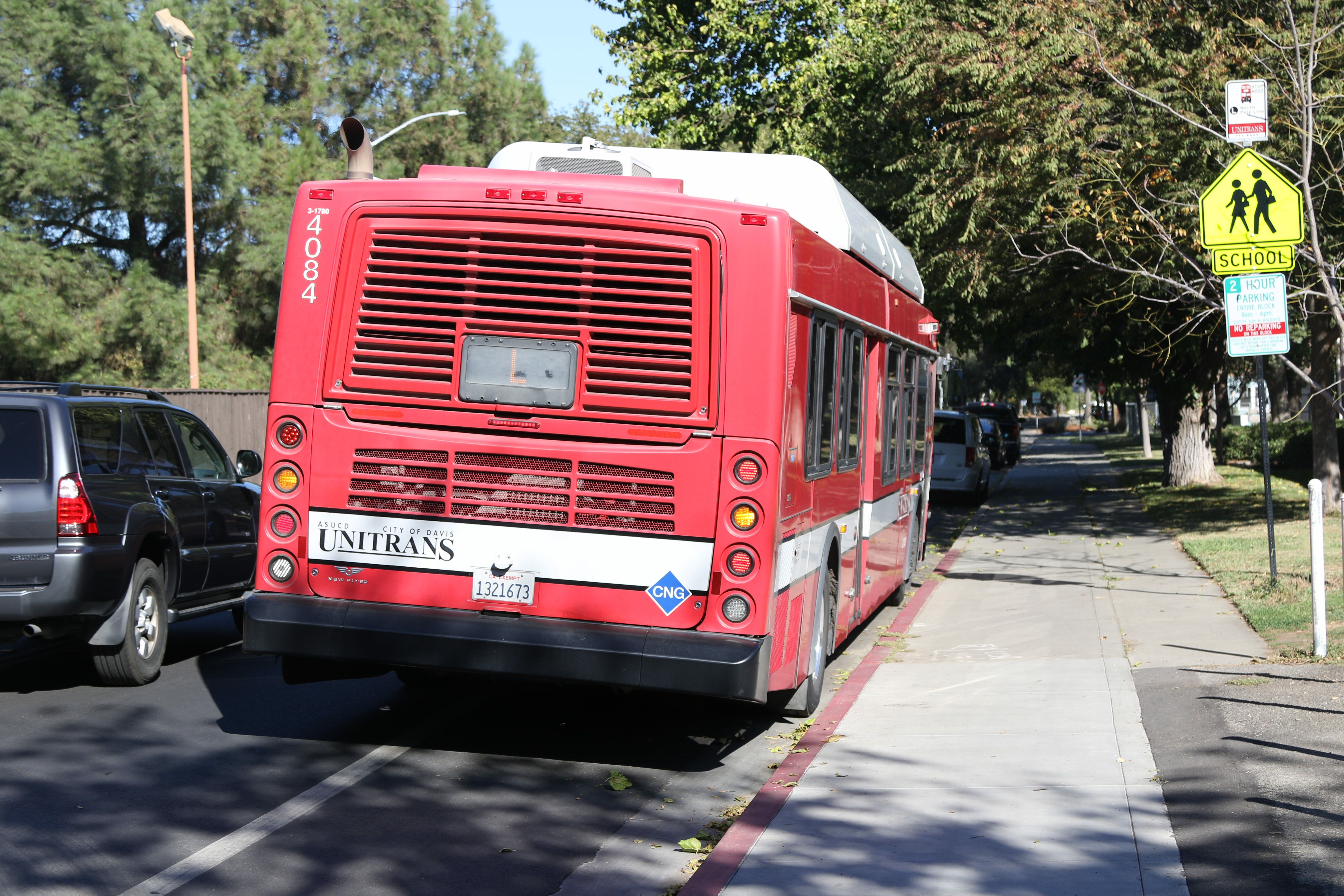 Here you can see an Unitrans Bus going through the intersection of Russell and B St. The bike lane here is not wide enough to accommodate the bus. But an SUV is able to pass, moving slightly into the oncoming traffic lane.

14 thoughts on “Why Would a Bus Stop Cause the Bus to Block an Intersection?”