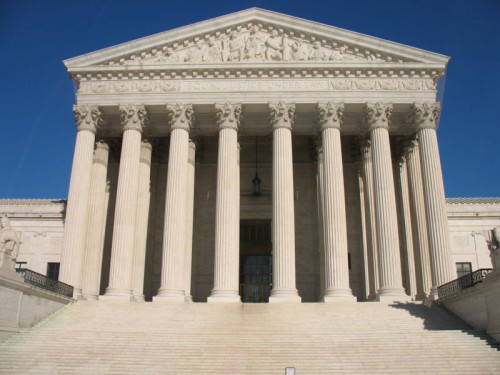 The US Supreme Court will hear a case on Monday on whether a man sitting on death row had his rights violated when the prosecution struck all four black prospective jurors and then argued for a death sentence, to “deter other people out there in the projects.”

Timothy Tyrone Foster is a black defendant who was charged with killing an elderly white woman, Queen Madge White. During the trial and during the appeal, Georgia’s courts denied Foster’s claim of race discrimination under Batson v. Kentucky, 476 U.S. 79 (1986).

However, during habeas corpus proceedings, Mr. Foster “obtained the prosecution’s notes from jury selection, which were previously withheld.” According to the brief, “The notes reveal that the prosecution (1) marked the names of the black prospective jurors with a “B” and highlighted them in green on four copies of the venire, the list from which jurors may be selected; (2) circled the word “BLACK” next to the “Race” question on five juror questionnaires; (3) identified three black prospective jurors as “B#1,” “B#2,” and “B#3”; (4) ranked the black prospective jurors against each other in case “it comes down to having to pick one of the black jurors”; and (5) gave explanations for its strikes that were contradicted by its notes.”

Despite this, the Georgia courts again declined to find a Batson violation. The question before the Supreme Court is, “Did the Georgia courts err in failing to recognize race discrimination under Batson in the extraordinary circumstances of this death penalty case?”

In an op-ed in the New York Times today, former Deputy U.S. Attorney General Larry Thompson (2001 to 2003), argues that this case “challenges the all-too-common practice by which prosecutors deliberately exclude African-Americans from criminal juries.”

In the Batson case, he notes, the Supreme Court attempted to allow the practice through its ruling. The 7-2 decision in 1986, written by Justice Lewis Powell, overruled the previous standard in Swain v. Alabama where the court had recognized that a “State’s purposeful or deliberate denial to Negroes on account of race of participation as jurors in the administration of justice violates the Equal Protection Clause,” but left it to the defendant to prove a systematic striking of black jurors (a standard that the Foster case would seem to have met anyway).

However, “Once the defendant makes a prima facie showing, the burden shifts to the State to come forward with a neutral explanation for challenging black jurors.”

Justice Thurgood Marshall, in concurring with the majority, noted, “The decision today will not end the racial discrimination that peremptories inject into the jury-selection process. That goal can be accomplished only by eliminating peremptory challenges entirely.”

Mr. Thompson, in his op-ed, argues that “prosecutors routinely ignore that decision, excluding black jurors because of marital status, manner of dress, last names and other allegedly ‘race neutral’ reasons.”

He argues, “This is problematic because interracial juries make fewer factual errors, deliberate longer and consider a wider variety of perspectives than all-white juries, according to several studies.”

Mr. Thompson, for example, notes that “from 2005 to 2009, prosecutors in Houston County, Ala., struck 80 percent of qualified black jurors from death penalty cases. Consequently, in a county that’s 27 percent black, half of death penalty juries were all-white. The other half had one black citizen each.”

In another study of death penalty trials in North Carolina, cases from 1990 to 2010 were analyzed and the study found that “prosecutors excluded black jurors over twice as often as nonblack jurors.”

Mr. Thompson adds, “An analysis of over 300 felony jury trials in Caddo Parish, La., from 2003 to 2012 found that of 8,318 qualified jurors, nearly half of black jurors were struck, compared with only 15 percent of nonblack jurors.”

In the Foster matter, while “the prosecution has never admitted that race played a role in selecting a jury for Mr. Foster’s trial, some of its ‘race-neutral’ reasons for strikes were inaccurate and inconsistent. For example, prosecutors struck a black juror for being a social worker — but she was a teacher’s aide. Meanwhile, prosecutors accepted every white teacher and teacher’s aide in the jury pool.”

He continued, “When the prosecutors asked a white juror and a black juror whether the defendant’s age, which was close to that of their children, would be a factor in the sentence, the black juror said ‘none whatsoever’ but was struck based on his son’s age. The white juror answered ‘probably so’ and was accepted.”

Mr. Thompson wrote that he along with other prosecutors have joined a friend-of-the-court brief in support of Mr. Foster.

He writes, “We recognize, and refuse to condone, the blatant unconstitutionality of the prosecutorial misconduct in this case. Moreover, my own experience suggests that discrimination in jury selection is indeed a national problem, despite over a century of attempted legislative and judicial remedies.”

He references a 1995 workshop by North Carolina’s district attorneys, where the attendees were given a handout entitled “Batson Justifications: Articulating Juror Negatives.”

He writes, “It listed acceptable reasons for striking potential jurors, like body language, attitude and other factors, that the prosecution could present in the face of a Batson challenge. These vague explanations are virtually impossible for future courts to interpret as race-based, although they often are.”

Mr. Foster’s case is, of course, more egregious and, as Mr. Thompson puts it, it “offers a rare instance of extraordinary and well-documented misconduct.” He writes, “The prosecution’s notes show purposeful racial discrimination in jury strikes. A judicial system that allows for obviously discriminatory jury selection is intolerable. If the court cannot establish discrimination in this case, then the lofty language of Batson rings hollow.”

3 thoughts on “Will the Supreme Court Continue to Allow Race-Based Jury Exclusions?”