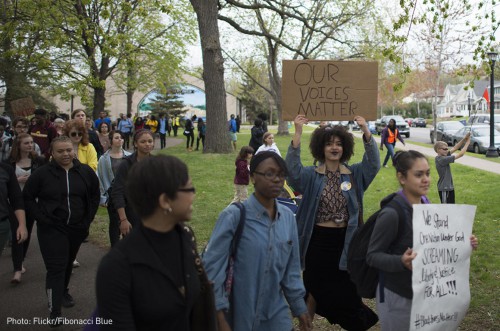 One of the more balanced accounts of the campus protest controversy comes from Cornell Law Professor Michael Dorf published November 18 in Verdict. Professor Dorf notes that recent protests against administrators at Yale, the University of Missouri and other places “have already sparked a backlash.”

Critics who have “long regarded college campuses as bastions of liberal political correctness see the protesters as shouting down anyone who disagrees with their views, self-segregating, and making symbolic lightning rods of administrators at the cost of their jobs and reputations.”

Professor Dorf is critical of what he calls “the unfortunate conduct of some of the students” and “the controversies that immediately provoked the protests,” and argues “there does appear to be some truth to the claims of the critics.”

As a constitutional law professor, he writes, “I feel a special responsibility to defend free speech, due process, and integrated spaces.” He added, “Moreover, seen in isolation, an email about Halloween costumes (at Yale) or the submission of racial incidents to a slow-moving bureaucratic process (at Missouri) does not necessarily constitute grounds for demanding the resignation of administrators.”

However, as we have argued recently, “the flash points for student protest are just that.” And the “real complaints go much deeper.” The professor writes that the students “object to a campus culture that repeatedly challenges their sense of belonging—occasionally directly through the use of racist language and imagery but more often through subtle, perhaps even unconscious, signals from fellow students, faculty, and administrators. They want colleges to do more—much more—to make them feel welcome on campus.”

This is the root of the problem and why the use of the n-word in a class of nine whites and one black is problematic and why the language of the Claremont Dean who talked about working to serve those who “don’t fit our CMC mold,” strikes at the heart of that flash point.

Professor Dorf offers “a more hopeful-and fairer-reading of the protests.” He argues, “The latest campus protests do reflect a failure, but not the failure of diversity. Rather, they reflect the failure of campus administrators, faculty, and students to follow through on promoting diversity beyond the admissions process.”

What the minority students want is “a sense of belonging.” He cites a New York Times article about students at the University of Missouri, where it becomes clear that the problem is not just overt racism – which manifests itself from time to time. But it goes beyond that to “suspicious stares, patronizing and ignorant questions from white classmates, and the relative paucity of minority faculty (which) take a cumulative toll.”

He writes, “Does that mean that political correctness is not a problem on college campuses? Certainly not. But it is a profound mistake to treat a few incidents of irresponsible behavior as indicative of an entire movement.”

He writes, “For example, the person whom Friedersdorf identifies as the most aggressive ‘weaponizer’ of safe space—a white assistant professor of communications who called for ‘muscle’ to remove a student journalist attempting to record the protest—has resigned her courtesy appointment from the University of Missouri’s School of Journalism and apologized for her conduct. Both departments condemned her actions, and the student protesters themselves issued a statement endorsing the First Amendment rights of journalists to cover their protests.”

More broadly, “the student protests are an outgrowth of the civil rights movement, which was central to the development of both racial equality law and modern free speech law. Any attempt to associate civil rights demonstrators in the U.S. with political correctness, censorship, or segregation must rely on a highly selective and unfair sample of events.”

He writes, “Likewise, whatever one might make of Justice Scalia’s invitation to litigation against particular university programs that permit the formation of minority enclaves, the motivation behind many such programs must be understood in larger context.”

He continues, “When universities provide spaces where minority students can spend some—not all—of their time avoiding being stereotyped and just relaxing, they can ultimately facilitate the broader mission of integration.”

Professor Dorf proceeds to note progress, writing, “Over the last generation, we as a nation have made considerable progress in addressing the stains of three centuries of slavery and a century of Jim Crow, but it would be naïve, willfully blind, or just plain dishonest to claim that we live in a color-blind society. Progress towards racial equality must be made on many fronts, including at universities.”

At the same time, he argues, “It is no accident that it is the University of Missouri where the most dramatic protests have occurred. Many of the activists on campus are veterans of the Black Lives Matter campaign, which first emerged in Ferguson, Missouri.”

Thus, he continues, “it would be a tragic mistake to regard the campus protests as a reason to abandon the goals that the Supreme Court endorsed in Grutter and, twenty-five years before that, in Bakke.”

“One of the lawyers for the University of California in Bakke was Berkeley law professor Paul Mishkin. He was no liberal, let alone a practitioner of political correctness. But he viewed “race relations [as] our most durable domestic crisis,” and he understood that race-based affirmative action in higher education has a critically important role to play in helping to heal this nation and chart a more promising future. The protests around the country should be regarded as a signal that, as far as we have come on race since the late 1970s, when Bakke was decided, we still have a considerable way to go,” Professor Dorf concludes.

75 thoughts on “Analysis: Another View of Campus Protest and the Need for Safe Spaces”