Recently, in front of Mishka’s Cafe, Mayor Dan Wolk told the Sacramento Bee, “This is Davis and we’ve got a problem here… We can’t just move on like nothing happened here. We’ve got to see what’s going on and what we can do about it.”

But do we have a problem here? Clearly we had a couple of high profile incidents – the murder at KetMoRee and the rape – that took place at Community Park, but the encounter began at Bistro 33.

Last month, Assistant Police Chief Darren Pytel gave the Bee a similar comment to what he had previously given the Vanguard, saying, “We haven’t seen a significant increase in the number of calls, but we’re seeing changes in the types of calls… We’re seeing more violence, fights and weapons cases – knives, pipes, display of firearms.”

The mayor has been pretty consistent in his belief that Davis’ downtown has changed after 10 pm and he doesn’t believe we should be approving more nightclubs. He told the Bee last month, “We shouldn’t be approving another nightclub without having this community conversation… I have to be honest: I don’t think we should have more of these nightclubs downtown. If we’re going to have nightclubs, it can’t be the status quo. You’ve got to have more security. You’ve got to have more limits.”

If we are going to make changes, however, it should be based on some hard data, rather than speculation.

The Bee, for example, juxtaposes the drop in violent crime citywide from 265 in 2004 to 84 in 2014 against the rise in attacks downtown, which they say “coincides with nightclubs opening in the G Street area, including late-night club scenes at KetMoRee, Tres Hermanas and G Street Wunderbar.”

The Vanguard has requested some preliminary crime data from the Davis Police. It is not perfect; right now the police are only able to provide crime by beat. Beat 2 includes the downtown, but at least it will give us a sense what of has been going on. Obviously, 2015 still has about 18 percent of the year to go, but at least we can see the trend since 2010. 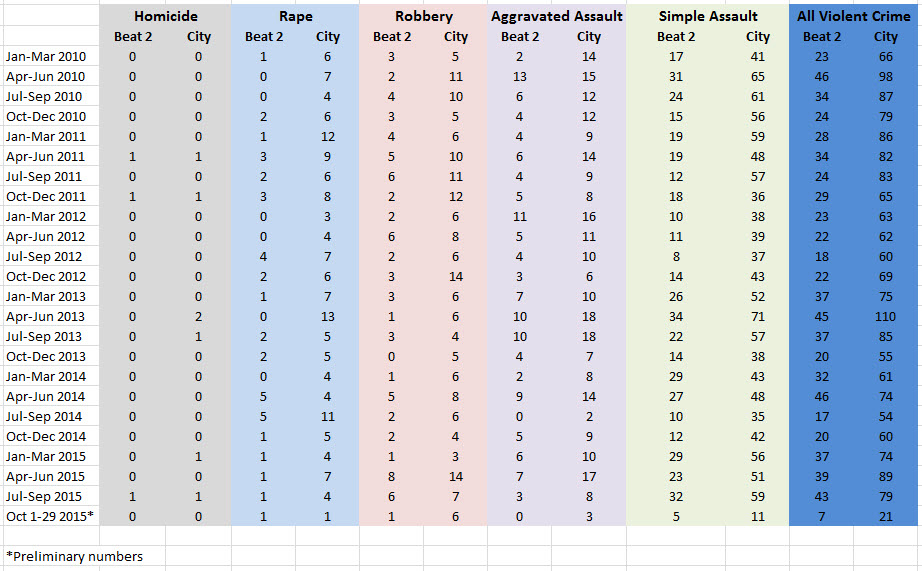 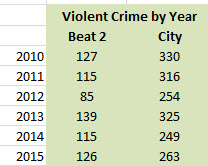 This chart shows crime violent crime broken down into five categories from homicide to rape down to simple assault, by quarter, and those numbers are then further broken down to the city as a whole and Beat 2, which includes the downtown.

When we compress the data into all violent crime and by year, we can see that the city has been fairly stable over that period, perhaps with a downward tick, other than 2013. The downtown has remained about the same. 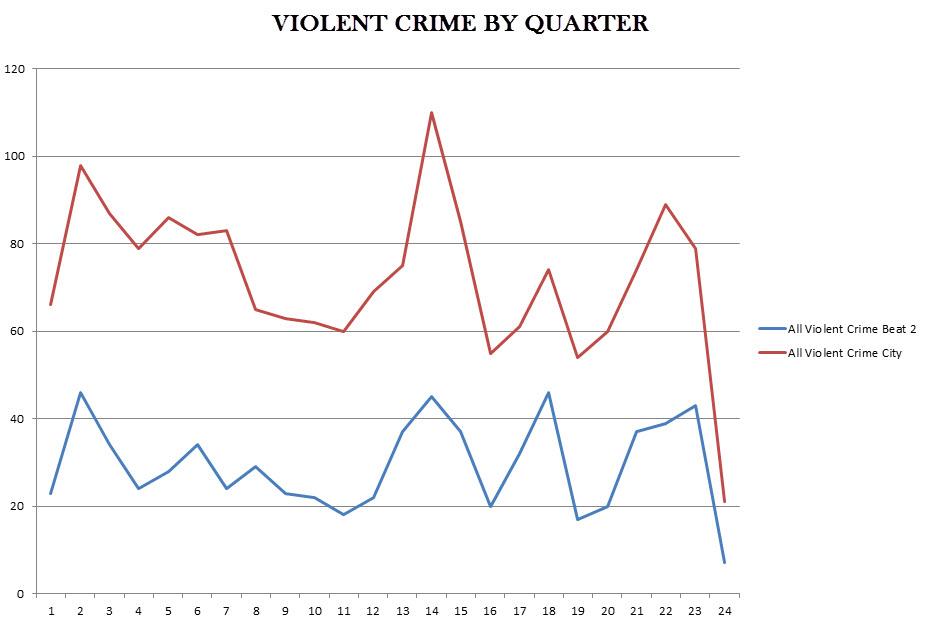 When we graph the two lines by quarter, we see some wild fluctuations but the overall trend is the city violent crime appears to be going downward while it remains fairly stable in the downtown. 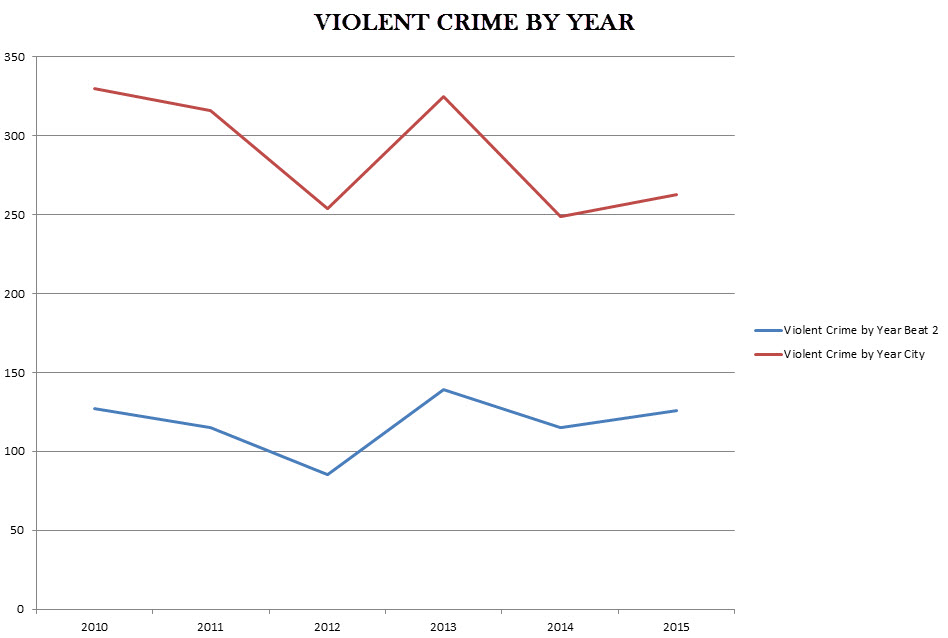 We see that more clearly in violent crime by year – maybe a slight uptick in the downtown and a small downtick citywide. Clearly, 2015 will have a small uptick in crime from last year, both citywide and in the downtown. 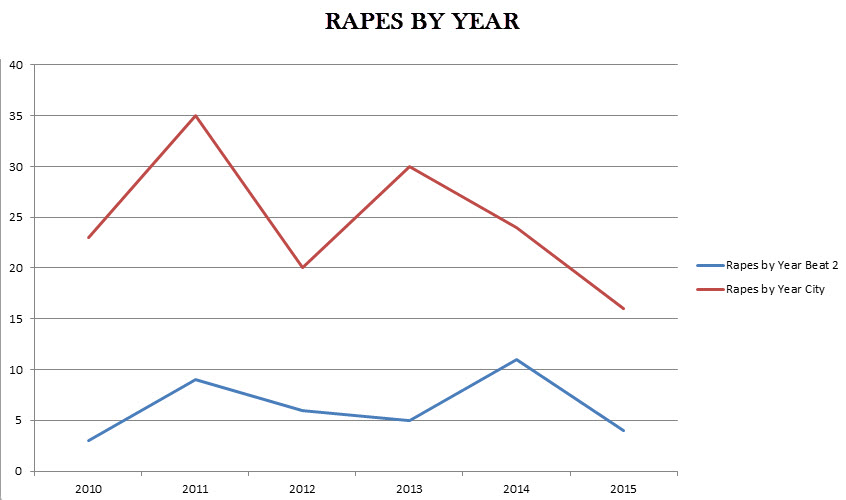 Based on the conversation at council on Tuesday, we charted out the rapes by year. I agree with those who argue that rapes are likely underreported, however, underreporting has been fairly stable over time and, that being the case, I see no real evidence of an uptick in sexual assaults in the city.

Again, back in September, Darren Pytel noted that the calls for service have not suddenly doubled or tripled downtown, it’s always been busy. However, the nature of these incidents have escalated somewhat in the last few years.

Darren Pytel added, “We are still with a lot of problems there.” He said at KetMoRee and other locations that they are seeing more and more weapons. “We’ve taken more guns and knives off of people arrested in fights downtown,” he said. “We have kind of seen a change regarding escalation in weapons and violence over the past couple of years.”

But the statistics that we see really don’t appear to bear this out.

The conditions that the city placed on Blondies seem reasonable – adding more officers to the downtown patrol, improving security, and wanding people all seem like reasonable precautions. However, the community seems to be reacting more to a few high profile incidents than any real increase in crime – at least from what is reflected in the last six years.

43 thoughts on “Analysis: Do We Have a Problem with Crime Downtown?”