On Wednesday evening, the City of Davis held a discussion on the late night downtown scene. Whereas a month ago the Vanguard and CivEnergy held a more traditional panel discussion, this was a facilitated discussion by Judith MacBrine, who explained to the Vanguard this was intended as the first discussion to simply get people talking.

“The way (the discussion) was designed was to have people start talking to each other and avoid being positional. For me, one of the best takeaways was that people started to talk and listen to other perspectives than the ones they’re used to,” said Ms. MacBrine, a professional facilitator who has worked extensively with the city in recent years.

She’s hopeful that this will help us address the community’s needs rather the needs of one person.

Part of that consideration, she said, is we need to be “engaging this whole issue, so that we really understand how it is that young people are using the bars and respond to that.”

For Ms. MacBrine, she saw this as “the first community conversation.” The bar and restaurant owners have engaged in a series of conversations, but we need to look more into the student population and those who actually utilize the bar scene.

The city overall was pleased with the turnout and the discussion.

Councilmember Lucas Frerichs participated in the entire process. He came away impressed that more than 80 people would “come out on a busy weeknight to participate in a community conversation regarding the health and future of our downtown.”

“From the attendance at tonight’s event, I think it’s crystal clear that the citizens of Davis are quite concerned about the late night party scene, among other issues,” Councilmember Frerichs told the Vanguard.

He added, “It was an interactive and thought-provoking evening, and I think it will assist the City Council as we continue to develop and implement comprehensive solutions to address the late night environment in our downtown. “

Likewise, Darren Pytel, the Assistant Police Chief who has taken a lead role in these discussions, felt the turnout “was actually very good.” But, like Judith MacBrine, he was concerned about the lack of student participation.

“I liked the mix – bar owners, property owner, residents – made for much better dialogue,” he said. “The dialogue at the very end regarding community limits v. business discretion turned out very interesting. I think bar owners and community members were really able to share their thoughts in a meaningful way.”

He added, “I also think it helped people understand the others’ point of view. I think a lot of people moved more towards the middle after some dialogue.”

From the police perspective, “The second exercise was the most helpful for us. It provided useful direction as we start writing an actual ordinance. It also became evident there is not really consensus amongst the community or amongst the bar owners on the terms of an ordinance -that was interesting.“

Assistant Chief Pytel added, “But, I believe there was actually consensus with nearly everyone that some regulation is probably a really good idea. Most of the conditions on Blondies that were discussed seemed like no-brainers for everyone.”

Assistant City Manager Kelly Stachowicz likewise noted that they were glad to have so many people involved in the discussion. She said, “Staff is pleased that we had over 80 community members, business representatives, city staff and police officers, and others in attendance to begin to think critically about what we want for our downtown.”

One of the surprises was, despite the heavy tilt in the composition of the audience in terms of age, the feedback was fairly balanced.

Ms. Stachowicz explained, “The input from participants was thoughtful and varied, with mixed responses about appropriate closing times and other operational issues for bars, specifically whether bars should be required to maintain seating for customers (as they do when they are in “restaurant” mode) and whether common sources of alcohol (ie pitchers) should be available at all times for purchase.”

She added, “There was not clear consensus among those in attendance how the City should proceed, with responses distributed relatively evenly along the spectrum of placing community limits and allowing for individual business discretion.”

Others who attended the meeting had expressed concern about the large number of people in the over-50 demographic. However, despite the age and demographics of the audience, they apparently had a widely and evenly disbursed set of responses about whether the businesses or the community should be setting the limits for the bar/club venues.

Nor was there an overwhelming consensus or push for earlier closings.

That is not to say those voices weren’t in the room. Former City Councilmember Michael Harrington has consistently pushed for a midnight bar closing, as he did on Tuesday during public comment at the Davis City Council meeting.

Mr. Harrington told the Vanguard, “I learned a lot, and the information greatly helps me to reach some conclusions on how our wonderful downtown can be made safer for residents, businesses, and visitors.” 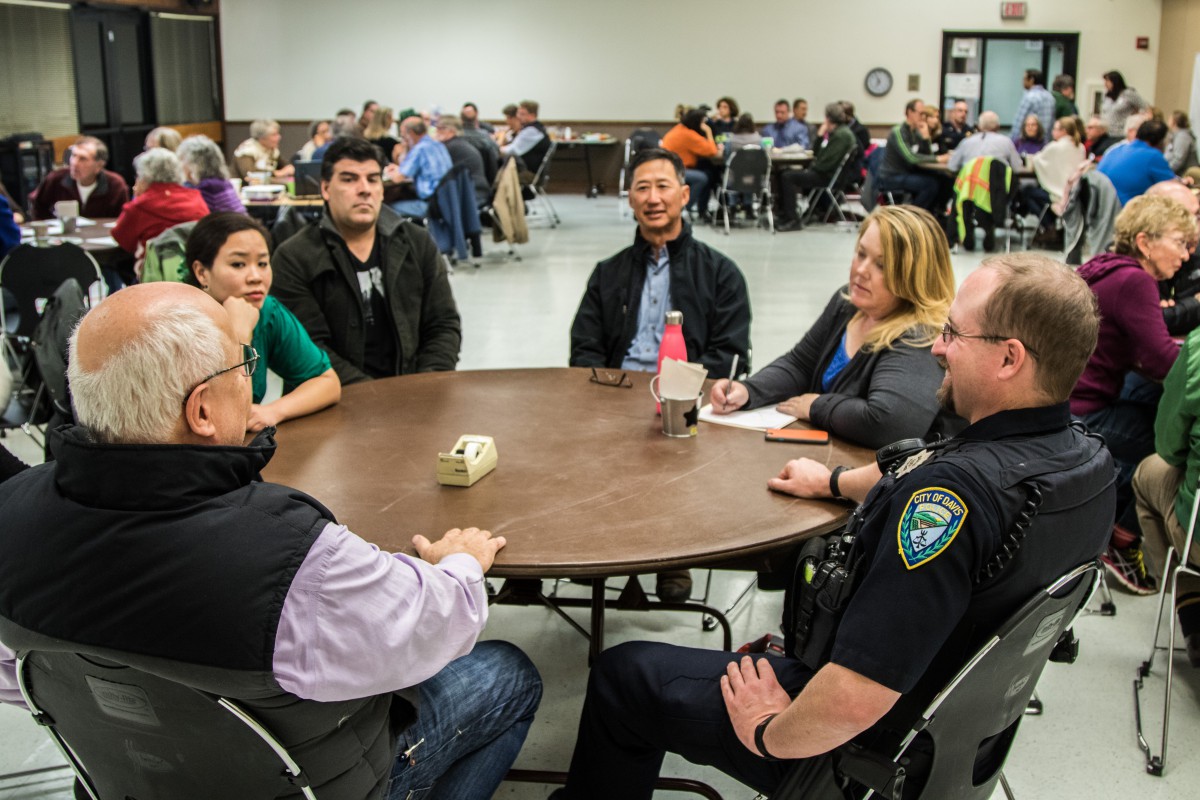 For him, public safety has to be the first priority. He said, “I don’t know how it came to be that the City started allowing businesses to morph from nice family restaurants to jam-packed disco halls after 10 pm.” He would add, “I personally believe, even more so today, that the City should adopt a strict prohibition against selling alcohol after midnight.”

But others were more nuanced. Heidy Kellison really liked the process and came away with an appreciation for the position of bar owners.

She was impressed with the amount of listening that took place in contrast to the usual perception of Davis politics as “a contact sport.” She said, “Last night was really in my opinion, Davis at its best because people were thoughtful and seemingly grappling with varying view points and all wanting what’s best for our community, not necessarily wedded to any particular solution.”

The thing she learned most “is that Davis really can come together in a respectful process over something that is very serious and has had tragic consequences.”

Ms. Kellison was pleased that Judith MacBrine had dispersed the bar owners and restaurant managers, who had originally gathered at one table, and had them spread out across the room.

Ms. Kellison explained “that really opened my heart,” as the manager at KetMoRee ended up sitting at her table and that “softened my heart a lot because this isn’t what he wanted and he’s obviously dealing with horrible consequences.”

Her overall view, she said, changed a little. “I certainly don’t want good actors or people who are willing to modify their business practices to be consistent with community values to go out of business,” she said. “My viewpoint has not changed at all about businesses coming to town that have business plans elsewhere that objectify women and open a potential for an atmosphere that encourages people to act unlawfully.”

Alan Hirsch, who attended the forum, had some thoughts as well. He said, “These groups are extremely useful for people to hear and understand both side of the issue and develop empathy and understanding.” However, he was “disappointed we did not hear more from police, hear more ‘facts’ until the end.”

He wanted to hear more about police experiences with the problem and hear more from bar owners on how these problems could be resolved.

A good portion of the discussion involved people sharing both positive and negative anecdotal experiences. For Mr. Hirsch, “I have concern that any statistics or patterns are not very meaningful as those present in the room were not representative of city as a whole, shopper or even key stake holder groups in this issue—e.g. bar customer and downtown businesses and land owners.”

He said, “The focus was on helping the BAR owners and their landlords: ‘how do we make our Downtown into a more workable Entertainment District work.’   Isn’t the fact BARS are driving rent up and [driving] out retailers a problem?” He added, “Making bars run more efficiency and with less of a problem just hides the larger issue.”

The City is clearly looking for more engagement from students. Assistant Chief Darren Pytel told the Vanguard that UC Davis will help set up a meeting on campus to help bring more student involvement into the conversation.

As for the city, they will be looking at the data that came out of this conversation closely. Kelly Stachowicz told the Vanguard, “City staff will be using the information gathered at this event, along with other information and data, as we bring forward potential solutions to the City Council after the first of the year.”

The police will do that, as well. Darren Pytel said, “We will be taking a look at all the comments that were turned in and taking a look at the charts we did to see where we had the most commonality and where the system could be nudged to hopefully be better.”

For others, not enough was learned. For Alan Hirsch, for instance, there was “FAR FAR too narrow a focus when searching for solution. Council needs to take a larger perspective as they address this problem.”

Meanwhile, Heidy Kellison would add, “I think we need a regional message that Davis isn’t a place where people can come and act out and perpetrate crimes on our citizens.”

The city has promised to release their findings of this discussion in an open and transparent way to the community.