As many of my longer-term readers know, the Vanguard was founded in 2006 largely as a result of the community turmoil over the police, the actions and eventually resignation of then-Chief Jim Hyde, followed by the dismantling of the Davis Human Relations Commission.

Few understood at the time the extent to which Chief Hyde had divided his own department and turned many of the officers against himself. One reading of history from 2005 to his departure in June 2006 was that Chief Hyde used the community strife as a means to focus his department’s attention on an external adversary rather than on himself.

In 2006, numerous records requests and access to emails showed how Jim Hyde helped to foment this polarization over the issue of civilian review.

It has always been my position that Chief Landy Black’s hire in 2007, coupled with the hire of Bob Aaronson in late 2006, helped to move the department onto better footing. While I might not have always agreed with Chief Black, my view is that he helped to instill a professionalism and a no-nonsense approach to policing.

Earlier this week, there was a discussion centering around the problems that existed in 2006. For some, the key was that the Human Relations Commission was polarizing the community and was a cause of a great deal of this problem. I don’t believe the statistics bear that view out.

In the spring of 2006, the issue of the arresting of 16-year-old Halema Buzayan came to light. There were several problematic aspects to this arrest. There had been a minor traffic accident in a parking lot, the family had not believed there was contact, but they agreed to pay for any damage to the vehicle.

Long after they had paid that damage and thought the incident was behind them, a Davis police officer investigating the case concluded that an accident had occurred, that the family’s 16-year-old daughter was driving at the time, that the family was lying about the accident and about who drove  – and for reasons that still are not clear, he decided to arrest the girl for a misdemeanor at 10 pm on a school night in her night clothes.

To compound that lack of good judgment, audio-recordings suggest that he ignored her request for an attorney and later the Professional Standards Officer used the citizen complaint process to threaten the girl into confessing to having committed the crime.

The 2005 arrest of Halema Buzayan was one of a string of complaints against the police at that time, but because of the sensational nature of the case and the resources of the family, it quickly became the public face of the police-community strife.

The case had originally been referred to the Human Relations Commission by the City Council. The HRC, having heard from a number of complainants – some in incidents much more serious than this one – decided that they needed public accountability for the police and pushed for a civilian review board.

The police pushed back and, finally in June, after the election and before a new council was seated, the police chief left with an incendiary letter blaming his departure on the HRC and its chair, my wife. In mid-June, the Davis City Council voted 4-1 to disband the HRC.

In the meantime, the city hired Bob Aaronson, who, while not a civilian review board, was an experienced professional investigator who would review citizen complaints and advise the police department on them. Finally, in spring of 2007, the city hired a new police chief, Landy Black. 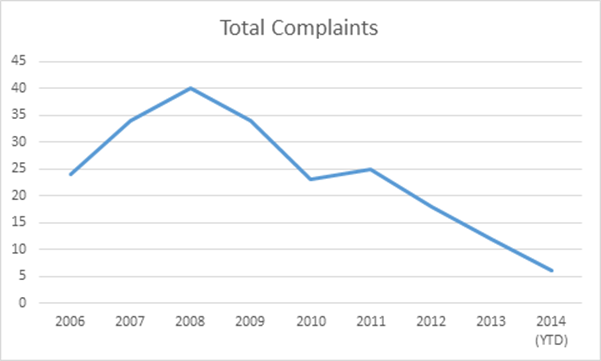 One of the debates has been the extent to which there were real problems in the police department or whether this was a trumped up controversy by a number of extreme activists.

The chart above was generated by the city last year when Bob Aaronson’s contract was up. It shows that 2006, which had just under 25 citizen complaints, was actually not the peak year. The peak year was 2008. Complaints then fell off precipitously (although the 2014 year was a bit misleading, as I think the change was generated mid-year).

There is a similar chart, I believe, from about 2009 or so, where the city showed the number of government claims and payoffs of lawsuits by year. There was a huge spike in 2005 and 2006 and those had fallen away over time, as well. I have not been able to find that chart and neither could the person at the city.

Both charts show about the same thing – there were problems in the police department that led to a series of allegations of police misconduct. But, as leadership improved, morale improved, and complaints have gone down.

One thing I have learned over time is that a department having few sustained complaints is not a good thing. Back in 2006, that factor was often cited by council as being dismissive of the problem. However, a sustained complaint generally requires the department to internally acknowledge a mistake and that takes a well-functioning department.

What has impressed me over the years has been the fact that the police department, under the leadership of Landy Black, is willing to sustain complaints – even when the complaints are simply that the officer was more rude than necessary.

Moreover, the department has been willing to get rid of problematic officers.

Three of the more problematic incidents involving the police in the last eight years have resulted in those officers involved being terminated or retiring.

For example, in 2008 a young police officer, Antoine Feher, was arrested outside of a night club in Sacramento for being intoxicated and belligerent. Officer Feher was asked to leave the premises numerous times by security guards and officers, but he refused. He remained belligerent and argumentative and was taken into custody for public intoxication. In his police report, Officer Hanks of the Sacramento Police Department described the incident.

He and Sgt. Lau observed Officer Feher “arguing and being belligerent with three security guards that work for the bar.” The security staff had asked Officer Feher to leave but he “refused to leave and stated that he wanted to talk to the police. We advised Feher that the security at the bar no longer wanted him there and that he had to leave.”

Officer Feher then purportedly told the police officers, “So this is how your (sic) are going to treat another cop.”

Officer Feher’s conduct extended beyond this incident and translated into numerous citizen complaints and ultimately he was dismissed.

Police Chief Landy Black, in a letter dated February 5, 2013, writes, “Based on the evidence, it became clear the conduct of the first arriving officer with whom you interacted did not meet the highest standards of conduct and service we expect from our members.”

“In particular, I determined your complain of improper conduct had merit; the officer used an aggressive tone throughout and did not meet our highest standards for interacting with the public,” Chief Black wrote.  “Therefore, that portion of the investigation was sustained, meaning that there is clear and convincing evidence that the officer engaged in conduct prohibited under our Department’s Rules and Regulations.”

The officer involved, Lee Benson, would be fired as a result of the incident. The Vanguard has since learned that Mr. Benson has been hired by other police departments and has had continuing problems with his conduct.

Finally, there was the incident involving Eli Davis in 2013 in which Mr. Davis was mowing his lawn when approached by a longtime Davis police officer who asked to see his identification. The police officer, who had been involved in a number of controversial incidents during his tenure, ultimately retired from the force.

The bottom line about the tenure of Chief Black is that, over time, Mr. Black would hire police officers who both understand the sensibilities of this community and reflect the professionalism instilled from the top.

The leadership in the police department is particularly strong, with a solid group of lieutenants who have helped to produce a much stronger organization than the one that existed in 2007 when Landy Black was hired.

Citizen complaints are down, the police department works well with the community and has been responsive when incidents have arisen from time to time.

5 thoughts on “Commentary: One View of the Legacy of Chief Landy Black”