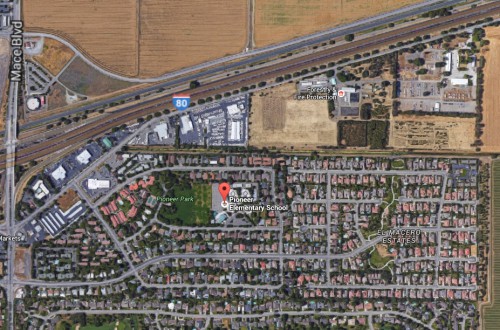 At 2:30 pm on Tuesday, the Davis School District put out a notice from Public Information Officer Maria Clayton: “Around 2pm today, there was a report of a suspicious person outside of Pioneer Elementary. The police department put the school in temporary lockdown for precautionary measures. Police were on the scene to investigate and within a short period, the lockdown was lifted, with no signs of suspicious activity. Student dismissal will occur as regularly scheduled.”

At the time, I was on my way to Sacramento, and, having seen the email, I alerted my wife since our sixth grader attends Pioneer, which is around the corner from where we live.

In our sixth grader’s version of the story, the guy had a gun and six police officers had to take him down on school property.

Naturally, we were a little concerned. However, Assistant Chief Darren Pytel assured me that there was no gun – and I obtained the police report.

What happened is that two second graders reported to a teacher that a dark-skinned male in a large charcoal gray truck made a “shooting motion with his hands” or “finger.” There was no weapon actually seen.

The vehicle was seen on Hamel Street near Pioneer Park. The principal placed the school on lockdown and an employee called the police. Officers arrived and checked the area and contacted the second grade students.

What actually happened is that, when officers contacted the person in question, he explained that he was a volunteer at the school and was holding up his name tag so that the students could see he was a not a stranger.

The lockdown was then lifted and there was no arrest made.

End of story, so it would seem. We have had a few of these lockdowns in recent months. The idea of erring on the side of caution in light of active shooter situations makes some sense.

Back in May, officers were called to Emerson Junior High School to investigate a report of a man wearing all black clothing, holding a gun in front of the campus.

The caller seemed to be distraught and ended the phone conversation with police dispatch before more details could be provided, police said in a news release.

During the search, officers determined the initial call was a prank. Two minors accused of making the false report were taken into custody.

In January, it was a bomb threat that forced the lockdown of North Davis Elementary school, in which a caller advised school officials that they had 30 minutes to evacuate the campus. The school was immediately evacuated, and everyone was moved to the Davis Art Center.

The first two incidents were pranks, the one yesterday was a misunderstanding.

There are a number of concerns here – one is that lockdowns, even if they are unlikely to result in a serious incident, are likely to take a huge emotional toll on the parents and students at the schools.

Second, at some point these incidents are prone to become like the little boy crying wolf, with the authorities and schools over time likely to ramp down their response.

Finally, we are relying on the perceptions of second graders here. Every so often, young children’s alertness helps to save lives but they are also likely to produce a lot of false alarms.

It may well be that this is the only safe way we can do things – go all out on every report in case it develops into something very real.

Share:
Tags:Darren PytelDavis PoliceLockdownPioneer Elementary
Previous : Upcoming Conflict Resolution and Mediation Certificate Training
Next : Do Authorities Have the Right Man in the West Sac Shooting of a 13-Year-Old Girl?

38 thoughts on “Commentary: Pioneer Locked Down After Misunderstanding”