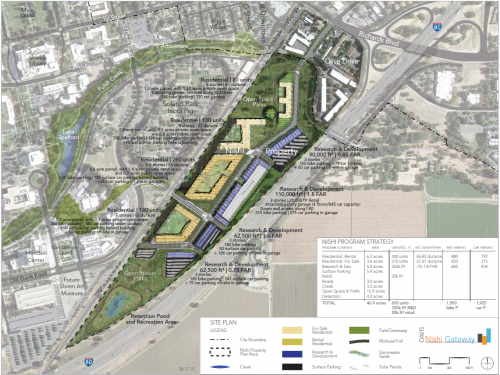 The Davis City Council in its strongest wording to date served notice to Nishi that without addressing the access issue, namely a second grade-separated crossing, it would not vote to put the project on the June ballot. That gives developers until February, less than three months, to solve the issue that has shadowed the project since its conceptual inception.

As Mayor Pro Tem Robb Davis put in no uncertain terms, “I will not vote to put this on the ballot in June without conditions related to access. The cleanest way is to say no undercrossing at the railroad – no project. No improvements to Richards – no project.”

However, like his colleagues, he said, “I’m willing to see what we can come up with in terms of this other way that may allow certain things to go forward in phased way, but no further. With the idea that the actual, that’s on the table in front of us cannot be developed without the second crossing.”

Mayor Pro Tem Davis put a motion on the table, seconded by Mayor Dan Wolk, to affirm a June ballot deadline for working to define the conditions to make it clear for the voters.

Councilmember Brett Lee said, “I’m a little bit uncomfortable with this notion that we’re supportive of the June ballot and asking staff to come back and address some concerns.” He said that staff could come back with the proposal that he is either supportive or not supportive of, depending on the specifics.

He said that, while he was in generally in favor of a June ballot for this project, he wants to see specific things before he will support that project. “The actual specifics make a lot of difference,” he said. “Even with the second crossing,” he said, “there are many shapes and sizes of this project that would not be acceptable to me.”

Councilmember Lee offered different language, “supportive of a June election for this project but leave it relatively vague.” Among his concerns were what the county-city tax sharing agreement would look like.

The motion eventually became to “direct staff to move forward with the applicant as if they were preparing for a June ballot with the understanding that questions need to be answered before council will take formal action to place it on the ballot.”

Earlier, Councilmember Brett Lee said he found it “curious” that people referred to the second crossing as “the key event” in terms of the project moving forward. With a single access point, he noted, the draft EIR shows a Level of Service (LOS) F at the Richards-Olive intersection. However, with the two access points, there would also be an LOS F at the intersection.

He said he agrees with the notion that “that level of service F is unacceptable.”

He suggested a phased approach, saying that “the idea would be at each phase Level of Service F would not be encountered at Richards and Olive.” He said he would support a June ballot “provided that the applicant could produce a phasing proposal which would not trigger a Level of Service F at our intersections.”

This would allow the project to move forward and the public to have more certainty, as they wouldn’t have to worry about the university approving the second access point. The applicant could have an initial build and when a second access point or corridor improvements on Richards were implemented that would allow additional housing to be built at that time.

“With student-oriented apartments,” he said, “they have an ability to discourage the use of automobiles.”

Councilmember Lucas Frerichs added that the issues of access have been the key topic since this project was first discussed. “Access to this site,” he said, “that is the lynch pin across which the success or failure of the site hinges upon. For me, particularly the proposed grade-separated crossing the tunnel through the university, having that second access point, is absolutely essential.”

He said, “It’s got to be something that is on the front end of the project.” He added, “I do think it’s a really great site. It’s probably one of the best sites that the city has to develop – in terms of infill but also transit oriented development… But it has a lot of natural constraints.” He noted it is wedged between the highway and the railroad and the university, which creates complications.

Katherine Hess noted, about the timeline, that “it is a very tight schedule, there are a couple of weeks in there, but not much.”

Councilmember Lee said, “Kind of where we are tonight leaves the applicant in a little bit of limbo because we’ve kind of talked in generalities – I would be interested in sending them a signal that if they were able to come up with a proposal that did not generate Level of Service F traffic in segments and intersections, that this would be something we would be supportive of putting on the ballot.”

Robb Davis stated, “We need to signal clearly to the university that we want to move this forward and that we need them to act.” He added, “We need action from them. We can’t expedite that action but we can say we’re ready for you now to do your part.”

The council was ultimately willing to move forward at this point, but it is very clear that, without addressing traffic impacts through either a phased approach, reduced vehicles or a second access point, this council is not going to put Nishi on the ballot.