The parents stood in line, groups of four, awaiting the chance to voice their opinions about a hot button educational topic in the community of Davis, California. The time, now approaching 10 p.m. on a Thursday night, was of no real concern. They were there for a reason.

Inside the town’s City Hall Community Chambers, November 5, one by one, the men and women stepped to the dais and gave their two-minute-long comment to the five members seated representing the Davis Joint Unified School District (DJUSD) Board. Hearts were pounding and mouths were dry. Many of the speeches oozed with passion. After all, this was about fulfilling the future needs and potential of their children.

The meeting’s contentious main item for discussion, the recommendations of the AIM (Alternative Instructional Model) program, was scheduled to meet its fate – a culmination of a five-month-long process vetted out by the trustees, filled with spirited discourse on hardline issues like testing phase-in plans for qualification scores, assessment identification and verification, and the hiring of a differentiation specialist.

Superintendent Winfred B. Roberson, Jr., who said, “There was no shortage of opinions and ideas” on the subject, led the presentation, in which he provided an overview of the item’s five recommendations.

Prior to the public comment portion of the meeting, in which many were upset that the issue had become the centerpiece of the forum agenda, board members shared their questions with Roberson and his team, asking for clarification on a number of important matters that will assist in the academic and social lives of third graders attending one of the town’s eight elementary schools.

“Let’s not make it a qualification-based program, let’s make it a need-based program,” said Davis resident Jill Van Zandt, who believes the program is based on the assumption that some kids are outliers. “Let’s all stick around, get on board and support our teachers. Let’s go for it!”

In the words of Board Member Barbara Archer, a gradual change in time is what people are asking for. What’s most important, she stated, is the “development of the most successful criteria to assess their need for the program.

“I think if we are looking at the program as a needs-based program what is not fair is to put a student into a program who doesn’t need it…and I don’t view this as taking away choices away from any students. AIM is not a choice program.”

Ultimately, after all the involvement, a decision had to be made, and just after midnight – following a final round of general discussion – the board took action, approving all five items in unanimous fashion.

True to form, considering how divisive an issue it had been, and how many hours (22) were spent talking about it, the one point of contention even in approval was about the program’s cut off scores, and whether a 98-percentile cut off would benefit students, compared to phasing in the measure of assessment after two years.

Board member Susan Lovenburg brought a motion that would change the score from the 96th percentile after only one school year (2015/16), rather than the initial proposal which called for a gradual climb, thus eliminating the need for three sets of data.

As for the public commenters, some asked why the board was fixing something that was not broken to begin with, and sentiment was mostly on the side of not supporting the phase-in part of the item, although many expressed their fear of reduction.

Board President Alan Fernandes, who called the called the phase-in approach a “prudent course of action,” emphasized the need to keep an eye on the decisions being made and their relationship to the size and breath of the program.

In her statement, Board Vice President/Clerk Madhavi Sunder noted that “cutting the number of AIM classrooms will not cost a single dime,” and that the inordinate amount of attention paid on the program has redirected precious time and resources away from equally pressing educational/financial concerns.

These types of issues were distressing for her during the process. 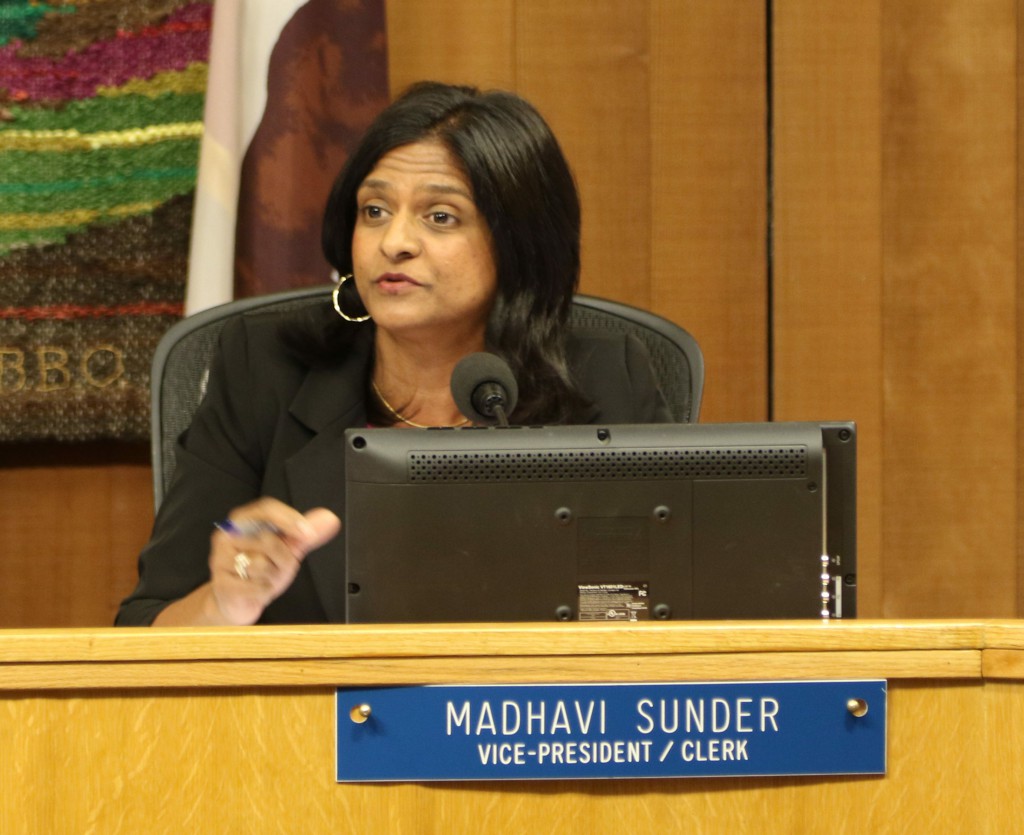 “We have classrooms at Montgomery that are one hundred percent low income,” Sunder said in her statement. “We have a persistent achievement gap in which low-income children in Davis continue to score below proficiency.”

Lovenburg stressed how important it was for the community to be unified, in what she labeled “a movement,” and that, at its core, “parents want kids to be challenged and allowed to fulfill their potential.”