The Davis Enterprise this week strangely ignited a side-issue on GATE/AIM – what was the initial purpose of the program? I find it interesting that the returning of the program to its initial purpose “designed only for students who had significant trouble learning in a regular classroom” was part of the paper’s justification for supporting the revisions to the plan.

On the contrary, given the Superintendent’s admission in September that their identification tools do not discern between high ability and high achievement, I think raising the bar to the 98th percentile actually achieves the opposite result –it makes the high achievement portion more pronounced rather than less pronounced.

We need to take a few steps back here as there are several issues that need to be addressed. Originally, I was hopeful that the Superintendent could craft a proposal that everyone can support. That this reached a 5-0 vote is a bit misleading. The divisions in the community remain far deeper than perhaps the divisions on the board itself.

It is important to note that the board was supportive in unanimity on all changes but the qualification score. Here, Madhavi Sunder’s support for this motion remains more strategic than substantive. She clearly recognized that this was the best she could get.

She added that she was prepared to support this because the motion preserved “the ability to monitor next year, but I do think going slower would have been a better course of action.”

Of chief importance to Ms. Sunder was the identification of high ability students in diverse populations. She said, “If it’s not working then I’m going to make the case that we not continue it.” She argued that, by voting for the motion tonight, she preserves her ability to bring it back in the future.

My original hope was that if the board crafted a policy which everyone could agree on, the community would be able to move forward. Despite the 5-0 vote, I don’t see this as resolved in any way, shape or form. And while some board members clearly did not want it to come back next year – I see no way to avoid it. 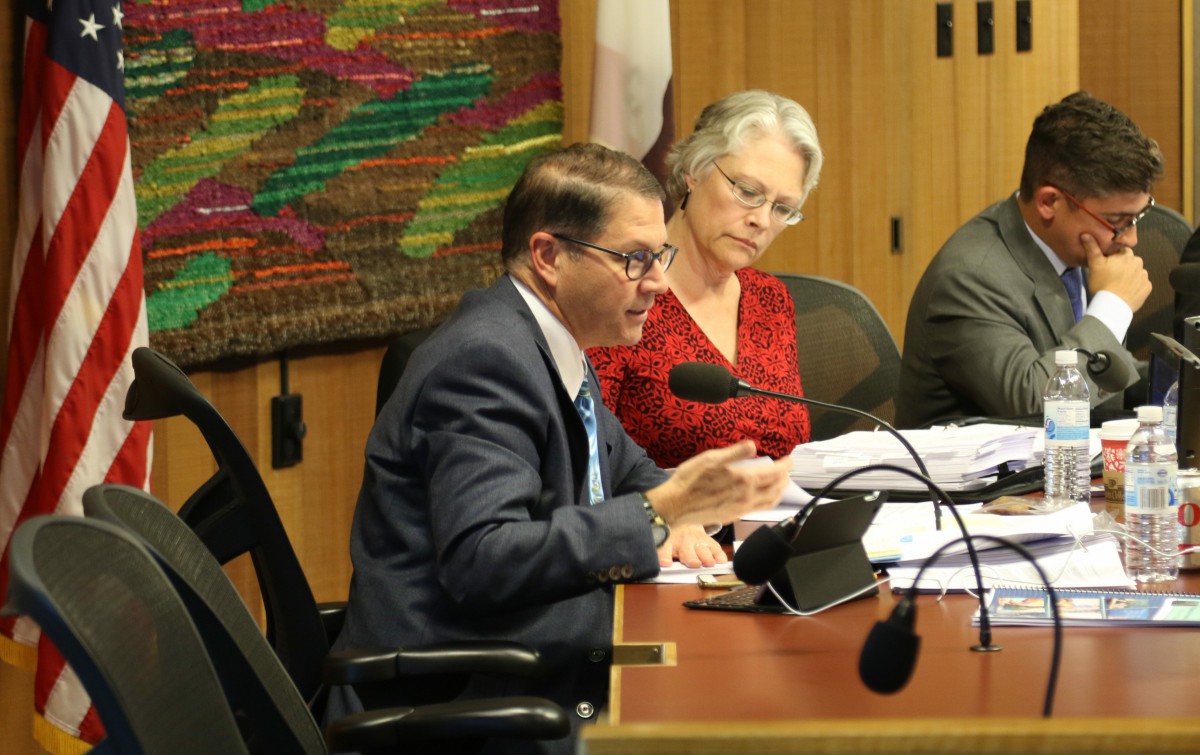 As a public commenter put it on Thursday, this is the opening salvo of the 2016 School Board elections, where it seems likely that Susan Lovenburg and Alan Fernandes will seek reelection and where their votes on the GATE/AIM issue may become the central part of the campaign.

Earlier this week I noted that the parcel tax support is far more fragile than it has been in the past. Part of that is the improving fiscal situation, part of that seems to be a growing frustration with the way in which this issue was handled. In the past week, I have seen some former stalwarts of parcel tax questioning whether they will support the next one.

Given that we have no idea how deep that anger goes and whether people will actually pull the trigger on it – it is possible despite some misgivings, when push comes to shove, calmer heads will prevail – a more measured approach would be better.

I will say I was a bit surprised when longtime school board member Susan Lovenburg called this the most important issue facing the board. I think long-term funding and the achievement gap clearly rank higher. It is for that reason that I am disappointed in this outcome.

As a believer that major public policy changes should be rooted in evidence-based approaches, I am troubled by the lack of foundation for changes to the qualification score. Once again, on Thursday, Superintendent Winfred Roberson acknowledged that there was no “hard science” here in supporting one qualification score over another.

While I understand that many are very much concerned over the identification process – the other motions spoke strongly toward cleaning that process up. The district is ending its much criticized private testing aspect of identification. It is streamlining the retesting procedures to have a much more stringent protocol determining when and how students will be retested.

Any real problems in the program seemed to rest there, rather than in the size and scope of the program.

Even the strongest supporters of the change did not seem to articulate a reason for the 98th percentile. Efforts to link it to June 4 motion seem specious at best.

That being said, the outcome of what these changes will mean remains unknown. That is why phasing in the qualification scores was critical. By implementing the changes to the protocols first, we could assess what changes those will bring. By adding increases to the qualification scores later, we could assess their impacts independent of each other.

It was important, if not cited, to recognize why those needed to be separate processes. Making too many changes at once risks not being able to assess which changes produce which result. That would be extremely problematic if an adverse change occurred.

That is where I am most troubled in all of this. Madhavi Sunder went to great lengths late in the meeting to make sure we could assess the impact on the diverse student populations. My concern is that raising the qualification score will mean a much less diverse program and a much more heavily white and Asian representation than the current program.

Will that happen? The good news is that we will have one year to assess the impact of some of the changes. Unfortunately, by streamlining and shortening the phase-in, we run the risk of not knowing the full impact of the changes to qualification scores until the program is fully in place.

Will the board members be willing to alter the program if these changes prove too drastic? If the number of blacks and Hispanics precipitously drops? I don’t know and that is where I am most concerned with these changes.

For all of the students and all of the care, the Superintendent could still not tell us what size the program will be and what the ethnic makeup will look like.

58 thoughts on “My View II: Where We Are Left on GATE”