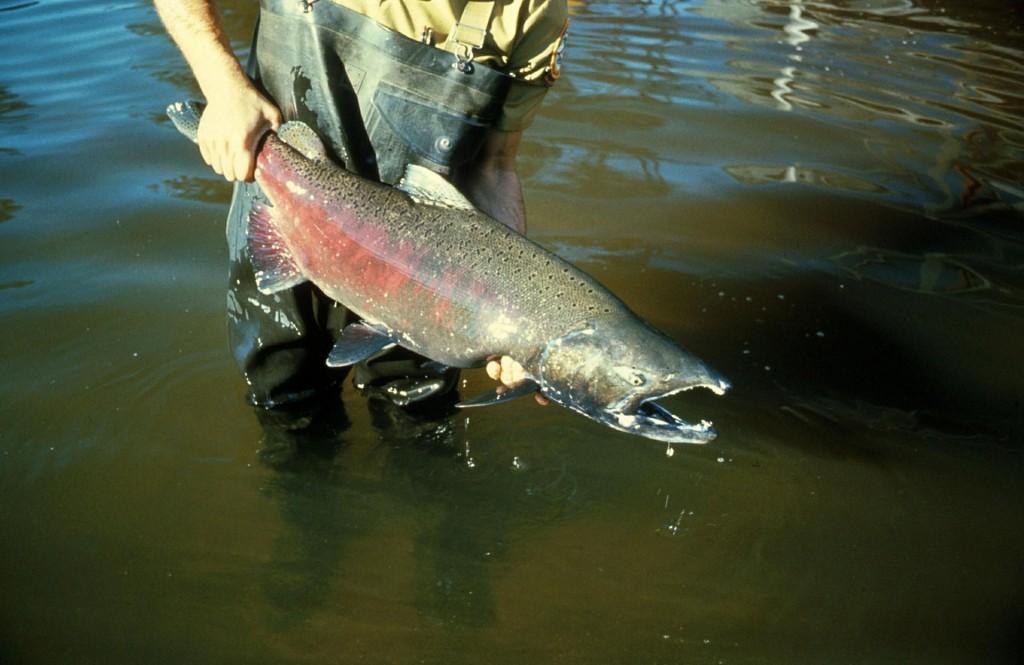 “Florence: Who knows anything about fish?
I mean fish don’t tell you anything much do they?
You ask ‘em a question, they flop around……”
Israel Horovitz – North Shore Fish

On a cold breezy morning in Friday Harbor Washington I was fishing off the main pier watching a well dressed angler lose his prize catch of a King salmon to a sea otter. This was in 1982 and the Chinook/King salmon were far more plentiful than they are today. My fishing expeditions on the pier and in the Puget Sound were a daily event back then. And the catch was always a good one. Here we are, just 33 years later, approaching the end of 2015 and the Chinook are a listed endangered species.

The effect of the current climate crisis on our fisheries, rivers and oceans is nearing devastation. We have a serious threat of sea level rise which, left unchecked will flood many regions of the world. Ocean warming and acidification is happening much faster than science predicted for this point in time, with some areas dying faster than we ever thought possible. Ocean temperatures have risen so high that the blue whale, an endangered species, is feeding closer to shore causing them to be caught in commercial fishing nets. The dungenss crab population is infected with high levels of toxins in the water. Domoic acid, a neurotoxin that can accumulate in shellfish and other invertebrates is attributed to a massive toxic bloom of algae called Pseudo-nitzschia developing along the California coast. Algae blooms in the ocean are common but this bloom is large and tenacious and is also caused by warmer ocean water temperatures. This neurotoxin is deadly to humans and birds that eat the infected fish.

The coral reefs, often referred to as “ jungles of the ocean,” provide habitats for a million or more species of ocean life, are vanishing at the rate of 1% per year through anthropogenic ocean acidification and warmer waters primarily caused by climate change. Add to that mix overfishing, pollutants and an inconsiderate tourist industry and some have said that we will not have any living coral reefs on the planet in as little as 40 years, some say sooner. Caribbean coral have plummeted 80 % or more since the 1980’s leaving just 10% on average of available surface area today. We know now that what’s happening in the Caribbean is a microcosm of a global trend: the speed at which the ocean is warming and is over acidified will prove too much for the coral and we can look forward to 90 percent of the world’s coral at risk of disappearance by 2030. That quick and devastating change is not one to be tucked away in denial. The Caribbean system may be one of the first systems to experience collapse but it will become a global collapse if human use of coral reefs and the climate crisis continues as it is.

For as long as we can remember humans have been harvesting foods from the ocean. (Back in the 80’s I was one of many that received most of my protein intake from ocean fish). Ocean harvests have become so large that within the last two hundred years we have successfully wiped out or transformed marine habitats beyond recognition.
Wild Salmon, Sea Bass, Cod and Tuna are four fish that we have exploited to near extinction. With the potential loss of the coral reefs we will be seeing even greater losses of ocean life.

The Wild Chinook/King salmon are a case in point. For the first time in years, state fishing regulators in Washington State canceled the recreational fishing season for Chinook salmon in central Puget Sound, sighting ongoing concerns about ocean conditions and a very low snow pack that is expected to lead to an increase in water temperatures. Salmon depend on fresh, clean free flowing cold water and we are at a crucial point in our relationship with the oceans and the history of human consumption of animals wherein the decisions to take or leave a wild species are critical to the survival of that wild species. Here in California litigation by environmental groups were filed against the U.S. Bureau of Reclamation and Sacramento River settlement contractors for alegedly taking water that would have supported the fish. One more year of a lack of cold water could mean an end to the Wild Chinook.

Warming waters and low snow packs are not the only threat to our fisheries. Consider the fractured relationship we humans have with the ocean and its inhabitants; rampant overfishing and an un-tethered biotech industry have brought us to a point where farmed fish are invading the waters of the wild fish. If all of this continues, there will not be any more of the famous four fish in our fisheries. Is there a way for us to move toward a future in which healthy and sustainable seafood is the rule rather than the exception? The answer is doubtful and dependent on many decision makers.

The conclusion of the California Climate Change Symposium that was held in Sacramento on the 24th and 25th of August 2015, is reported via headline in the 25 August 2015 edition of the Daily Breeze: “California climate researchers sound the alarm at symposium: ‘There’s no way out.’”

Susanne Moser, a leading Santa Cruz-based climate change researcher, was quoted in the article: “We need transformational change. We don’t need more studies as much as we need to communicate the urgency …. We need to not debate forever.” A scientist admitting we don’t need more study of an issue is stunning and sobering.

Two sets of decision makers (among several) help to safeguard our wild fisheries, our oceans, and the health of the planet: In the Pacific Northwest federal and tribal fishery managers gather to plan the recreational and commercial salmon fisheries in a series of meetings known as the North of Falcon process. It is in these meetings that decisions are made about the fate of the fish within the northwest region. If the people in the North of Falcon meetings can soon halt the hunting of the Chinook the fish may have a chance of survival. However, the big decisions made at this years United Nations Climate Change Conference, held in Paris, from November 30 to December 11 are the most important decisions to be made on behalf of our fisheries and oceans. The objective of this conference is to determine the fate of the planet (and everything that lives on the planet), by attempting to achieve a universal agreement on climate from all nations with the goal of capping warming at 2C over pre-Industrial Revolution levels. If the talks are successful we may have a chance to save the oceans. If they are not successful, well, in the words of general secretary Sharan Burrow, there are “no jobs on a dead planet”.

The alarm bells of the climate crisis have been ringing for most of my life, more than fifty years. That 2c cap is fast approaching. The World Meterological Organization (WMO) in their 2014 report stated that the planet was at 400 ppm but this March global levels of CO2 passed the 400 parts per million mark. This is the first time since records have been kept that CO2 levels have risen this high and stayed this high globally for over a month. This is an ominous sign and one that tells us we need to send a clamoring message to the leaders at the Paris climate talks this December. “We will soon be living with globally averaged CO2 levels above 400 parts per million as a permanent reality,”said WMO Secretary-General Michel Jarraud. “Carbon dioxide remains in the atmosphere for hundreds of years and in the ocean for even longer. Past, present and future emissions will have a cumulative impact on both global warming and ocean acidification. The laws of physics are non-negotiable,” said Mr Jarraud.

According to an article in Scientific American ; “We aren’t done yet. Greater concentrations will be achieved, thanks to all the existing coal-fired power plants, more than a billion cars powered by internal combustion on the roads today and yet more clearing of forests. That’s despite an avowed goal to stop at 450 ppm, the number broadly (if infirmly) linked to an average temperature rise of no more than 2 degrees C. More likely, by century’s end enough CO2 will have been spewed from burning long-buried stores of fossilized sunshine to raise concentrations to 550 ppm or more, enough to raise average annual temperatures by as much as 6 degrees C in the same span. That may be more climate change than human civilization can handle, along with many of the other animals and plants living on Earth, already stressed by other human encroachments“.

It’s time to act and act quickly. As Fatih Birol, the IEA’s chief economist, bluntly put it: “The door to reach two degrees is about to close. In 2017 it will be closed forever.” We are now in what some activists are calling “Decade Zero” of the climate crisis: we either change now or we lose our chance.
The consequences of failing causes my heart to ache for those that have no recourse and are depending on us to help sustain them.

What can you do to influence the Paris talks? Call your elected representatives and tell them to put every effort into mitigating the climate crisis and then “write a letter to the future“. It is a sobering and humbeling excercise, one that may well change some minds and hearts for the better. As part of the Paris Climate Project a call for letters is out to predict the success or failure of the Paris talks. The letters will be sent to targeted delegates and citizens convening at the Paris talks. My letter is there along with the letters of Michael Pollin, Bill McKibben, Senator Lois Wolk and many others. You can write yours now. The climate crisis depends on all of us to fight and do our part. What you do (or dont do) today may save many from harm.

Ecologist Garrett HardiIn in his 1968 essay The Tragedy of the Commons published in the journal Science noted, “natural selection favors the forces of psychological denial. The individual benefits as an individual from his ability to deny the truth even though society as a whole, of which he is a part, suffers”. “But, in terms of the practical problems that we must face in the next few generations with the foreseeable technology, it is clear that we will greatly increase human misery if we do not, during the immediate future, assume that the world available to the terrestrial human population is finite. “Space” is no escape.”    We must take care of what we have.

Share:
Tags:Climate ChangeEnvironment
Previous : Wolk Picks Up More Big Endorsements in the Assembly Race
Next : Commentary: One View of the Legacy of Chief Landy Black

13 thoughts on “North Of Falcon In Decade Zero: Decisions And Life On Earth”