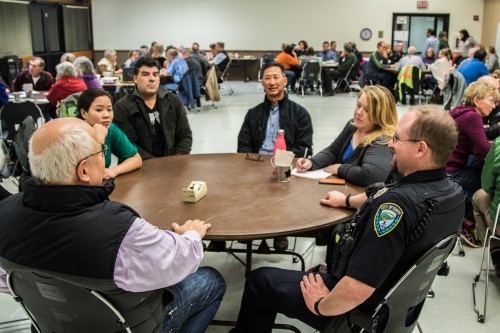 The UC Davis students really have not weighed in yet on potential changes to the Davis Downtown late night scene. Having attended the discussion on Wednesday night, I was concerned with the overwhelming number of residents there from the over-50 persuasion (even as some have reminded me I’m rapidly approaching that plateau myself).

At the same time, despite the heavy demographic tilt, I was heartened to hear that there was a relatively evenly distributed set of responses about whether the business association or the community should be setting the limits for the bar venues. There was not an overwhelming or uniform push for earlier closings.

As Assistant City Manager Kelly Stachowicz put it, “There was not clear consensus among those in attendance how the City should proceed, with responses distributed relatively evenly along the spectrum of placing community limits and allowing for individual business discretion.”

My concern from the start was the overwhelming pushback against the late night bar scene based on a few very bad incidents, starting with the murder at KetMoRee, continuing with the rape in the park from people who had been at Bistro33, and continuing with an attack near the downtown with a baseball bat.

A reward has been offered for information leading to the prosecution of the attackers who assaulted three young men, at Sixth Street and F Street last Saturday at 1:40 am, as they were walking home from a bar.

Part of the problem is we tend to focus on a few anecdotal and horrific incidents, while losing sight of the big picture that Davis Downtown remains much safer than other locations in the region – and our crime rate is steady, even in the downtown, if not slightly declining.

I am supportive of the measures that the council took to date in allowing Blondies to go forward – these include changes to the seating requirements, security improvements, additional patrols in the downtown, and culminating with wanding.

But I am very reluctant to go further. In talking with Heidy Kellison, for instance, she said, “My viewpoint has not changed at all about businesses coming to town that have business plans elsewhere that objectify women and open a potential for an atmosphere that encourages people to act unlawfully.”

My view has not changed either on this. I agree with her, that we do not need more bars and late night facilities in the downtown. However, I don’t think that a group of citizens who never utilize the services, or the government, should be the ones to make that determination.

The idea that I remain most opposed to is the idea of shutting down the bars earlier. Some, like Michael Harrington, have suggested 12 midnight as an appropriate closing time. The premise is that most of the problems that occur seem to occur late in the evening. By shutting down early, they argue, out-of-town consumers who are the ones, in their view, who are causing most of the problems, would go elsewhere.

Having covered court cases for nearly six years, I don’t really agree that it is outsiders who are causing these problems. We have covered barfights, assault trials and even rapes, and, as often as not, the people involved in these cases are UC Davis students – not some sort of outsider. We don’t have data on the downtown crime to see the breakdown, but that would seem to be an important piece of information that is missing.

However, that issue aside, I think that changing the time for serving alcohol to 12 is not going to change a lot of the problems and could, in fact, lead to new problems.

First, students operate on a different clock than older residents. I remember the days when we didn’t go out until after 10 pm. A 12 am closing time wasn’t going to end our evening – we would have taken it to Sacramento or another community that has bars open later, or we would take it to a house party.

When the Vanguard held its forum on October 14, this was the point raised by both the students and the police – that an earlier closing time would push the drinking either across the causeway or into the neighborhoods.

Pushing it across the causeway would mean that we would have a lot more drinking and driving. The city of Davis and UC Davis has actually done a good job of getting kids out of their cars when they drink. You see many walking from Russell to downtown so that they don’t have to drive home drunk. We have things like Tipsy Taxi, that encourage people not to drink and drive. Changing where students drink could upset that delicate balance.

The second problem, one that the police and students raised as a concern, is that having people gather in the downtown to drink actually isn’t the worst thing – they are in regulated establishments, drinking and safety can be monitored, and the police can keep tabs on them.

Pushing parties into the neighborhoods leads to conflict with older residents who want their quiet, it leads to a greater chance for underage drinking, and it leads to higher probabilities of sexual assaults and other problems in the unmonitored situations.

So yes, we can shut down the late night scene downtown earlier, but that is not going to make the problems go away and might make them more difficult to address.

I think the best approach at this point is to implement the Blondies regulations universally and come back in six months to see how things are going – we can always change things if things are not improving.

58 thoughts on “Sunday Commentary: A Midnight Bar Closing Time is a Bad Idea”