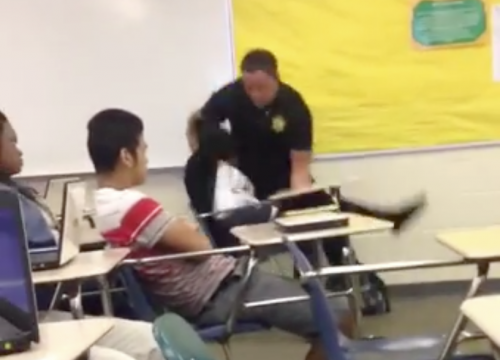 Leaving aside any racial implications involved in the incident at the high school in South Carolina, it troubles me greatly that the students would be protesting the firing of school resource officer Ben Fields.

One student told The Huffington Post that even though he did not agree with Deputy Fields’ conduct in the student arrest, the officer did not deserve to be fired. John Cassibry, a 17-year-old senior who participated in the protest, said, “My belief on Deputy Fields is just that – I do believe he was too aggressive, but I do not believe it was any circumstance to lose his job, nor do I believe it was race-driven.”

Everyone of course is entitled to have an opinion, but what Deputy Fields did, regardless of what the student who ended up being arrested did, was dangerous, it violated use-of-force guidelines, and it was a gross violation of department protocols. Add to the fact that this wasn’t Deputy Fields’ first violation and it was a no-brainer for the Richland County Sheriff.

“From the very beginning that’s what’s caused me to be upset, and continued to upset me, is that he picked the student up and threw the student across the room,” Sheriff Lott said.

To anyone who believes that a 100-student protest vindicates the conduct of the deputy, I very strongly disagree.

The second issue, of course, is the racial implication of this incident. Some have pointed to the fact that Mr. Fields has been dating an African-American woman for “quite some time” as evidence that race was not a factor. There is also the mixed-race nature of the student protest.

I have long believed in the need to have dialogue on issues of race. African-American communities have long believed they have been singled out due to race. Police and their defenders believe that any disproportionality is related more to the concentration of crime in areas with large percentages of minority population.

But, if anything, these situations are far more complex than anyone wants to believe. The issue is generally not that of overt racism in the classical sense. The number of people who believe blacks are genetically or otherwise inferior to whites at this point is minutely small. As is the number of people who believe we should go back to segregation and separate accommodations based on race.

The issue of unconscious bias is far more complex. We need to explore how the brain processes information. As Michael Roosevelt – an expert in implicit/unconscious bias, who has trained thousands of attorneys, judges and police officers – explained in his keynote address at the San Francisco Public Defender’s Justice Summit last spring, the brain is really primed to make a lot of quick decisions based on a lot of information.

He said, “So the research shows, the people that study the brain, it shows that we tend to categorize. This is a normal process.”

“We tend to look at the other people as all the same and we look at our group as unique,” he said. “This is critical. Sometimes we make in the brain, what we call exceptions to the rule.” Or, as he put it, imitating the effect: “You are not like the other black people. I don’t think of you as being black.”

Stereotypes are important concepts. “These are things that we generalize about a group, based on some shared characteristics,” he said. “Often times stereotypes involves projection – what we want to believe about that group.”

Is it conceivable that a police officer could date an African-American while at the same time viewing the subjects he encounters in his line of work as inherently more dangerous if they are black – and therefore, at a subconscious level, respond differently to the perceived threat level based on race?

For some we are delving dangerously into the hypothetical – but if we are really going to get to the bottom of this problem – we cannot simply dismiss conversations about race based on hypotheticals.

The New York Times analyzed “tens of thousands of traffic stops and years of arrest data in this racially mixed city of 280,000” and found “wide racial differences in measure after measure of police conduct.”

Police officials defend this discrepancy, arguing that “most if not all of the racial disparities in their traffic enforcement stemmed from the fact that more African-Americans live in neighborhoods with higher crime, where officers patrol more aggressively. Pulling over drivers, they said, is a standard and effective form of proactive policing.”

But to me what was really interesting is the two-level data picture that emerged.

As the Times points out, “By itself, that proves little, because other factors besides race could be in play. Because African-Americans are, for example, generally poorer than whites, they may have more expired vehicle registrations or other automotive lapses that attract officers’ attention.”

It is another set of data that ends up more telling, and that is what happens after the vehicle is pulled over. Do the officers use their discretion to search the vehicle?

The Times finds, “In the four states that track the results of consent searches, officers were more likely to conduct them when the driver was black, even though they consistently found drugs, guns or other contraband more often if the driver was white.”

It is important to understand that they are finding contraband more often if the driver is white, probably due to the fact that they are using a lower threshold to search black vehicles than white vehicles.

Finally, this incident draws on another issue and that is the criminalization of disruptive behavior by students. The female student here was disruptive in class and was texting on her phone. The teacher asked her to leave and she refused.

The recourse by the teacher was to call the police and South Carolina has a criminal statute that makes disrupting a class illegal. But is this the best approach to dealing with disruptive students?

There are other approaches that are probably more effective than introducing young people to the criminal justice system for nuisance level violations of the law. Studies have shown that delaying the intervention of law enforcement is a better practice.

The work of Ron and Roxanne Claassen, authors of Discipline That Restores, is an alternative approach.

Mr. Claassen said that he had already founded the Center for Peacemaking and Conflict Studies when his wife, an eighth grade teacher, came home and said the structure of discipline in the schools is very similar to the structure of the criminal justice system.

Mr. Claassen is the Director of the Restorative Discipline Project and Professor of Peacemaking and Conflict Studies, Fresno Pacific School of Education. He has served as a teacher, pastor, consultant, trainer and mediator in church, business, school, criminal justice and other settings. He is co-founder of the Center for Peacemaking and Conflict Studies, as noted above, and founder of Fresno VORP (Victim Offender Reconciliation Program).

Restorative justice in the classroom, he said, does not mean that things are let go or that chaos is allowed to rule. It begins with the concept that whatever response there is going to be to misbehavior is going to be a constructive response.

“What we’ve been working at is developing a series of options so that,” he said, if one approach does not work, they have alternatives. “It is all to work in the direction of the student accepting personal responsibility for what they’ve been doing and thinking about how they want to move forward.”

“When there has been an infraction it can be a process for how you repair that infraction,” he said.

In a case like this, why not have the teacher take the rest of the class out of the classroom and bring in a counselor to talk with the student? It could hardly disrupt the class more than having an officer come and arrest the student, throwing the student across the room.

There has been less talk about why a student would steadfastly refuse to get off the phone when asked, and there is obviously something deeper than the instant issue and that needs to be addressed. Bringing it into a law enforcement realm will make it less likely to be resolved in a satisfactory way.

In the end, we have three different aspects of this incident that need to be addressed. First, the egregious behavior of the law enforcement officer was addressed, but it is concerning that the students would find this incident not egregious enough to warrant firing the officer. Second, the racial aspect is complex and not easily resolved, but punting on this discussion is unlikely to change things. Third, we need a better system to handle student discipline issues and I think a restorative approach is the way to go.