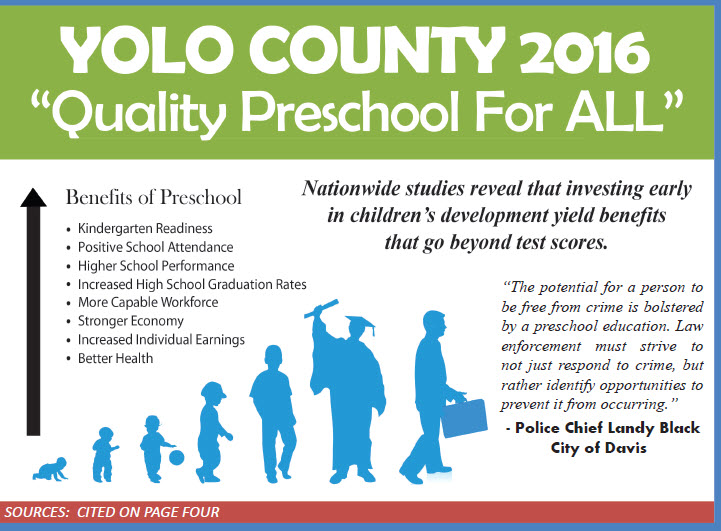 Last week in looking at factors causing the Davis school achievement gap, we cited the problem that preschool is not universally available to all students. That problem is compounded by the fact that DJUSD has no hard data on how many children are or are not attending preschool and how that impacts the achievement gap.

According to literature from the Yolo County Superintendent of Schools, Jesse Ortiz, “A school readiness gap exists for the youngest learners in Yolo County. At least 41% of three and four year olds in Yolo County do not experience preschool before starting Kindergarten. Income disparities, rural location, family mobility – all present significant lifetime challenges that could be overcome by a quality preschool for all education system. Our entire county community would benefit from this system and the resulting overall positive economic impact.”

Mr. Ortiz, along with a growing coalition of elected officials ranging from Congressman John Garamendi and Senator Lois Wolk, to Supervisors Jim Provenza and Don Saylor, down to local school board members in Davis (Barbara Archer and Madhavi Sunder), Woodland (Cirenio Rodriguez and Tico Zendejas) and West Sacramento (Norma Alcala) are pushing for a Yolo County 2016 “Quality Preschool For All” measure that provides preschool for all Yolo County kids.

The program would be modeled after the 2002 Measure K approved by West Sacramento Voters – “Universal Preschool for West Sacramento.” According to the Superintendent’s literature, “A 2014 evaluation of the program found it to be a success.”

Based on that success, “Yolo County preschool advocates propose the implementation of a quality preschool program for all children in Yolo County.”

The proposed preschool system would be one that is available to every child, regardless of family income, the child’s abilities, or other factors. Yolo County’s program would provide full-day, full-year quality preschool for all three-year-olds and eligible four-year-olds.

They write, “The adoption of preschool for all would address the current gaps in service provided by Transitional Kindergarten and preschools while ensuring that all three- and four-year-olds are ‘Kindergarten ready’ by age five.” 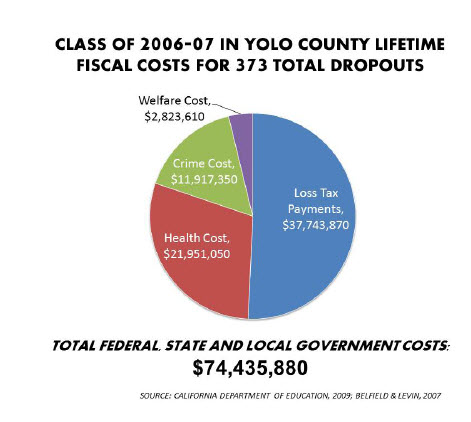 “Yolo County’s program would be developed with the support of existing private and public preschool providers in the area, and would strive to complement – rather than duplicate or replace – existing programs. The program would put in place a standardized accountability system to measure teacher quality that could be expanded and replicated to area school districts,” the advocates write.

“Yolo County preschool advocates firmly believe that all children should start Kindergarten prepared to succeed. By giving them the best possible start in life, we will ensure an educated workforce and positive economic growth far into the future.”

They continue, “Providing a full-day, full-year service to employees will enhance the area’s current offerings of affordable childcare for the workforce. Children, families, and subsequent local classes will all benefit from the additional training and professional development received by preschool providers.”

According to the literature, “A high-quality preschool education is critical to ensuring that children start Kindergarten on a level playing field with their peers. Since the 1960’s more than a hundred studies in the United States alone have shown that preschool attendance significantly benefits children’s school readiness and success. Without access to preschool, low-income children and dual language learners often start behind and stay behind as they progress through school.”

They cite research that shows that children who attend preschool are 24 percent more likely to pass reading tests through grade three, while those who do not read well by the end of third grade are four 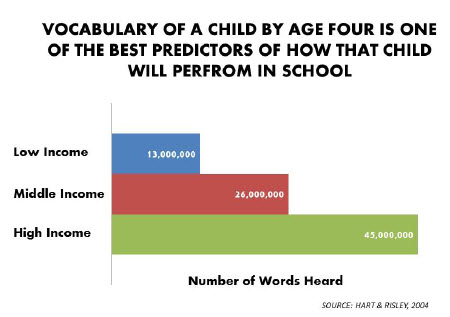 “Programs like Head Start, while intended to expand access to preschool for low income families, have not reached large segments of the population,” they write. Last week, we noted that Head Start only reaches 450 students in Yolo County. In the meantime, “Income scales are often set too low, with the working poor and middle class ineligible altogether. In contrast, preschool-for-all programs reach all children and provide for the most efficient use of best practices, curriculum, and teacher development programs.”

According to a 2014 study, nearly 15,000 children ages 0-5 live in Yolo County. There are approximately 2,400 births annually. In 2015, an estimated 59 percent of all three- and four-year-olds in Yolo County were enrolled in a preschool program.

“Since 2008, the total number of subsidized child-care slots in Yolo County has decreased from 3,277 to 2,288 – leaving even more families without affordable, quality childcare options. The Yolo County Office of Education estimates that approximately 2,000 three and four year olds who qualify for Head Start and state-subsidized preschool are unable to find placement in these programs due to the long waiting lists,” they write.

Superintendent Ortiz notes that Measure K, the funding Mechanism for “Universal Preschool for West Sacramento,” was funded with a half cent override of the sales tax. He believes that between half a cent to a cent countywide could fund “Quality Preschool for All.”