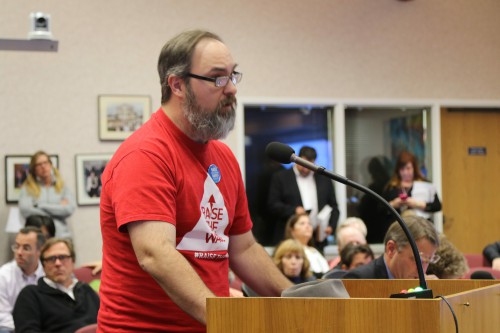 A number of organizers for a minimum wage hike came to city council on Tuesday night to support a new initiative.

Joaquin Chavez noted that, along with the holiday festivities, “I was called to think about a dark cloud that hangs over our community – it’s the crisis afflicting low wage workers and their families. A crisis that is characterized by both stagnating and even declining wages, loss of jobs, loss of working hours and an ever-increasing cost of living.”

“We need to take the kinds of actions that are within the power of the city to address some of these problems,” Mr. Chavez said. “We do have certain choices we can make – we can support local initiatives, local proposals that can support and raise wages for the low wage workers in our community.”

Mr. Chavez pointed out that, since the start of the Great Recession, many of the jobs lost were of the middle wage variety and they were replaced by jobs that were far lower in wages and benefits.

“This is a problem that falls primarily on our communities of color and other marginalized communities and it’s time that we saw some sort of proposal coming out of the city leaderships and support for local initiatives that can move us forward in addressing this problem,” he concluded.

Sean Raycraft with Davis Citizens for a Living Wage followed up by asking the council “to address the issue of income inequality and to find a policy solution that will specifically target Davis.”

John Rungin, the president of the union that represents librarians and lecturers at UC, said, “I see as an educator the deleterious effects of [in]equality all the time at the university, it’s sort of a creeping rot in our society. It’s something we have to address. I don’t think it’s going to go away unless we take positive steps.”

He said he supports the addressing of the issue by the city of Davis.

Jeff Otter, with UAW (an affiliate of the United Automobile, Aerospace and Agricultural Implement Workers of America, or simply United Auto Workers) 5810 representing the Post Docs at UC Davis, pushed for a task force. However, he noted that the task force in Sacramento, which pushed for the minimum wage compromise bill, is a cautionary tale.

According to Mr. Otter, they had a good goal of finding a compromise. “It seems to me that the question to answer is not what’s a good compromise, the answer is what’s the right thing to do.”

He quoted President Roosevelt’s statement: “A minimum wage is intended to be a living wage not a mere subsistence wage, but a decent living.” He said, “That seems to me an appropriate goal for a task force that intends to address income inequality.”

In October, the Sacramento City Council approved a compromise measure that would increase the minimum wage to $12.50 an hour by 2020, with increases after that date linked to the Consumer Price Index.

However, in July, the state legislature once again failed to act on a minimum wage hike that would have raised state minimum wages to $13 per hour over the next two years.

Assemblymember Jimmy Gomez, chair of the Assembly Appropriations Committee, suggested he would look for other changes to advance Senate Bill 3 next year.

“Californians need an approach to raising the minimum wage that is sensitive to local economies and is appropriately accounted for in the state budget,” the Democrat from Los Angeles said in a statement. “The Appropriations Committee will work with the Legislative Analyst’s Office, the speaker and others to ensure we review a comprehensive array of options to rationally increase the minimum wage throughout the state, including the potential for regional increases that reflect differing economies.”

Senator Mark Leno, who sponsored the bill, stated, “My strong support for a statewide minimum wage that raises California families, women and children out of poverty is unshakable.”

The bill also would have tied the state’s minimum wage to inflation beginning in 2019.

It faced significant opposition from business groups including the California Chamber of Commerce, who called it a “job killers” bill.

Labor and other activists had been pushing for a $15 per hour minimum wage for Sacramento and Davis, although efforts in Davis two years ago ended up stalling with opposition from business interests.