One of the biggest questions about the proposed Trackside project, which currently is planned at five and a half stories where the highest point of the project would be at 78 feet above the street, is how that height will impact the existing residents in the adjacent neighborhood.

Trackside Center is a proposal that would redevelop the southwest corner of the city block bounded by 3rd/4th Streets and California Northern Railroad’s short-line railroad (RR) and I Street. The quarter-acre property, according to the developers, represents “one of the largest infill opportunities in the Core Area of Davis.”

It is currently an underutilized site, with two commercial buildings, each one story, that take up about half of the lot and the other half is private parking.

The neighbors, beginning in mid-June, complained to council about the lack of outreach from the developers. Since then, the two sides have met a number of times attempting to assess impacts and look at ways to mitigate those impacts.

The applicants contracted with the architectural and planning firm JZMK Partners to prepare a shadow study for the proposed redevelopment project at 901-919 Third Street in Davis. “The study was conducted to determine the extent to which shadows created by the new project would affect the overall shadow conditions within the surrounding area.”

In a written analysis prepared by the applicant, they note that the city lacks “established standards or guidelines for the production of a ‘Shadow Impact Analysis’ as requested of the Applicant.” However, they write, “The Applicant and Applicant’s Architects have endeavored to utilize best practices from other communities to create a high-quality product that is helpful to both professional City Staff and members of the public.”

The applicant further notes, “This study is incomplete due to the lack of LiDAR data for the City of Davis. LiDAR data is created by remote sensing technology that measures distance by illuminating targets with laser and analyzing the reflected light.”

The applicant notes that, at a meeting in August, the applicants and the Old East Davis Neighborhood Association met and this study was verbally described.

At a meeting in September, the applicant noted the scope of the study. “Trackside Center, LLC, proposes to create a computer-generated, 3D, sunrise-to-sunset model of shadows created by the proposed project onto the surrounding buildings and properties utilizing the 4 extreme dates of the solar calendar: Autumnal Equinox (09/23), Winter Solstice (12/22), Vernal Equinox (03/20), Summer Solstice (06/21).”

However, an email from Rhonda Reed, President of the OEDNA (Old East Davis Neighborhood Association), noted, “Following the meeting, Alan [Miller], Mark [Grote], and I did share with the neighbors that you had asked for input to your studies for your required studies. They indicated to us that, as we shared with you, they were not interested in investing time ‘refining’ studies for a project that the neighborhood does not support.”

The applicants have proceeded to use a computer-generated 3-dimensional model of the area produced by the project architect, JZMK Partners. They examine four times of the year: June 21, December 21, March 21, and September 21.

In in their findings, they note that for all dates, “the most significant shadow effect occurs in the early morning and late afternoon, as expected, when the sun is lowest in the sky and shadows are lengthiest. Shadow coverage diminishes as the sun reaches its peak position, and begins to lengthen again in the afternoon.” 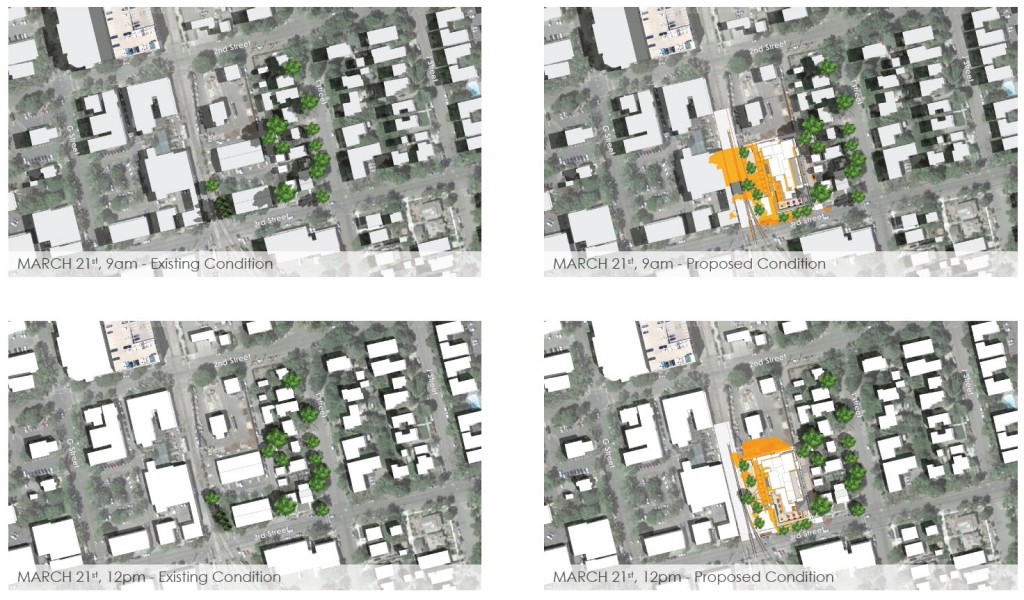 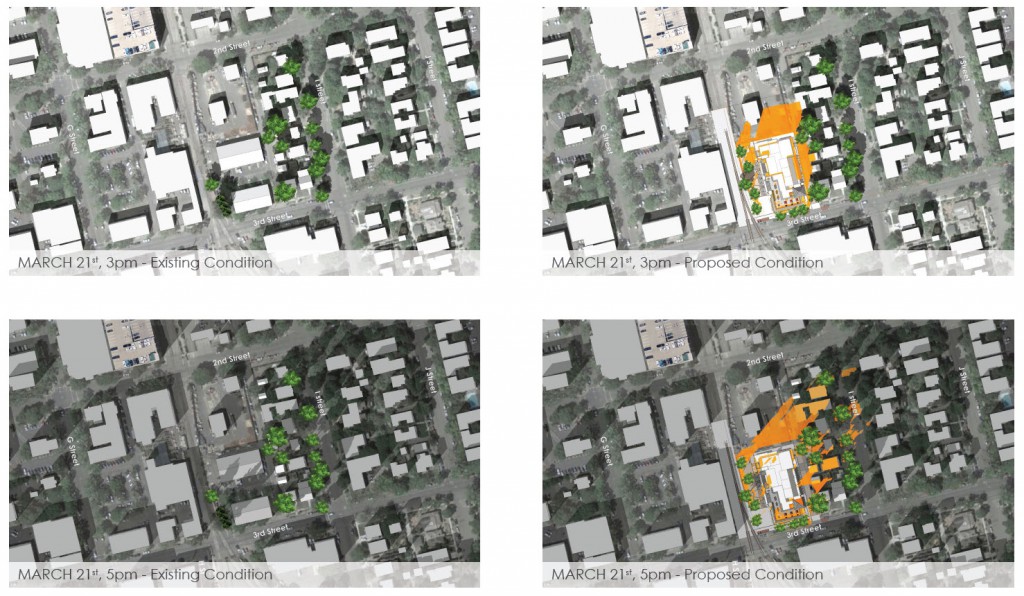 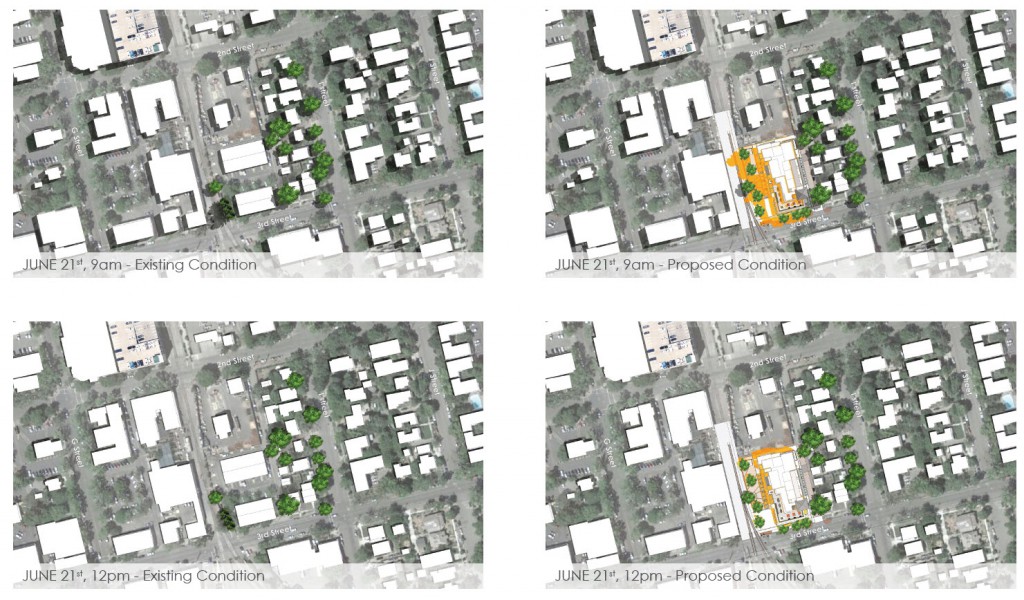 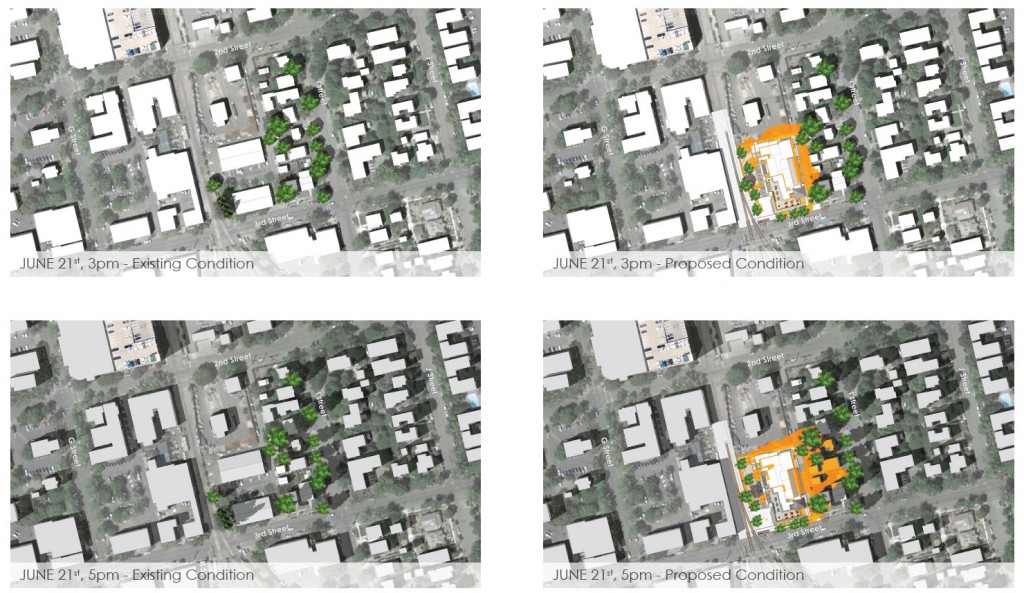 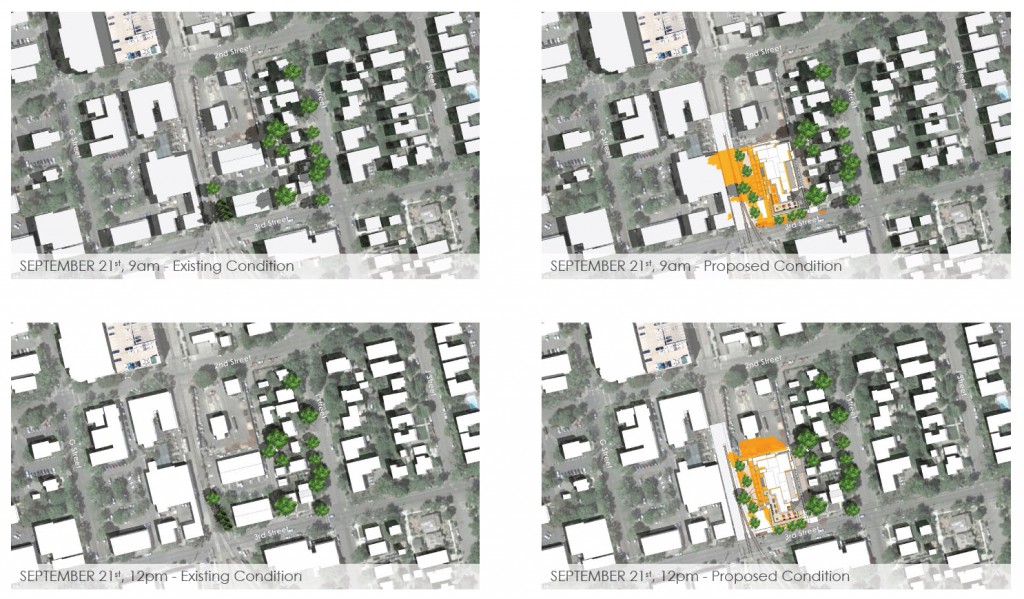 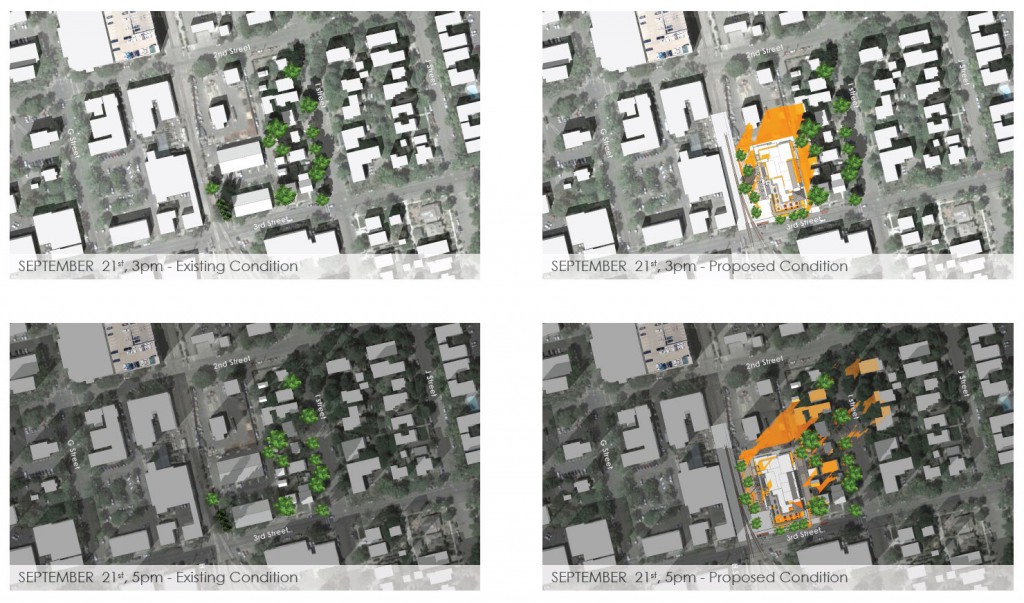 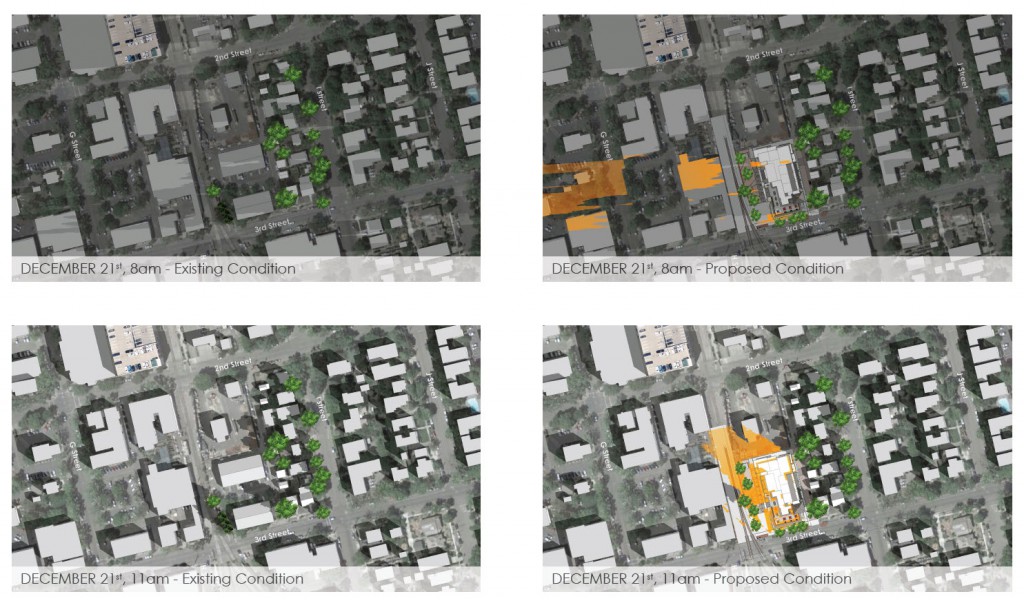 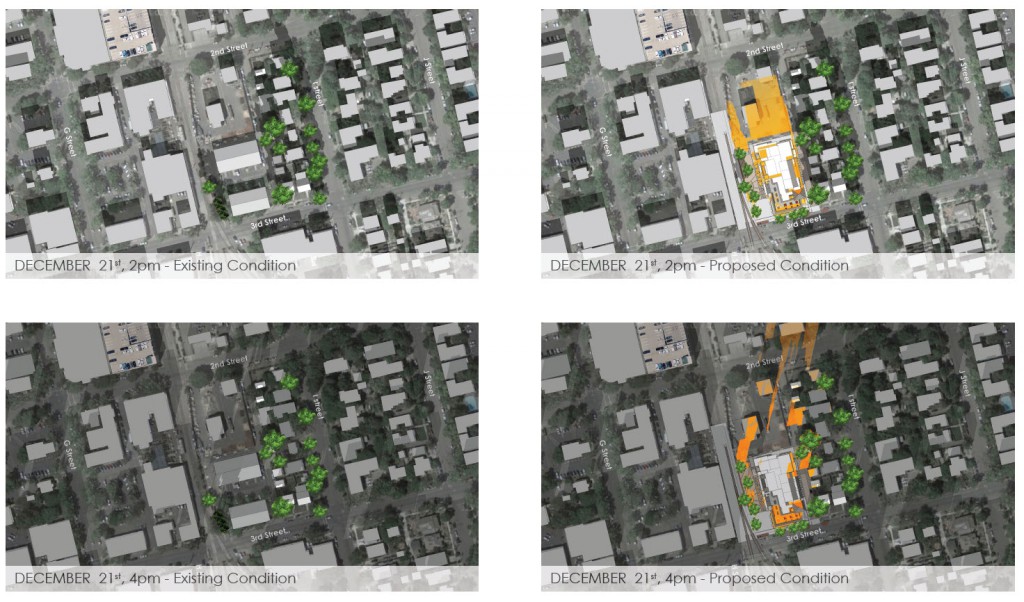 They summarize the findings: “While the proposed project will cast some additional shadow, particularly in the late afternoon, much of this impact will be mitigated by the shadow mass of the existing context, including many mature trees not included in the simulation.

“The location of the site on a corner lot with a 30’ alley located to the east, a railroad to the west, and a rock yard to the north also results in a significant portion of the new shadow falling onto roadway and inaccessible rail property, rather than neighboring buildings. Shadows are in constant motion, and any resulting impact of shadows on specific buildings is of limited duration.

“If the project is built as proposed, only a handful of surrounding buildings will be affected by new shadow and, in most instances, for only a short period of time. It is important to recognize that the shadow conditions depicted in the computer-generated illustrations make no allowance for cloud cover or overcast skies, which occur randomly, but with the greatest frequency and duration in the late fall, and in winter. These factors can only have the effect of reducing the actual (and perceived) shadow gain.”

These findings gibe with our own observations from walking around the neighborhood as well as taking photographs of the immediate neighbors. What was clear was that the immediate impact of the development would most acutely be felt by neighbors on the southwest corner of I Street, immediately abutting Third Street.