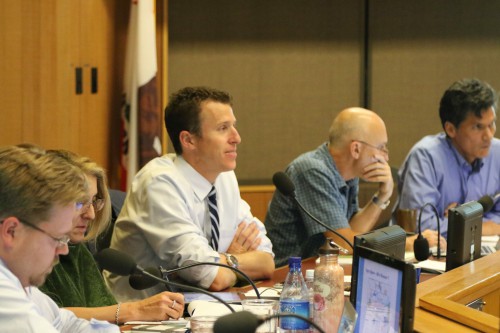 Many were stunned to see Mayor Dan Wolk bail on his signature issue just two weeks after a coalition that included his mother, Senator Lois Wolk, along with Dr. Harold Goldstein, former Assemblymember Helen Thomson and former Mayor Ann Evans brought the issue to the city council.

On December 1 during public comment, Senator Lois Wolk, speaking for the first time at a city council meeting where her son was presiding as mayor, said, “I support your consideration of this issue.” She noted that for the last four years, “we have tried to deal with this issue of either taxing sugary beverages or putting labels on these beverages. We have not been successful in getting out of either the Assembly Health Committee or sometimes the Senate Health Committee.”

Senator Wolk continued, “I think it’s time for people to have their say.” She added that these considerations offer a real opportunity for the city of Davis – for the children and the public health of Davis.

While she clearly stopped short of endorsing the soda tax, she made it clear the need to put the matter on the ballot to allow the people to have their say.

For his part, the mayor told me two days later, “I’m working on the soda tax. Like the idea.”

Two weeks later, Mayor Wolk attempted to use his prerogative as mayor to jump ahead of his colleagues in an effort to frame the message. The effort by the mayor to do this is not only highly unusual for any mayor, but particularly for this mayor, who has often seemed disengaged on the issues and has rarely weighed in on substantial matters in recent weeks.

On Tuesday, Mayor Wolk pushed away from the soda tax and back toward the need for revenue measures to address infrastructure.

But is it anymore? It was a year ago last November that the mayor rolled out a series of initiatives to promote healthier eating options for kids, including the healthy beverage choices for children at local restaurants that was approved by council to make healthier beverages the default choice.

He told the Enterprise last year, “I’ve always had a concern for the next generation. I have two young kids myself.”

While the healthy beverages initiative earned some notoriety and scorn, the soda tax would actually have some teeth, as evidenced by the sudden notice CalBev (the non-alcoholic beverage industry throughout California) and others in the beverage industry took of Davis.

Dr. Harold Goldstein told the Vanguard on Friday that CalBev is already in Davis, simply based on two paragraphs in the local paper, and he expected them to spend $2 million against the soda tax in Davis.

Neil Ruud, a local activist in support of the measure, told the Vanguard, “We were told to expect the sugary beverage industry’s intimidation tactics early on in the process, but it always surprises me how much influence big money can have.”  He added, “It’s good to know that Davis is a community where grassroots support is really the most important thing.”

None of this was particularly surprising then. The surprise was that Mayor Wolk, one of the champions of children’s health initiatives – with a group of supporters from Senator Wolk to former Assemblymember Helen Thomson to former Mayor Ann Evans to former School Board member and current interim-director of First 5 Yolo Gina Daleiden backing the soda tax – would be the first to blink.

Mayor Wolk is locked in a battle, perhaps as a frontrunner, to replace Assemblymember Bill Dodd, whose endorsement he just announced on Wednesday, in the Assembly.

Based on that threat alone, Dan Wolk in just two weeks went from a supporter to someone trying to kill the soda tax in Davis.

Make no mistake, the soda tax had an uphill battle from the start, even without the intervention and deep pockets of the beverage industry. Many in the community have pushed back on the idea – arguing that it would have a detrimental impact on local business and that it misplaced the city’s priorities away from core needs like roads and toward lower priority issues.

As Kevin Wan, owner of Sophia’s, argued in an op-ed, “Whatever the outcome, Davis businesses and residents pay the price. The Davis City Council has set a goal to ‘undertake actions to recruit and retain businesses.’ Taxes that single out retailers for selling products consumers want are neither attractive to new businesses nor sustainable for existing ones.”

More small business people came out on Tuesday in opposition to the tax.

However, support and opposition to the tax is almost a side issue now. Wherever you come down on the specifics of the soda tax, the fact that the mayor would roll on such a strongly personally held issue does not bode well for his ability to stand up to the pressures of lobbyists in Sacramento.

As former California Assembly Speaker Jesse Unruh once said, “If you can’t eat their food, drink their booze, screw their women, take their money and then vote against them you’ve got no business being up here.”

In a Facebook post, Supervisor Matt Rexroad was pointed, calling the capitulation of Mayor Wolk “pathetic” and stating, “So while I agree with the Mayor of Davis…. can you appear more weak and lacking the courage of your convictions?” He added, “[B]elieve whatever you are going to believe just try to be slightly consistent.”

The Vanguard has been a supporter of the Children’s Health Initiative, and called a year ago for the city to consider a soda tax.

For the Vanguard, the statistics are alarming. Dr. Goldstein pointed out that a study between 1977 and 2001 looked into the issue and found that, in 2001, people on average were consuming 278 calories more per day than they were in 1977.

That doesn’t sound like a whole lot, but it is. It is estimated that, for every 3500 extra calories, a person gains one pound. At 278 extra calories a day, that means that, every two weeks or so, people are gaining one additional pound. Over the course of a year, that means the typical person could be adding up to 25 to 30 pounds.

Dr. Goldstein noted that the perception that people have to dramatically overeat to gain a lot of weight is false. Moreover, of those 278 calories, about 43 percent is coming from the consumption of beverages.

How attributable are these factors to sodas? Dr. Goldstein believes that the research shows that sweetened beverages are responsible for half of the problem and that we need to start addressing this epidemic by starting with the biggest culprit first.

Meanwhile, it was Mayor Pro Tem Robb Davis who was left to make the case for the soda tax.

“Each generation has its public health challenges,” Robb Davis stated.  “My generation, it was cigarettes and a tax on cigarettes was going to destroy small businesses,” he said, pointing to the audience.  “And it hasn’t and we’re healthier.”

Mayor Pro Tem Davis added, “It is causing the public health crisis of this generation.  That is our crisis, there is no other.  Some people are living with it, some of you are going to die from it, or your kids are.”

Unfortunately this week, the children of Davis have lost one more advocate to the beverage industry and to the real world of politics.

106 thoughts on “Commentary: Threat of Beverage Industry Enough to Roll the Mayor Off Soda Tax Proposal”