The Brennan Center For Justice released an update to their November analysis on crime, where they argue that “reports of rising crime nationwide are overblown and not supported by the available data.” Data from the 30 largest cities “show crime overall was roughly the same in 2015 as in 2014, and in fact is projected to decline by 5.5 percent, according to an analysis of crime trends from the Brennan Center for Justice.”

“The average person in a large urban area is safer walking on the street today than he or she would have been at almost any time in the past 30 years,” wrote Matthew Friedman, Nicole Fortier, and James Cullen in “Crime in 2015: A Preliminary Analysis.” “Although headlines suggesting a coming crime wave make good copy, a look at the available data shows there is no evidence to support this claim.”

But the crime rate is not the full story, because the 2015 murder rate is projected to be 14.6 percent higher than last year in the 30 largest cities, with 18 cities experiencing increases, and seven cities with decreases.

But the Brennan Center puts that murder rate in perspective, noting that even “with the 2015 increase, murder rates are roughly the same as they were in 2012. Since murder rates vary widely from year to year, one year’s increase is not evidence of a coming wave of violent crime.”

Moreover, it is a handful of cities that have seen sharp rises in the murder rates and just two of them, Baltimore and Washington, “account for almost 50 percent of the national increase in murders.”

The Brennan Center notes, “These serious increases seem to be localized, rather than part of a national pandemic, suggesting community conditions are a major factor.” 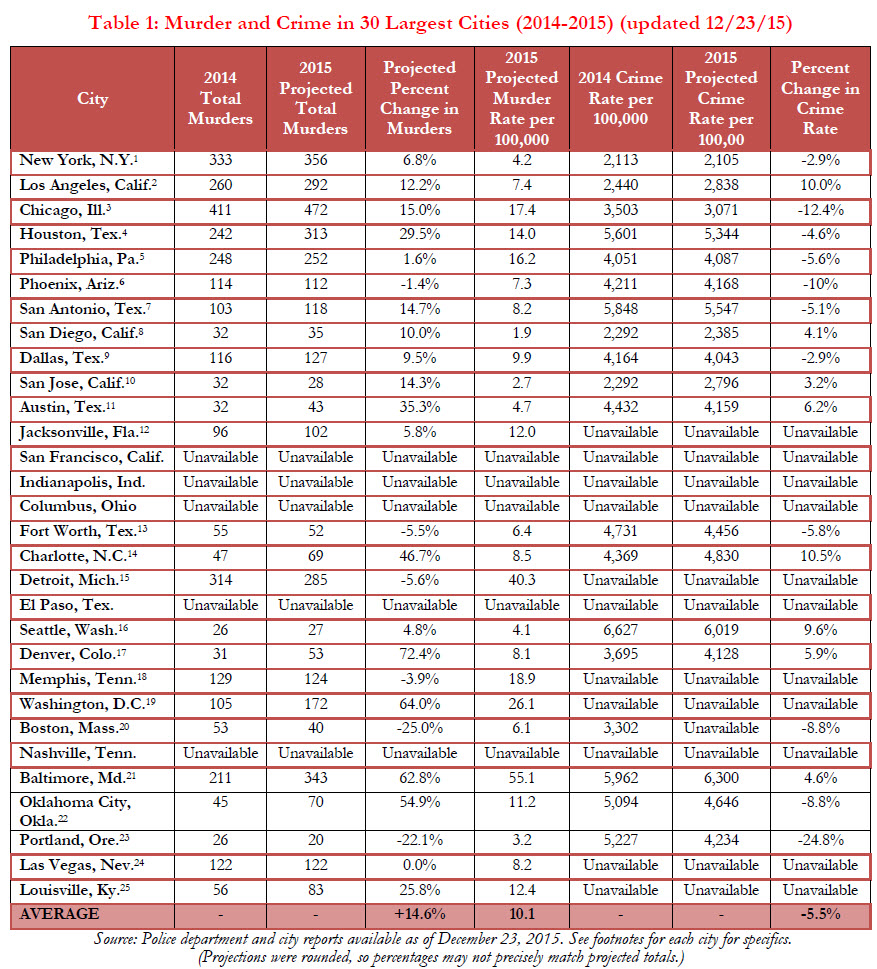 And while Baltimore and St. Louis have been tied to high-profile police incidents, the other three have not.

The report defines overall crime as “murder and non-negligent manslaughter, aggravated assault, robbery, burglary, larceny, and motor vehicle theft. The increase in the murder rate is insufficient to drive up the crime rate, and using murder as a proxy for crime overall is mistaken.”

They continue, “It is important to remember just how much crime has fallen in the last 25 years. The crime rate is now half of what it was in 1990, and almost a quarter (22 percent) less than it was at the turn of the century.”

“Baltimore, meanwhile, recently passed 300 murders for the year—a devastating milestone the city had not reached since 1999. According to the Baltimore Sun, the homicide rate in the city—which seems to have spiked in the immediate aftermath of Freddie Gray’s death at the hands of police in April—now stands at 48.97 per 100,000, higher than it’s ever been in the history of Baltimore.”

One of the questions will undoubtedly be what is contributing to the spike in murders in a handful of cities? However, as Slate noted, “It’s important not to misconstrue these numbers. They do not amount to a ‘national crime wave,’ as [Heather] Mac Donald and Sen. Ted Cruz claimed at this week’s Senate hearing.”

The analysis by the Brennan Center for Justice confirms this as well.

20 thoughts on “Final Crime Stats Show Crime Down, But Murder Rates Up in Major Cities”