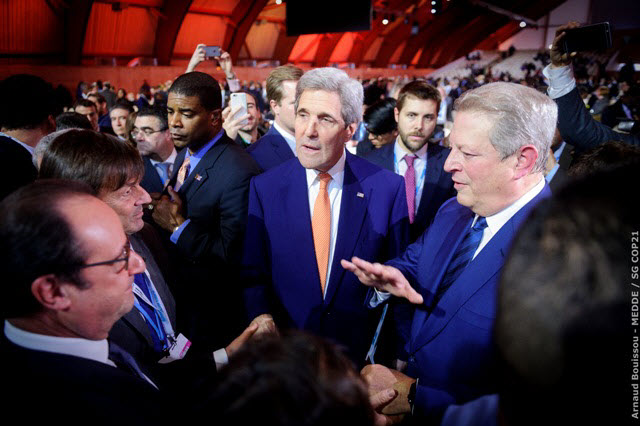 For over twenty years the myth of Sisyphus has been the ruling analogy of the global climate talks. The ball of past climate conferences has been consistently rolled uphill by diplomats and leaders from all countries only to have it roll back down again without a compromised text attached. Today Sisyphus can take a break because the ball is not rolling back down hill again but is maintaining its precarious position at the top of the hill…at least for now.

Today, December 12, 2015, a historical agreement was unanimously reached by representatives from 195 countries during a plenary session at the COP21 in Paris France. The agreement was presented to the representatives by the French COP21 Presidency, Laurent Fabius, amid strong emotions, peppered with applause and cheers just hours before the vote to accept it. The leaders of the world have finally come to the end of a road that lasted over 20 years and can now begin the journey along another road, that of implementation and accountability.

The compromise text is “fair, sustainable, dynamic, balanced and legally binding”, declared Laurent Fabius, in a trembling voice and on the verge of tears.   Fabius, who was applauded several times by delegates who rose from their seats, thanked them and standing with his hand on his heart stated, “This text, which we have built together, is the best balance possible, a balance which is both powerful and fragile, which will enable each delegation, each group of countries, to return home with their heads held high, having gained a lot,”.

The final draft included the pledge by all countries to halt global emissions at 1.5°c. This was more ambitious than the original goal of 2.0°c and is a “win” for countries already suffering from the damaging effects of the climate crisis, including rising sea levels, severe droughts and extreme storms that lead to food insecurity and homelessness. 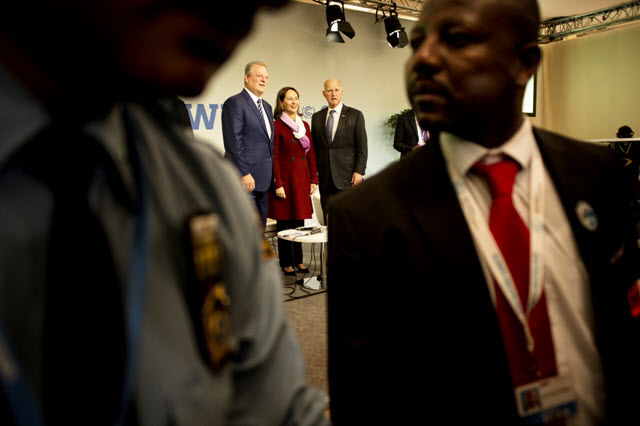 The Paris Climate Action Talks began on November 30 with all diplomats combing over a first draft of the agreement that showed 361 sections in brackets denoting disagreement.   The second draft of the agreement was submitted on Wednesday, December 10 and was showing 50 sections in brackets denoting disagreement. Like the melting glaciers and the rising seas, the progress was slow and the deadlines for completion were stretched to the last available moment in time. There were many discussions, both public and private from heads of State to environmental activists. The major sticking points included the differentiation of rich versus poor countries, the wording of an overall goal, and oversight in the future.

Amid a conglomeration of delegates from virtually every country in the world the United States delegation consisted of; President Barak Obama, Secretary of State John Kerry, California Governor Jerry Brown, Todd Stern , the Obama administration’s special envoy for climate change, along with Al Gore, Arnold Schwarzenegger and a huge number of NGO’s and private citizens.

The major objective in the agreement for all countries to achieve is for global emissions to be under 2.0°c with a preference for 1.5°c above pre-industrial levels; the latter is in line with science. Countries were also presented with a system to review and strengthen the commitments made at the conference and there were mechanisms developed to ensure that countries not only fulfill their commitments but to also provide aid to help the poorer countries convert their economies to cleaner energy sources and to assist them with coping with current and future affects of the climate crisis. Many of the richer nations pledged to give substantial amounts of funding with the US pledging at least $800 million by the year 2020. While this assistance is not guaranteed the document does recognize demands for loss and damage compensation but included a clause excluding any liability claims. This was one of the sticking points that the delegates had to overcome and at the urging of U.N. Secretary-General Ban Ki-moon to, “not let the quest for perfection become the enemy of the public good.” This part of the agreement left the poorest nations shortchanged, for now. The original draft text included an earlier pledge by wealthy nations to offer $100 billion a year to help developing countries by 2020 which would have been increased by 2015. This could very well be the “stitch in time” for the wealthier countries, for future damages to poorer countries could end up costing the wealthy nations more money in the long run. This was one of the more disappointing sections of the agreement.

However, as President Obama stated, “What should give us hope, is the fact that our nations share a sense of urgency about this challenge and a growing realization that it is within our power to do something about it”. 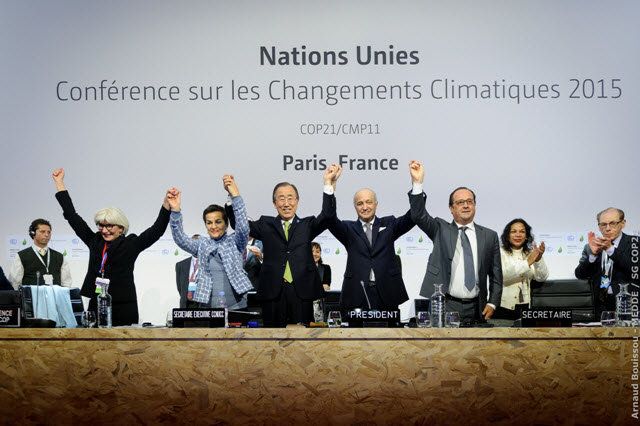 John Kerry noted in his closing speech at the conference that, “We are sending literally a critical message to the global marketplace. Many of us here know that it won’t be governments that actually make the decision or find the product, the new technology, the saving grace of this challenge. It will be the genius of the American spirit”.

It is that hope and that “American spirit”, after two decades of climate talks that will help to sustain people and motivate people to make positive changes in their energy choices, food choices and investment choices. It is these choices that will urge our leaders to stay on the right path and save us all from the devastating affects of the climate crisis.

As Bill McKibben the noted environmentalist said in an email to the Huffington Post: “This agreement won’t save the planet, not even close, but it’s possible that it saves the chance of saving the planet — if movements push even harder from here on out.”

One moving event at the conference were the letters written by French children presented to the delegates. A particular letter written by a young French girl held me in its grip of clear and honest concern. 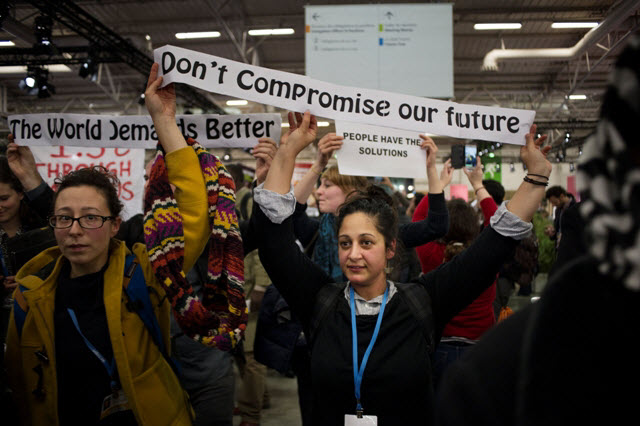 “Think of us children !

Our future is in your hands. Thank you to care.

What will become of us if you fail?

We understand that the situation is serious.

We have nightmares. It reassured us that you will succeed.

We are ready to change many things in our life, even if it is difficult.

Moreover , we have small ideas to offer.

But without you, it would be useless! We need you.