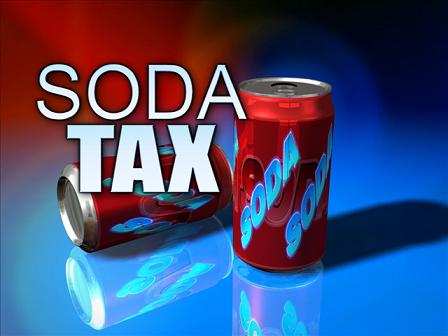 Last week we showed strong evidence that Mayor Dan Wolk had changed his tune on the soda tax, which went from being part of his agenda on children’s health issues to being a distraction from the city focusing on infrastructure needs.

But it turns out that Dan Wolk is not alone in changing his tune. Columnist Bob Dunning in his December 8 column notes that a soda tax could be on the ballot and makes reference to “the local Food Police.”

He writes, “Education is one thing, but apparently if it’s combined with punishment, it’s much more effective.”

But then he adds, “Still, given that we don’t have a dog in this fight and perhaps there’s a chance the city will use that $2 million windfall to add a few much-needed crosswalks in the neighborhood to help our kids get safely to school, we might end up selfishly voting for this tax after all. What the heck, I might even campaign for it.”

Ten days later, he is making mocking and mean-spirited reference to Tia Will. He references her comment “I am a Coke addict,” but actually misquotes her because she actually stated, “I am a recovering Coke addict.”

The next part of his column states that “given that proponents keep talking about how much cash the soda tax will generate each year, it’s clear this is more about revenue creation than public health.”

That is certainly not the gist of the comments I got from sitting down with Dr. Harold Goldstein.

Mr. Dunning writes, “Davis does not lack for recreational options for overweight children … there are plenty of activities, organized and otherwise, for kids to get out and exercise.” 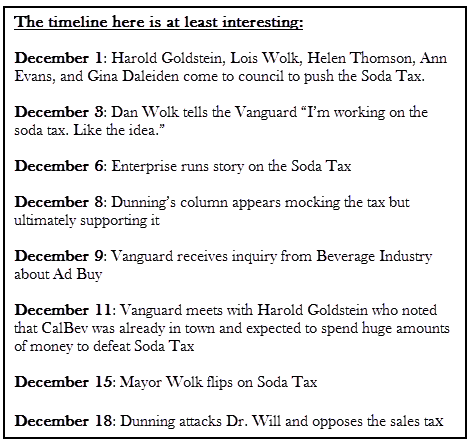 He concludes the section stating, “All the soda taxes in the world can’t take the place of parental responsibility and oversight … let’s face it, kids shouldn’t be drinking soda pop … but unless they get that message from their parents or guardians, a tax won’t be the cure-all its proponents claim it will be …”

Once again, Mr. Dunning seems to have a blind spot for the absolute epidemic of obesity and diabetes for low income children, whose parents may not have education to impart that level of responsibility and oversight.

But, more to the point, his position has clearly changed over the course of ten days from the point where he was mocking the idea but willing to support it – even campaign for it, if it ended up going to “much-needed crosswalks in the neighborhood to help our kids get safely to school.”

One of the questions that I think we have to start asking is about the proliferation of money. We want to believe that people take up positions based on honest differences of opinion rather than because they were paid to say what they did.

On the other hand, as one person pointed out to the Vanguard, if they can spend $100,000 now instead of $2 million during a soda tax campaign, why wouldn’t they try to do that? Both the Vanguard and the Enterprise are running paid ads from the beverage industry. Nothing wrong with that.

But when we start hearing that the beverage industry may have caused the mayor to flip from his signature issue based on the threat that they would fund his opposition in his assembly election, we start to get concerned about the influence of money here.

This is certainly a situation that bears watching.