On Tuesday November 22, 2015, the Davis Food Co-op Board of Directions unanimously voted to end the contract with Tony Mohsenzadegan, who was hired to serve as General Manager in June of this year. This marks the second time in two years that the board has terminated the contract of its GM. In February 2014, the board voted to terminate the contract of longtime GM, Eric Stromberg.

A group calling themselves Help the Co-op has organized to remove the current board of directors and have a petition for members in good standing to sign.

It is important for readers to understand that personnel laws prevent the board from explaining publicly their rationale for the decision and to remember that there may well be two sides to the story.

The Vanguard posts the following communications for the purpose of community information and discussion.

December 2 – Co-Op Board letter to membership 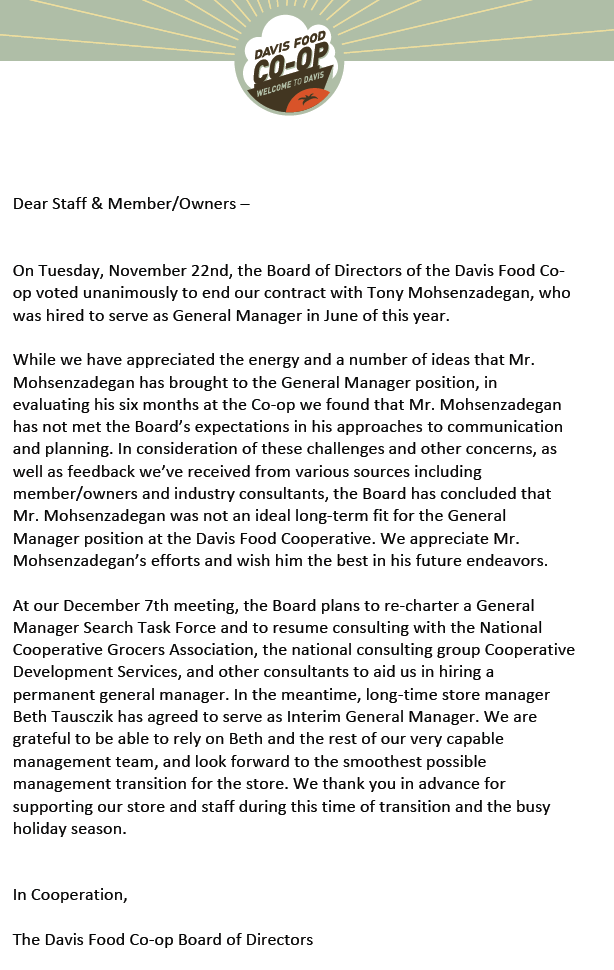 Letter from Help the Co-Op

What we know so far: On Tuesday, December 2, the Board fired General Manager Tony Mohsenzadegan. The Board’s letter says “Mr. Mohsenzadegan has not met the Board’s expectations in his approaches to communication and planning.” Segments of the Board have now met twice with Staff, but we still haven’t heard any concrete reason for their action other than Tony being too hard to work with.

This is the second General Manager fired by the Board in two years. Since GMs are contract employees, each termination means a payout under the contract. The Board ran a national search to replace GM Eric Stromberg right up to the point where we held all-staff meetings to interview the finalists, then did not like the results and ran a second national search to hire Mr. Mohsenzadegan, at a cost in excess of $30,000. While the details of payouts to GMs are confidential, our estimate for the total cost is in excess of $200,000. Since the Board now proposes to launch another search, that number will increase.

Meanwhile, the Board has failed to carry out other, critical, duties including producing Amended and Restated Bylaws that are desperately needed, or addressing issues which leave the Co-op open to significant liability. They have placed an item regarding “Board Compensation” on the agenda for the December 7 Board Meeting, although our boards have always been volunteer up until now.

As Member Owners, we reluctantly have to believe that the current Board is simply not fit to serve, let alone to select our next General Manager. We request that the entire current Board resign in favor of a Caretaker Board that will commit to rebuilding our Co-op before it’s too late.

December 8 – Response from Co-Op Board 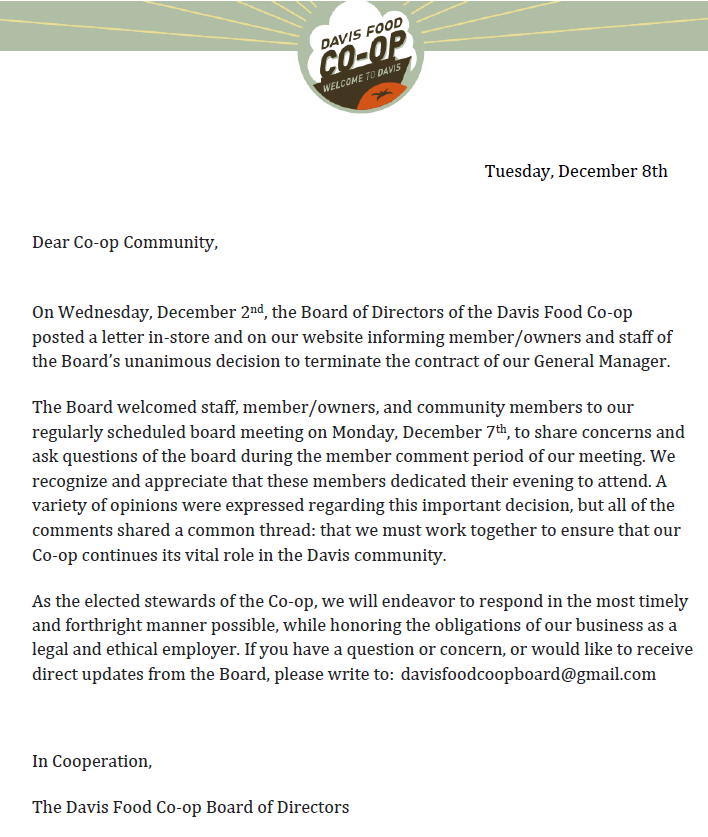 Share:
Tags:Davis Food Co-op
Previous : Commentary: A Few Bad Apples, Or An Entire System In Need of Overhaul?
Next : Commentary: Will MOU Fallout Impact Other Issues?

69 thoughts on “Termination of Co-op GM Contract Leads to Questions, Calls to Remove Board”