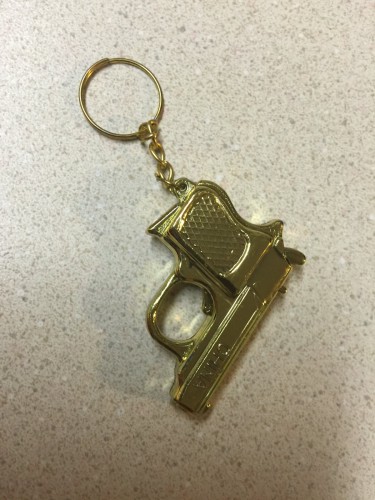 Yesterday I took my daughter to lunch over at Lamppost Pizza. She likes to get the little trinkets in the quarter vending machines and so I gave her $1, thinking little of it. She came back with a tiny gun on a keychain.

When I was growing up, my parents never let us have toy guns. Guns are not toys, we would learn from an early age. Lately I have been thinking more about that lesson, particularly in light of the tragic killing of Tamir Rice by police.

My daughter didn’t understand why she couldn’t have the gun keychain, even after I explained to her that guns were not toys. However, she was happy to let me have it in exchange for a second dollar.

On Thursday, the New York Times ran an article, “Tamir Rice and the Color of Fear.” Like many, I believe that had Tamir Rice been white, living in a middle class neighborhood or suburb, the police would have hesitated before opening fire on him.

The Times article, written by Brit Bennett, a writer living in Los Angeles, notes that the two officers “were cleared of any criminal wrongdoing for killing Tamir Rice, a 12-year-old who had been playing in a Cleveland park with a toy gun.”

As she noted, the 911 caller reported that Tamir Rice was “waving the gun at people,” but qualified it that Tamir Rice was probably “a juvenile,” and the gun “probably fake.” This message was not relayed to the officers responding to the call and “surveillance footage shows Officer Timothy Loehmann hopping out of a skidding cruiser and shooting Rice twice before the car fully stops.”

What got me thinking was the next bit of discussion. Ms. Bennett writes, “At his news conference Monday, Cuyahoga County Prosecutor Timothy McGinty admitted that it was ‘likely’ that Rice was reaching for his waistband to show the officers that the toy gun was not real.

“If we put ourselves in the victim’s shoes, as prosecutors and detectives try to do, it is likely that Tamir — whose size made him look much older and who had been warned that his pellet gun might get him into trouble that day — either intended to hand it to the officers or to show them it wasn’t a real gun,” McGinty said. “But there was no way for the officers to know that, because they saw the events rapidly unfolding in front of them from a very different perspective.”

Ms. Bennett then writes, “McGinty cast himself as empathetic by trotting out his attempt to put himself in Rice’s shoes. But he didn’t empathize, not really. He barely attempted to understand Rice’s intentions before he qualified the boy’s killing, both in terms of his large size and his failure to heed a warning that playing with the toy gun might be dangerous. Rice’s death was attributed to factors both outside and within the boy’s control: Of course the officers responded with deadly force — Rice looked like a man, not a child. And the boy was warned earlier to put the toy gun away — he should have known better. McGinty didn’t spend much time in Rice’s shoes because he didn’t need to. In a police-shooting case, the only perspective that matters is that of the officer who pulls the trigger.”

She adds, “In a report issued by McGinty’s office following the grand jury’s decision, he reiterates that the toy gun looked ‘just like the real thing.’ The problem is that Tamir Rice looked like the real thing too. He was a black boy who too closely resembled a black man, and that alone was enough to rob him of the benefit of the doubt. A toy gun in a black child’s hands becomes a real gun, the same way a wallet or a cellphone or car keys in the hands of a black adult transforms into a real gun. Black bodies morph into weapons, and the imagined danger becomes more powerful than fact. Again and again, juries find this reasonable.”

As I said earlier, I think the chances that the officers shoot a white kid in a middle class neighborhood are much less under the same circumstances, but this all got me thinking… Guns are not toys.

Tamir Rice was warned to put the toy gun away. It looked like a real gun. Maybe one of the lessons here is that guns are not toys. Therefore, toys should not be guns.

In California, the toy gun law requires an orange ring around the barrel to distinguish the toy guns from real weapons. Manufacturers are required by law to warn on their packaging that the modification of the guns may result in legal ramifications.

There are reasons for this and not just for the safety of the kids, but also because people have used toy guns to hold up convenient stores and rob people.

In this state, brandishing fake guns as real ones is punishable by a $100 fine for the first offense, $200 for the second offense and is considered a misdemeanor by the third offense.

Many states now require a broad orange stripe down the side to distinguish fake guns from real guns, but recently CNN had a story that online retailers in August reached a settlement with major online retailers who agreed to stop selling realistic-looking toy guns in New York state.

New York State Attorney General Eric Scheiderman said that, in the past 20 years, there have been 63 shootings linked to toy guns in the state, resulting in at least eight deaths. He said at that press conference that it was the 1998 death of a Brooklyn teenager, whose water gun was mistaken by police for a real weapon, that led to the ban on realistic toy weapons.

All of this leads one to wonder if we aren’t actually going far enough. Why do we need toy guns? Guns are not toys and toys should not be guns. Perhaps we are learning the wrong lesson here, a lesson that young Tamir Rice will not get to learn and his parents will have to live with forever.

But it is a lesson I hope my daughter will learn.  No one would mistake the gun keychain for anything, but the bigger point is guns are not toys – let our kids play with other things.

Share:
Tags:GunsPolice ShootingRaceTamir RiceToy Guns
Previous : Vanguard 10 on Davisville Radio
Next : Commentary: The Case That Should Be Made To the Public