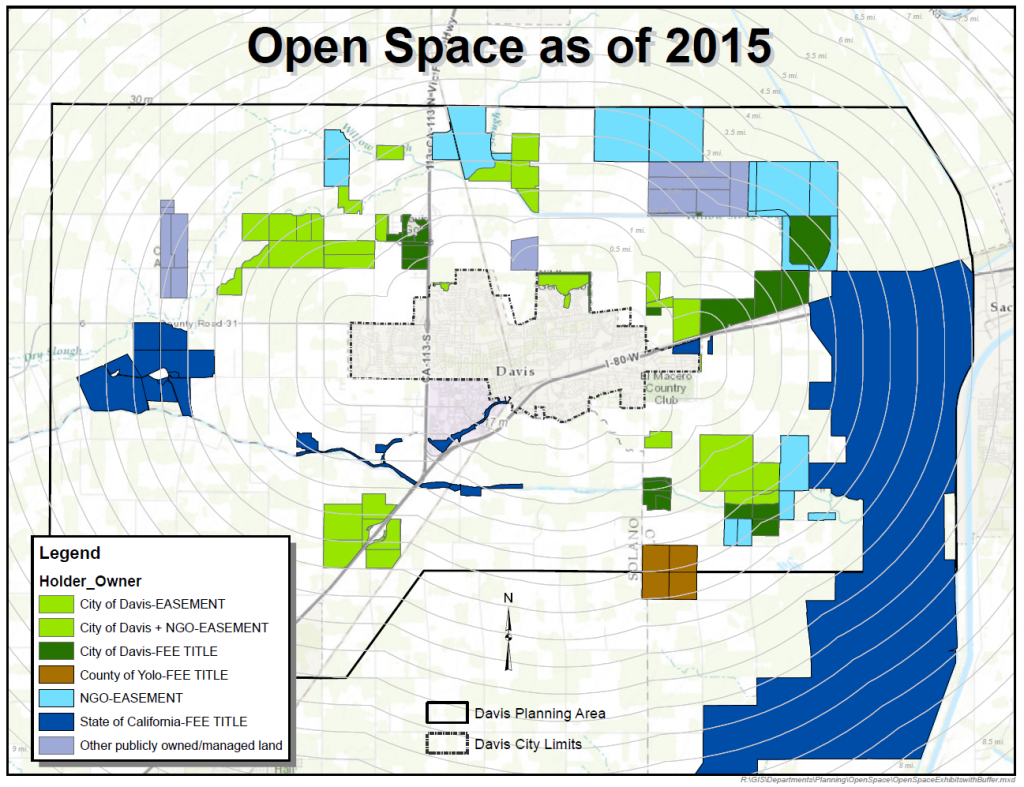 In 2007, led by Councilmember Lamar Heystek, the Davis City Council created an ordinance requiring 2:1 agricultural mitigation for all development projects on the Davis periphery under all circumstances. At the time, the council voted to exempt agricultural projects of less than 40 acres from adjacent mitigation requirements.

The idea behind mitigation is that any development along the periphery of Davis would require the developer to concurrently set aside twice as many acres to be protected and preserved as agricultural land.

As City Staffer Mitch Sears said at the time, the idea of adjacency is to address the outward expansion of the city so that larger tracts of farmland are protected. In a response to a question from Councilmember Don Saylor at the time, Mr. Sears explained, “The primary threat to farmland in the central valley is urban expansion.”

That ordinance took language from the Davis General Plan: “In order to create an effective permanent agricultural and open space buffer on the perimeter of the City… peruse amendments of the Farmland Preservation Ordinance to assure as a baseline standard that new peripheral development projects provide a minimum of 2:1 mitigation along the entire non-urbanized perimeter of the project.”

With some exceptions, the county provides that “for projects that convert prime farmland, a minimum of three (3) acres of agricultural land shall be preserved in the locations specified in subsection (d)(1) for each acre of agricultural land changed to a predominantly non-agricultural use or zoning classification (3:1 ratio).”

For projects that convert non-prime farmland, the 2:1 mitigation would remain in effect: “…a minimum of two (2) acres of agricultural land shall be preserved in the locations specified in subsection (d)(1) for each acre of land changed to a predominantly non-agricultural use or zoning classification (2:1) ratio.”

One exemption is for “[a]ffordable housing projects, where a majority of the units are affordable to very low or low income households.”

The city requires, “All new development projects adjacent to agricultural land that are subject to mitigation under this article shall be required to provide agricultural mitigation along the entire non-urbanized perimeter of the project. The required adjacent mitigation land shall be a minimum of one-quarter mile in width, as measured from the outer edge of the agricultural buffer…”

Why consider going to 3:1 mitigation?

First, it would create a more uniform policy with the county. At this point, almost all land that will be converted from agricultural use to urban use is county land that requires annexation. Under county rules, that land would need 3:1 mitigation if it is prime agricultural land. By implementing its own 3:1 requirements, the city would be creating a more uniform and coherent policy with the county.

Second, the notion of mitigation is not to prevent growth. Rather it sets forth a policy that any time the city grows, it creates a cap on the next step of urban explanation. The best way of maintaining urban encroachment is to preserve viable farmland.

Third, while some may see this as another anti-growth measure, an argument can be made that it might enable some limited expansion of urban uses. The public may be more willing to approve peripheral development if they know that they are locking in an urban limit line as they do so.

For instance, the Mace Ranch Innovation Center project proposes to convert 200 acres or so of farmland to urban uses. Under 3:1 mitigation, they would be required to set aside another 600 acres of farmland for permanent preservation.

Back in 2007, Councilmember Lamar Heystek argued, “We are situated in an agricultural landscape. I think it [this ordinance] makes votes under Measure J more of a balanced presentation. I think that some citizens may subconsciously support a Measure J decision knowing that we’re going to preserve more agricultural land in perpetuity than is being taken away.”

At that time, Mr. Heystek noted, “We will have the strongest agricultural mitigation ordinance and farmland protection ordinance in the state.”

However, the county has now surpassed the city in this regard. Ironically, expanding the open space protections of this ordinance may be a way of opening up some land for development, knowing that in so doing, we are protecting three times that land in perpetuity.

13 thoughts on “Analysis: Should the City Go to 3:1 Ag Mitigation?”