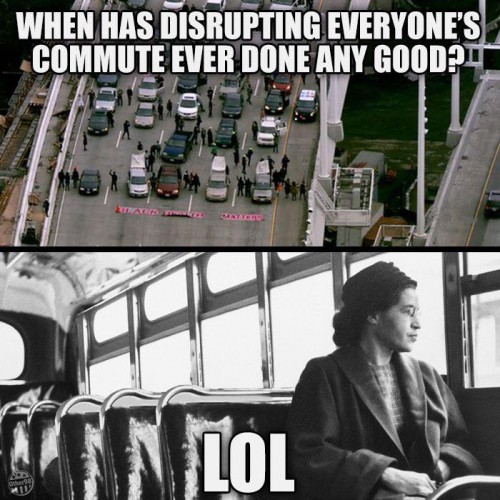 Yesterday, I saw someone had forwarded, presumably, a tweet that said, “This pisses me off… MLK would not shut down traffic.” This is of course absurd, MLK had done that and far more to disrupt the everyday lives of people and inconvenience everyone in order to make the point about injustice.

My view of disobedience is that it does not fall within the realm of rights. Rather, its very appearance and effectiveness is because it is an illegal act, an act that in order to have meaning must end in the arrest of the participants in order to show the injustice of the law itself.

Martin Luther King, Jr.,  said, “An individual who breaks a law that conscience tells him is unjust, and who willingly accepts the penalty of imprisonment in order to arouse the conscience of the community over its injustice, is in reality expressing the highest respect for the law.”

The key, however, is that the individual does not have the right to break the law and must accept willingly the punishment of imprisonment in order to arouse the conscience of the community.

Henry David Thoreau wrote in his essay on civil disobedience, “If the injustice is part of the necessary friction of the machine of government, let it go, let it go: perchance it will wear smooth–certainly the machine will wear out… but if it is of such a nature that it requires you to be the agent of injustice to another, then I say, break the law. Let your life be a counter-friction to stop the machine. What I have to do is to see, at any rate, that I do not lend myself to the wrong which I condemn.”

As I was reading that quote, I suddenly realized that the problems with the protests were not that they inconvenienced people. Thoreau writes, “Most men lead lives of quiet desperation and go to the grave with the song still in them.”

People need to be inconvenienced, in my view, or else they never can recognize the injustices of the world that they attempt to ignore in their lives. Instead, the problem is that the protesters blocking the Bay Bridge were not protesting traffic laws. There is a disconnect between the act itself and the protest that the people are standing up against.

On Monday, Davis MLK Day keynote speaker Natasha Minsker laid out this problem. She noted that today, when we engage in civil disobedience today, we march through the streets, we refuse to move, and the police may arrest us for the failure to disperse because we are blocking the street.

“That’s not what was happening in the civil rights movement,” she explained. “Rosa Parks was arrested for being a black person sitting in a place reserved for white people. Our criminal laws made it a crime to be black in places of white privilege.”

The Black Lives Matter movement has done some very important things in our political discourse. From Ferguson through the present, they have brought to the nation’s attention the need for police reform. No longer are unarmed black men gunned down by police without serious pushback.

As we pointed out on Monday, Hillary Clinton in the last debate was not afraid to make the comment, “There needs to be a concerted effort to address the systemic racism in our criminal justice system. And, that requires a very clear agenda for retraining police officers, looking at ways to end racial profiling, finding more ways to really bring the disparities that stalk our country into high relief.”

She would add, “So, we have a very serious problem that we can no longer ignore.”

These are words that you would not have expected to hear from Hillary Clinton, who has made a career out of playing things safe. Black Lives Matter has carved out a safe space for people like Ms. Clinton to speak out for injustice.

But this doesn’t go far enough. Instead of blocking traffic, Black Lives Matter has the ability to lead a revolution that would take down the system.

Bail reform is an issue we are going to focus on this year. In fact, it will be the subject of our annual dinner.

Natasha Minsker said on Monday that “it begins with bail.” She said, “If a person is arrested, then they can post money bail and then get out.” A wealthy white person can bail out of jail if arrested. They will go home, keep their job, they will remain with their family, hire an attorney and “get a better outcome.”

Someone who is in jail and can’t afford bail will stay in jail “and that person loses their job, loses their home, sometimes loses their family and they are under enormous pressure to take a deal and get out as soon as they can and try to restore what they can in their lives.”

She explained, “The entire criminal justice system is based on economic inequality from the very start.”

She said the scale of this problem is huge, enormous and overwhelming. “To achieve racial justice in this country we must fundamentally transform our criminal justice system.”

We don’t do that by blocking traffic. You want to change the bail system, demand that every single case has a bail hearing. That will bog down the system and force reform far quicker than blocking traffic.

You believe that blacks have been subjected to injustice in the criminal justice system, then take every single case to trial instead of copping pleas. That will force prosecutors to change how they charge each case.

The key, however, is not to simply disrupt traffic, which can draw attention to one’s cause, but not attack the instruments of injustice. Instead, we must attack the system itself at the points where it is most vulnerable.

Force the system to come to a halt due to its own weight, at the points where the system is most vulnerable and also the place where it is most unjust. “If the injustice is part of the necessary friction of the machine of government, let it go, let it go: perchance it will wear smooth–certainly the machine will wear out,” Thoreau said.

The Black Lives Matter movement, to be truly effective, needs to target these very parts of the system in order to bring about change.