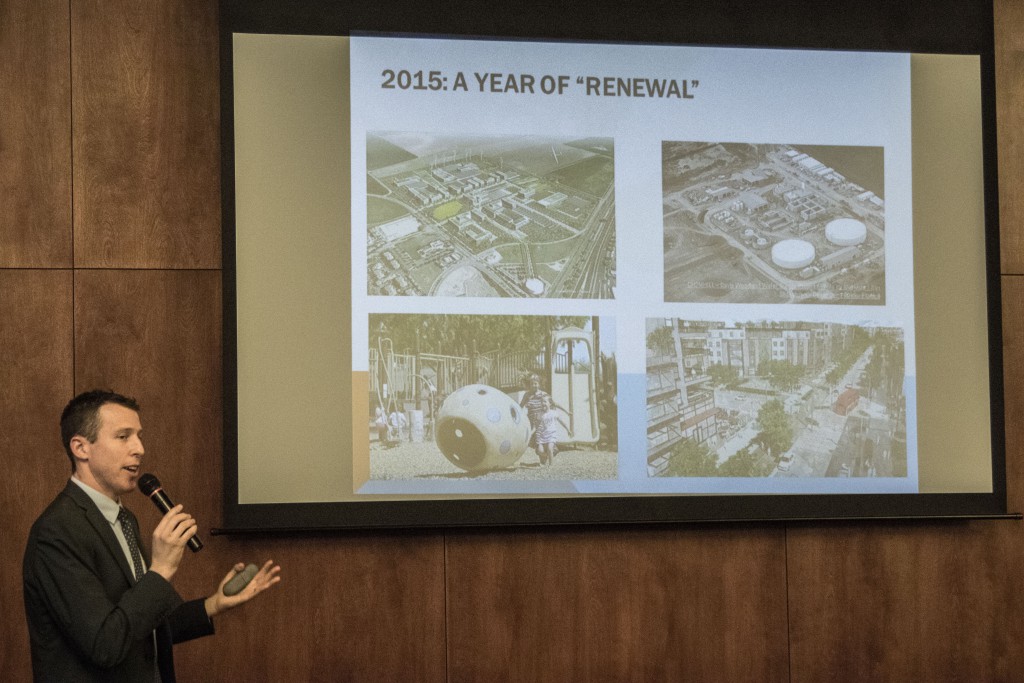 Many people view optimism in a descriptive manner. They assess it by looking at a glass of water and determining whether that glass is half full or half empty, as though someone who saw the glass as being half empty was the pessimist and those looking at the glass as half full are the optimists.

The reality is that those are semantics. Optimism is not about looking at a given situation and giving a static assessment, it is about assessing the situation and envisioning a way to a better future. Or to put it in the words of George Bernard Shaw, “You see things; and you say, ‘Why?’ But I dream things that never were; and I say, ‘Why not?’”

On Tuesday, in his concluding remarks, Mayor Dan Wolk stated, “The bottom line is that things are going very well for our city, we certainly have our challenges but we have a good council, a great staff and a great community and things are certainly happening.”

He added, “I never felt more optimistic about the direction of this city – it is a very exciting time to be in the city of Davis.”

In the last two weeks, we spent a good amount of time discussing the claims made by Mayor Wolk. Mayor Pro Tem Robb Davis would offer a different assessment of the city’s fiscal situation than the one that Mayor Wolk shared. As some have suggested, this could be considered a glass half-full/glass half-empty argument.

But I see it somewhat differently. While I agree with Mayor Pro Tem Robb Davis’ assessment more than Mayor Wolk’s assessment, the real problem I see is that Dan Wolk really has not laid out a vision for the future.

He says that while “things are going really well right now,” he also acknowledges “that’s not to say we don’t have challenges.”

For some it seems that acknowledgement lets him off the hook. But it doesn’t. The question is not one of assessing where we are, but rather where we need to go in the next year to achieve our goals. Last year the mayor laid out what he called “Renew Davis,” it was a vision, it was a call to action of sorts. This year, that vision seems to fall flat.

The reason that it fell flat is that the mayor never really lays the foundation for his agenda of renewal. I will focus on three examples – economic development, infrastructure and a sports park.

Mayor Dan Wolk said that he put forth last year the theme of “Renew Davis,” and he said that 2015 was really a year of renewal. “I think that it starts with economic development,” he said.

He noted that the John Meyer report urged the city to “double down on economic development,” and he called the hiring of Diane Parro as the new CIO to be a key piece of that.

But what is the call to action here? For many of us, we saw economic development, especially in the form of the innovation parks, as a way forward to a better future and a more sustainable economy. The city doesn’t generate the sales tax revenue of other communities – it wishes to avoid the peripheral retail development that could imperil its inner core and the downtown, and so we saw innovation parks as the way to capitalize on UC Davis’ investment into technology transfer and a way to generate revenue.

The problem is, if the message is “everything is awesome” and we have never been better, where is the energy going to come from to convince a public – that is primarily a bunch of slow-growthers who are reluctant to develop on the periphery – to change their point of view?

Without laying that foundation, it is difficult to see that the innovation park proposals are going to be successful. My view is that the prospects for passing a Measure R vote for an innovation park have greatly diminished in the past year.  It is not too late to regain that momentum, but it requires laying a more solid foundation than we have.

Mayor Wolk also pointed out that reinvestment in infrastructure was a key piece of renewing Davis. “If there’s one thing that’s really defined 2015 for our community it’s all the building that you’re seeing,” he said. “And boy did I hear it especially from Jamima (his wife) about the roads.”

“This council has really been dedicated toward reinvesting in our roads. We have seen the federal government and state government essentially pull back to zero in terms of their investments in our roads,” he said, noting that the legislature has failed to come up with a funding mechanism for roads, and so “we have really come to rely on funding our own roads.” He explained, “This council has put $4 million of our own funds… into the roads. We essentially have a $12 million two year program to improve our roads.”

This investment, he said, is paying off, as Bob Clarke a few weeks ago showed that the investment has reversed the decline of our PCI (Pavement Condition Index) on our main arterials and collector streets.

“That’s not to say we won’t have challenges and we certainly will have more challenges in the future,” he said. He noted they are exploring more revenue on infrastructure.

The mayor has the same problem here – they have $12 million, they have improved the main arterials, but he is vague on the challenge. The mayor does not – as Mayor Pro Tem Robb Davis did – lay out the fact that we actually have a substantial ongoing shortfall in the amount we are spending versus the amount that we need.

Finally, we have been discussing the sports park. While I have been a skeptic of trying to fund that expense, I think the mayor had an opportunity to lay out a strong case for why we need to upgrade our sports facilities. Again, he talked about the task force, but never laid the foundation for the need.

In short, we can argue about the extent to which everything is going great or is improving, or the extent to which our challenges are larger than the mayor is letting on. But the true measure of leadership here is not tooting our horns and patting ourselves in the back for where we are or the great community we live in, but rather to inspire the community in the next year to dig a little deeper so we can meet those challenges.

While I do not see eye to eye with the mayor on the former, the latter is where I see deficiency, not just in the mayor, but in much of the community right now. We lack a vision. In fact, we lack a foundation. Most people in the community think we are doing well and do not understand the depths of the fiscal challenges.

Earlier this week we debated whether we were in fiscal crisis, but to me the bigger question is whether we have a vision crisis – we have not laid out a vision, even a really modest one going forward, and to me that is the biggest challenge we face.

11 thoughts on “Commentary: Optimism Is About Laying Out a Vision To Meet Our Challenges”