Mayor Dan Wolk opened his remarks during the Davis Chamber’s State of the City Address citing Led Zeppelin, stating, “The Song Remains the Same” from last year. He said, “Things are going really well right now.” He allowed, “That’s not to say we don’t have challenges.”

Mayor Wolk said in his public address that things are going well, citing the J. Moore survey done by Mace Ranch which showed, among other things, that 67 percent of respondents felt that things were going in the right direction in the city of Davis, and that voters have a 56 percent favorable opinion of the Davis City Council versus 17 percent unfavorable and 27 percent with no opinion.

“Things are going pretty well,” he said. “We are of course coming out of the Great Recession in our community – which we were hit very hard by.”

He said that he put forth last year the theme of “Renew Davis,” and he said that 2015 was really a year of renewal. “I think that it starts with economic development,” he said. He highlighted Nishi and Mace Ranch Innovation Center as the major projects, and then some smaller projects.

Dan Wolk noted that the John Meyer report urged the city to “double down on economic development,” and he called the hiring of Diane Parro as the new CIO to be a key piece of that.

Mayor Wolk also pointed out that reinvestment in infrastructure was a key piece of renewing Davis. “If there’s one thing that’s really defined 2015 for our community it’s all the building that you’re seeing,” he said. “And boy did I hear it especially from Jamima (his wife) about the roads.”

“This council has really been dedicated toward reinvesting in our roads. We have seen the federal government and state government essentially pull back to zero in terms of their investments in our roads,” he said, noting that the legislature has failed to come up with a funding mechanism for roads, and so “we have really come to rely on funding our own roads.” He explained, “This council has put $4 million of our own funds… into the roads. We essentially have a $12 million two year program to improve our roads.”

This investment, he said, is paying off, as Bob Clarke a few weeks ago showed that the investment has reversed the decline of our PCI (Pavement Condition Index) on our main arterials and collector streets.

“That’s not to say we won’t have challenges and we certainly will have more challenges in the future,” he said. He noted they are exploring more revenue on infrastructure. 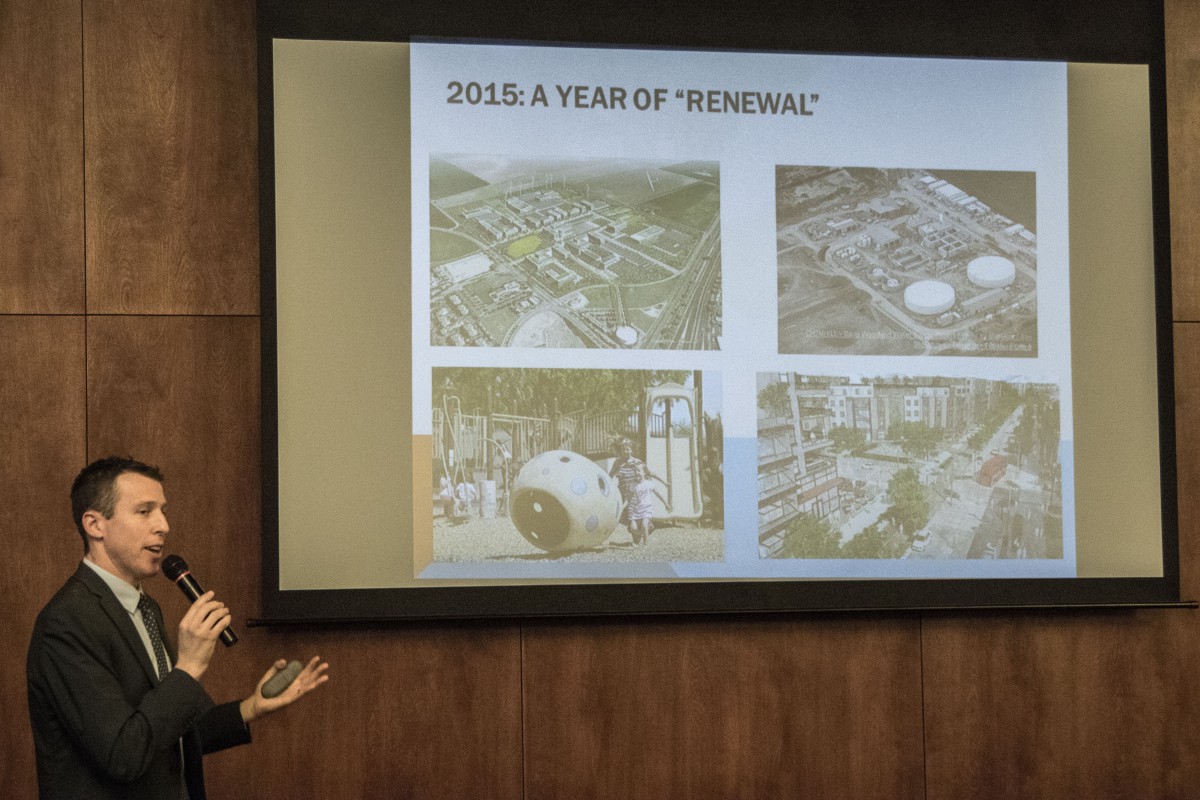 Mayor Wolk highlighted the improvement of the budget with the improved economy and the passage of Measure O. He said, “[There were] real sacrifices made by our employees as part of the negotiation process… including bringing the (cafeteria) cash out benefit from the 2000 (dollar) level to 500 (dollar) level.” He added, “We’ve been able to really produce a budget that is quite prudent and quite strong.”

The last budget, he said, Dirk Brazil called a “transitional budget.” “It pays what we need to be paying for retiree health and pensions. It’s providing $4 million for infrastructure and roads. It provides for a 15 percent reserve.” He said current projections have the reserve over 20 percent.

“The moral in the city was very low for a number of reasons, primarily because of the great recession and the cuts we had to take,” he said. “For a well-functioning city you need good people who are productive who like what they do, that’s really what has been really happening in 2015 and Dirk was a big part of that.”

He said they brought back the employee service awards, which he said is a small thing “but it was something that had gone away in the recessions and had gone away because of previous city managers.” He said it was a great time and “you could just feel in the room the excitement among our employees for the city. They believe in our vision and they love the city… I think that’s one of the things that Dirk has really brought to the city.”

Dan Wolk then said, “fasten your seat belts, I really think that’s what 2016 is going to be like.” “We have a lot of stuff that’s coming down our pike starting with the first city council meeting in January.”

He started with a discussion of Nishi which he believes will go on the ballot in June. “I think it’s an excellent project,” he said. “They’ve committed now to being at a minimum fiscally neutral.” He cited the EPS report and argued that Nishi along with Mace, using conservative estimates, “will bring in millions of dollars to the city in terms of revenue.” 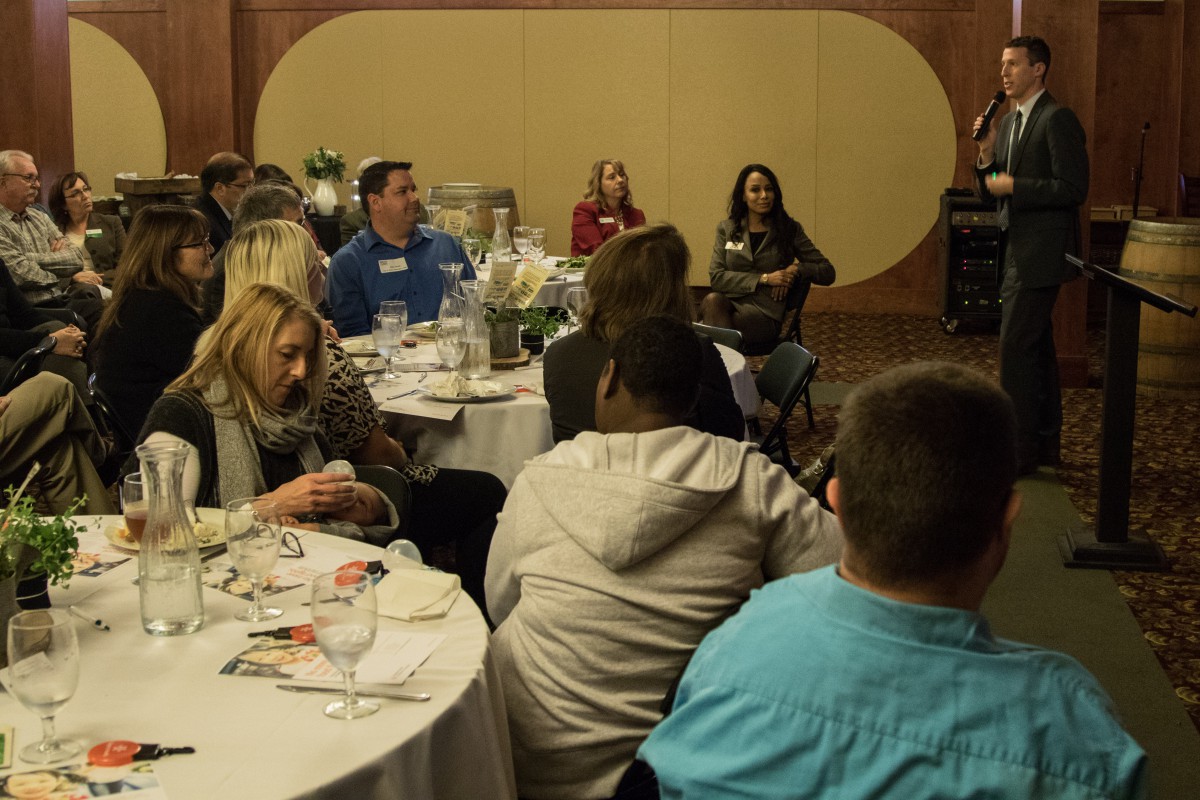 Dan Wolk then discussed the proposed housing at Mace Ranch Innovation Center. “The applicant has asked for a housing component. I totally understand why. If you look at the environmental effects of that, you see that it really reduces the vehicles miles traveled (VMT).”

He noted the jobs this project is going to create and asked, “Where are those people going to live? If you don’t have housing commensurate with that it could create a situation where folks are kind of coming in and creating traffic issues, pollution issues.”

Mayor Wolk added that, looking across the country, housing has been a key component of innovation parks. Council, he said will make that call and is looking to put it on the ballot for November 2016.

Mayor Wolk noted that the city will be continuing to work on infrastructure with staff coming back to council in a few months with a pavement plan for 2016. The focus, he said, would be more on “these local streets.”

He said that the council is unified in the understanding “that we have these (long term) infrastructure needs.” He acknowledged, “We have problems that can’t be addressed within our current budget… They’re just too expensive; we have to look at other funding sources.”

During the question period he was asked what happens when the sales tax measure expires. He said, “If you look at the numbers and those completely go away… our revenue drops off dramatically and it is a big concern.”

He said, “It is my hope that if we still need the revenue, the voters recognize that the revenue is critical and the voters are ready to re-up again for that revenue. That revenue has been absolutely critical to our city.”

Mayor Wolk said it was very difficult as a councilmember going through the recession, as “we had to make some very difficult (decisions).” The mayor cited the decision to close Community Pool as an example. He also noted that, through attrition and layoffs, the city lost a lot of good employees.

He said through Measure O they were able to turn this around and he hopes the voters will continue to support these efforts.

Mayor Wolk added, “With economic development, we really want to create a situation where the revenue is coming from the private sector coming into our coffers, not necessarily coming from tax revenues.”

He again said the EPS report was very conservative, but showed “millions in benefits, ongoing to the city.”

Mayor Wolk cited Dan Carson, a member of the Finance and Budget commission, who presented council “with a paper that showed that [the EPS report] really underestimated Nishi… He thinks that right now that the report had Nishi at a negative $78,000 per year, but he estimates that that’s a really low figure, that it’s probably much more positive into the millions.”

He noted that, for the revenue measures, the city needs to be transparent with the voters, showing them where the money is going and why.

“Will the council and will the community ultimately be comfortable adopting a proposal that has contingencies? And key conditions to it, or do they want to see something more solid?” he asked. He said they’ll have the dialogue but his hope is that the council and community will still lend its approval.

In his concluding remarks, Mayor Dan Wolk would reiterate, “The bottom line is that things are going very well for our city, we certainly have our challenges but we have a good council, a great staff and a great community and things are certainly happening.”

He added, “I never felt more optimistic about the direction of this city – it is a very exciting time to be in the city of Davis.”