A year ago, the City Council declared that it wanted to see innovation center projects that had low greenhouse gas emissions, minimized auto traffic, encouraged walking and bicycling, improved the jobs-housing balance, and maximized open space. One very important set of goals (called the Guiding Principles) said such projects must also provide significant fiscal benefits to the city if they were to be worthy of approval.

One line from a study by a city-hired economic consultant from last September has been invoked as proof that the Nishi Gateway project now before the City Council would be a financial loser for the city. Let me share with you my different perspective, based on my career as a nonpartisan state fiscal analyst and my work on the city Finance and Budget Commission.

My independent analysis finds that Nishi Gateway would achieve a significant direct net fiscal benefit to the city that, in the long term at build-out, could reach $2 million annually, with one-time benefits in the millions of dollars. Other local agencies, including the county and school district, would also cumulatively receive millions of dollars in additional revenues.

Since last summer, I have analyzed hundreds of pages of economic and fiscal consultant reports as well as the project EIR; asked many questions of city staff and consultants; and obtained information from various other sources, including the project applicant. My resulting analysis is available on the City of Davis web site in our commission’s January agenda packet.

My findings that the project would have a net positive impact on city coffers are consistent with what EPS has been saying from the start. EPS’s so-called baseline scenario projected a modest deficit, but their study further stated, over and over, that its projections were intentionally conservative and excluded a number of factors that turn it into a fiscal positive.

The project is evolving daily. Planning documents now allow conditional approval of a hotel onsite that could add transient occupancy, property and sales tax revenues. The applicant has agreed to compensate the city for property taxes losses if UC Davis and nonprofits rent office and research space there. Parks, open space, and certain public works would be supported privately, saving the city money. My numbers take these kinds of project changes into account.

I also made some different technical assumptions in my projections.

For example, EPS assumed that the project would generate sizeable fire service costs, basing their number on the average cost of providing fire services to Davis citizens and workers. As you can see on the nearby figure, EPS assumed it would cost the city $312,000 annually to protect 43 acres at Nishi, but the Fire Department gets about twice that much money annually to protect Nishi land — plus 32,000 acres more — in a local special fire district. 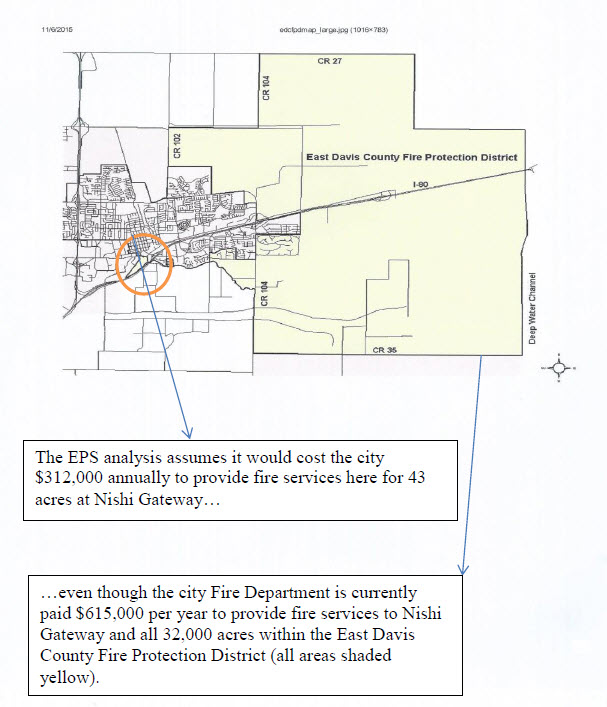 The Environmental Impact Reports for Nishi Gateway said that such an infill project could receive fire services with existing staffing and stations and that remaining costs could be offset with development impact fees. Accordingly, my analysis assumes much lower and more reasonable marginal costs for providing fire, and other city services, to Nishi Gateway.

I also counted one-time benefits to city finances that would result from the project, such as sales tax revenues that would be gained as 1,000 construction workers built the public infrastructure, housing, and office and research space. Also, under city law, $3 million in construction taxes plus development impact fees would also be collected. These kinds of revenues were not accounted in the EPS report, and they said so.

One important piece of the puzzle is still unresolved — a specific assessment of some sort to create positive ongoing revenue for the city as the Guiding Principles endorse. Recent project design changes and proposed school district levies could make streets and bridges and other public infrastructure needed for the project more expensive to finance, leaving less cash flow available for such citywide project benefits.

Fixes to the problem are already being worked on. School district officials are likely to be reasonable about their money demands; if the project doesn’t pencil out, they gain nothing. The chief of SACOG, our regional planning agency, says the project would be highly competitive for transportation grants it dispenses that would offset some mitigation costs. Project financing and infrastructure costs can be reduced and more revenues generated to pay for infrastructure – and citywide benefits — without undermining core project goals.

However, it is important that a development agreement be carefully written and vetted to ensure that Davis citizens get the full fiscal benefits that Nishi Gateway could and should bring, consistent with the Guiding Principles for such projects adopted by the council a year ago. This will be critical if the project is to pass in a Measure R vote this June.

Dan Carson worked for 17 years as a nonpartisan fiscal and policy adviser to the California Legislature, retiring in 2012 as deputy legislative analyst. He is vice chair of the city’s Finance and Budget Commission, but this commentary reflects his views only.  Originally published in the Davis Enterprise.