In general, the Vanguard has pushed for greater density at Nishi. The developer has, in fact, put in a contingency for 130 additional units. At the last council meeting, Robb Davis suggested that the additional units simply be included in the base project.

The problem with that is that the additional units have not been studied in the EIR (Environmental Impact Report). Because of that, staff wrote, “The Baseline Project Features also allow potential increase in residential units, or addition of a hotel, as a potential subsequent action by the City, but without a requirement for subsequent voter approval.”

Instead, both the additional housing and the hotel “would be subject to full environmental review as required under CEQA [California Environmental Quality Act] and City Council consideration of the necessary General Plan and planned development amendment.”

While not necessarily against the letter of the Measure J ordinance, it certainly would have invited both political criticism and potential legal challenges.

Mr. Ruff was not asked about the hotel on Saturday, but that may be coming off the table as well, the Vanguard has learned. The elimination of both the additional housing proposal and the hotel would eliminate two of the contingencies that seemed most problematic from a legal standpoint.

Critics will still have potential concerns on the phasing of construction, which would not be able to begin until the second crossing issue is approved by UC Davis and until the corridor plans are handled on Richards Boulevard.

The Finance and Budget Commission will look once again at the fiscal analysis of the site. The elimination of the hotel would take about half a million potentially away from the site. However, the Services Community Facilities District for municipal services will create a known revenue stream.

Writes staff, “The Baseline Project Features include establishment of a Services Community Facilities District for municipal services, to ensure positive fiscal and economic benefits for the City of Davis. Parameters for the Services CFD process will be established in the Development Agreement. Exact revenues and methodologies will be established by the City Council upon formation of the District in the future, with input from fiscal consultants and the Finance and Budget Commission.”

As staff explains, “A Services CFD is different from an infrastructure CFD, which has the purpose of financing bond debt to provide capital funds for construction of physical improvements related to a development project.”

A Services CFD provides “an ongoing revenue stream from payments that are made by property owners within the district and collected with the annual property tax bill. This provides a permanent source of funding for City operations to serve the project, in addition to property and sales taxes that would continue to be collected per statute.”

How much would that be? One source suggested about $300,000 in gross revenue. This would be in addition to sales and property taxes. While this would not seem sufficient to get the city to $1 million, it might get them to half a million. Is that going to be enough for those who want Nishi as a revenue generator? Stay tuned.

The city has developed a list of ongoing needs for infrastructure. Not surprisingly, roads represent about 78 percent of the identified needs. Parks represent about 11 percent, as do city buildings. 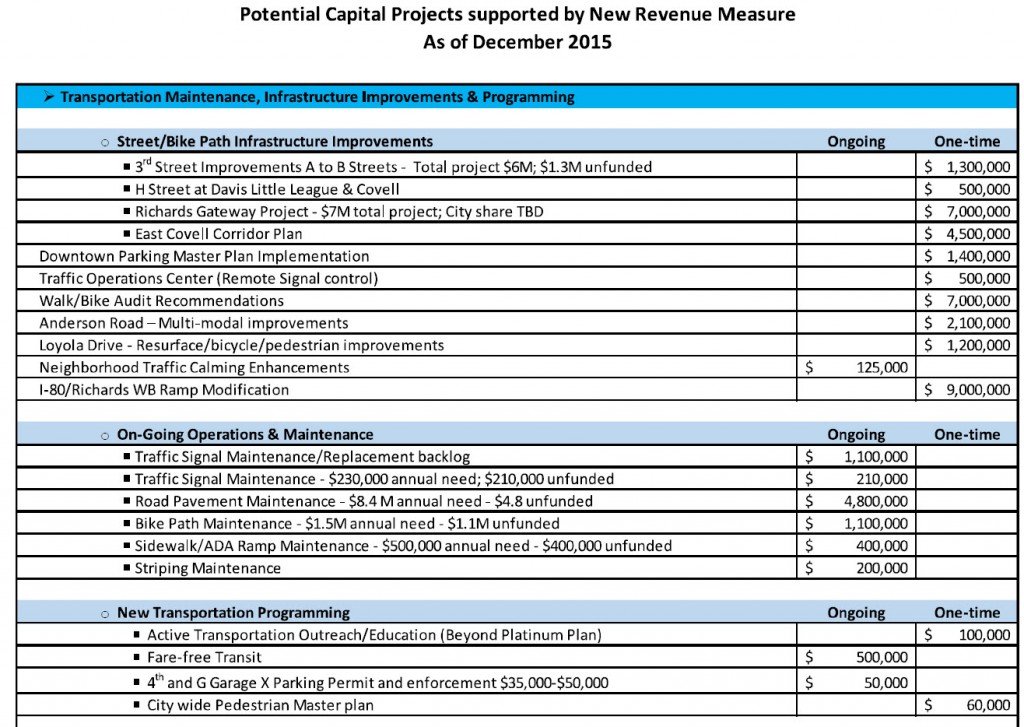 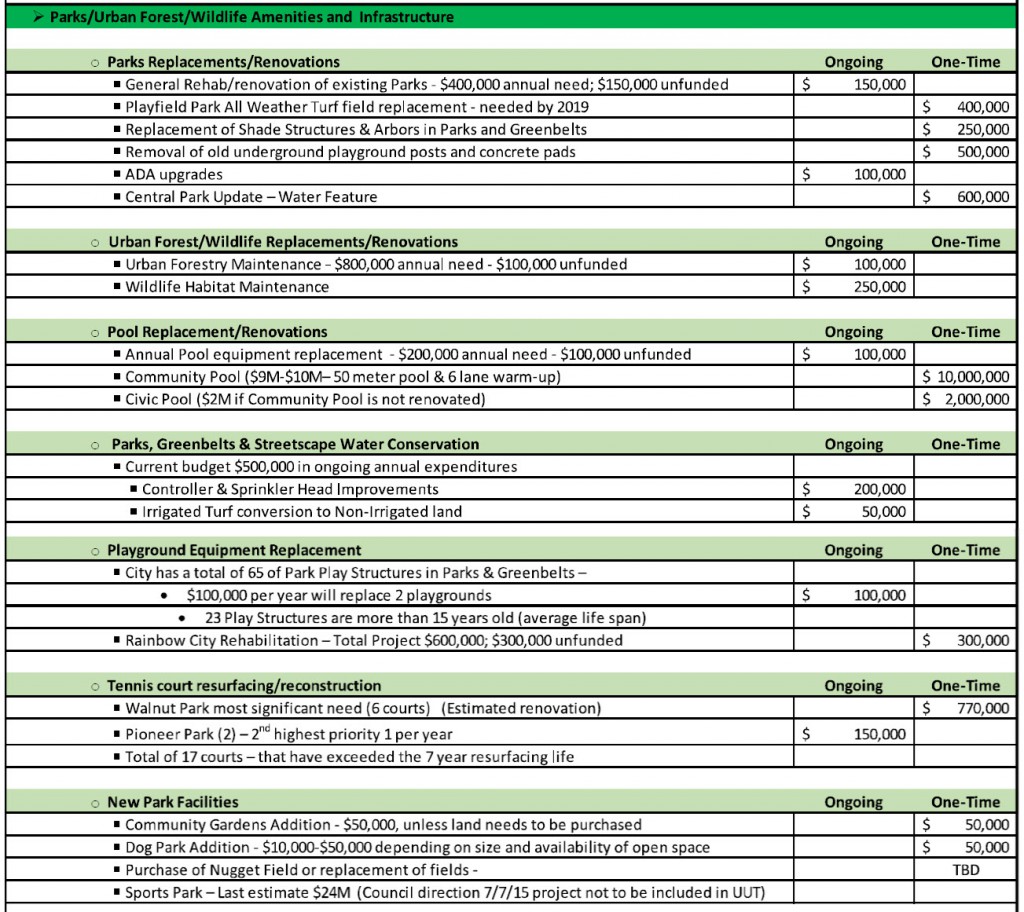 And yet, if we look at the projects supported by an infrastructure maintenance measure at $2.8 million per year for six years – which would be $100 per parcel tax, the breakdown is perplexing. 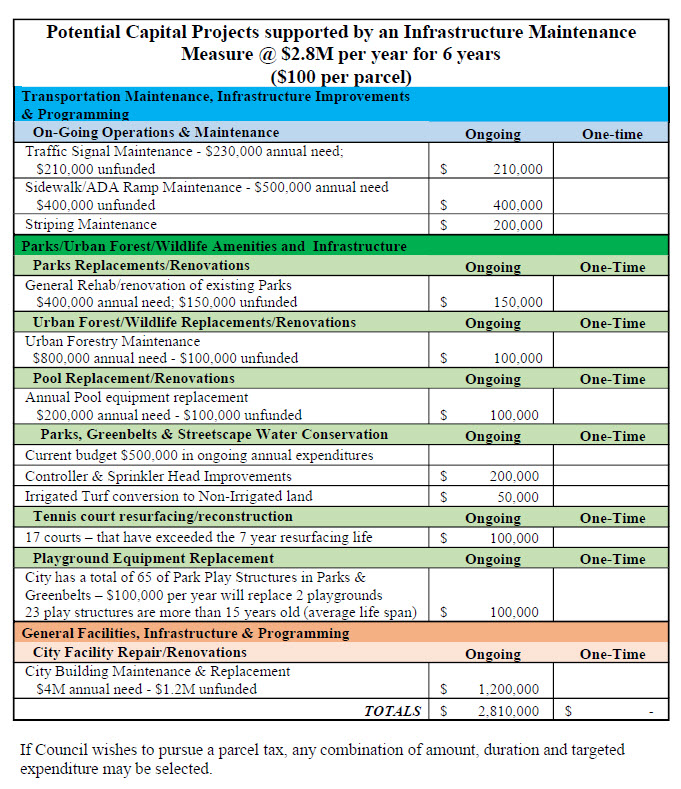 The question is why is staff so advantaging parks at the expense of roads, which represent the huge majority of all needs?

Granted, these are illustrative tables and staff notes, “If Council wishes to pursue a parcel tax, any combination of amount, duration and targeted expenditure may be selected.” But the illustration shows staff’s preference, which is not going for roads. Staff appears to be only adding about $1 million to roads needs currently funded at $4 million, but well short of where it needs to end up.