For those fearing that the changes to the AIM program would result in the exclusion of blacks and Latinos, those fears were resoundingly realized when the district released its agenda ahead of Thursday’s school board meeting.

The 3rd grade AIM identification for next year, implementing the elimination of private testing, the continued use of OLSAT (Otis-Lennon School Ability Test) with specific risk factors and testing apparatus for re-testing alone without even implementing the most controversial part of the reform, and the increased threshold for qualification scores, shows a dramatic drop in both the number of students identified as well as the number of Latinos and blacks. 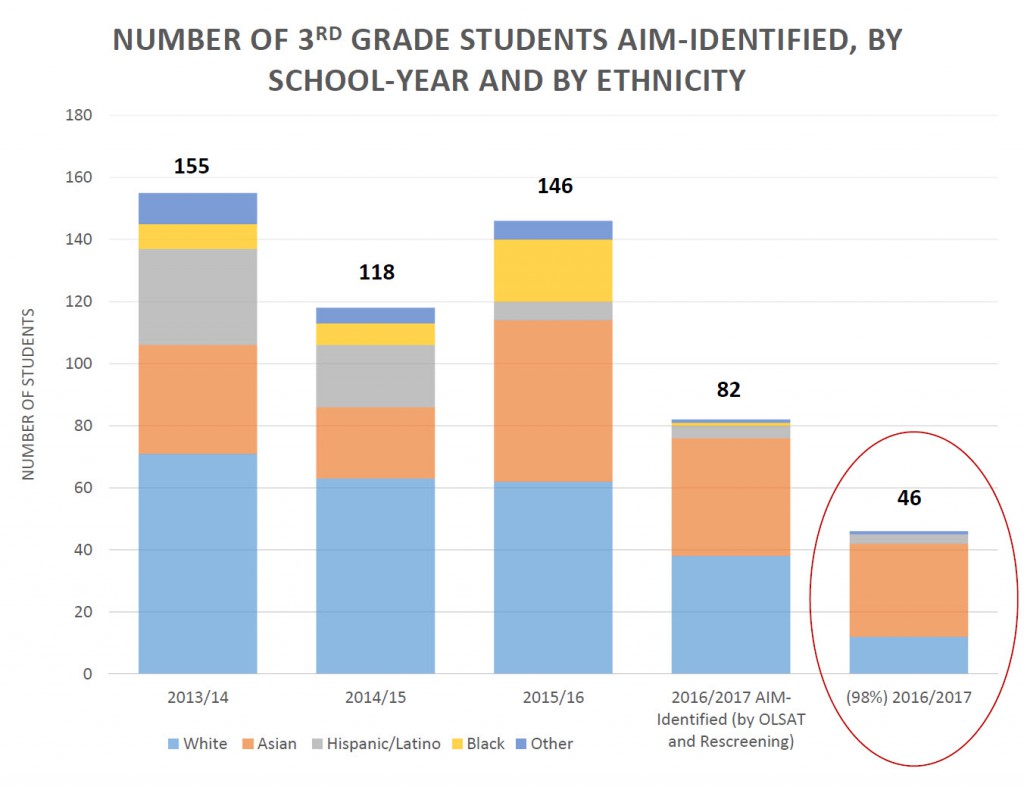 By the time the vote took place last fall, the bone of contention seemed to come down to one of the recommendations – the threshold for qualification. The board majority was pushing to increase the minimum qualification score to the 98th percentile. There was a suggestion that that be phased in. The phasing would allow the district to evaluate the numbers prior to the next year’s change.

If those pushing for reform were trying to dramatically shrink the program – they succeeded wildly. As we note, the program this year will drop from 146 to 82 students. However, that is even before the new threshold is implemented. With the new threshold, that number would have dropped to just 46 students – including three Latinos and zero blacks.

That is even more dramatic than we projected. We believed that the increased qualification score would put the self-contained program somewhere between 63 and 73 students , rather than 46.

My biggest concern, following the November vote with the changes in the AIM program, is the extent to which a smaller program allows for equal access along racial and ethnic lines. From a statistical standpoint, a smaller program makes it more difficult to achieve the diversity that roughly reflects the demographics of the district.

In voting to pass the motion to move the qualification score from the 96th percentile this year to the 98th percentile next year, Madhavi Sunday said, “I am prepared to support the Superintendent’s recommendation because we can monitor it as it goes forward. This was the best deal I could get.”

“I’m going to support it, but I’m going to be watching it closely and checking on the implementation, and if it doesn’t work, I’m going to make that case,” she added. Her biggest concern was making sure that the program remained diverse.

In November I wrote, “For me, it is important that the district has check-ins to monitor what the program looks like. I remain concerned that shrinking the size of AIM will be accompanied by making it a more white-Asian program and less black-Hispanic.”

We now have that check-in and it looks bad from the standpoint of diversity. Will that mean the district will tweak their model or reverse course? I have my doubts.

The second question of concern will be about the size of the program overall. Parents were already concerned that the size of program was the driving force for these changes, rather than need.

A false narrative occurred, exemplified by the Davis Enterprise editorial that jumped on board with the idea that the program was “initially designed only for students who had significant trouble learning in a regular classroom.”

The history we traced showed that not to be the case. The master plans that we analyzed showed that the program was always intended for both high intellectual ability and high achievers.

Going back 20 years, there is no evidence that GATE/AIM was meant strictly for students “who had significant trouble learning in a regular classroom.” Moreover, as Superintendent Winfred Roberson acknowledged in September, “There is no easy way to distinguish between high achieving students and those who are intellectually gifted.”

And so the assessment tools that are being put into place do not attempt to differentiate.

Is there an educationally-based reason to reduce the size of the program? As we have noted, the Superintendent, in researching for his report, found “that the qualification score ranges from 90-99th percentile in GATE programs throughout California.”

He added, “Analysis from relevant research as well as conversations with GATE teachers, principals and community input has led the administration to select a qualification score that is meant to best serve the DJUSD student population.”

The question now is whether an AIM program at 82 students and heading to 46 that has identified just five blacks and Latinos at the 96% level and just three at the 98% level is the one that is best serving the DJUSD student population.

Share:
Tags:AIM IdentificationDJUSDMadhavi SunderRaceWinfred Roberson
Previous : Sunday Commentary II: The Need For Transparency Underlies the Problem of Money in Politics
Next : 7 Reasons a Government Backdoor to the iPhone Would Be Catastrophic