In this country, we recognize the difference between a citizen who is exercising their First Amendment right to speak their mind on an issue, and a lobbyist who is paid by special interests to hire professional advocates to argue for or against specific legislation.

At both the state and federal levels, lobbyists are required to register. But we have no such requirements at the local level.

Much of the time that’s not a huge problem, but as we start putting development projects on the balance, it is helpful to know if citizens’ views expressed are their own or are the result of being hired consultants or representatives for projects.

A case in point is an op-ed that the Davis Enterprise published on February 26, “Nishi Gateway deserves a vote of approval.” The author is Lydia Delis-Schlosser. As she describes in her own piece, she is a 36-year resident of Davis, which certainly entitles her to an opinion on the Nishi Project.

But we also know that Ms. Delis-Schlosser has been a long-time employee of John Whitcombe. While Tim Ruff has been project manager for the Nishi project, the ownership of the Nishi property is equally divided among Mr. Ruff, John Whitcombe, Ray and Della Thompson and Joe and Karen Ogando.

In a September 2015 article in the Davis Enterprise where Mr. Whitcombe was interviewed, he acknowledged that Nishi Gateway was now on his “front burner.”

Lydia Delis-Schlosser writes, “The Nishi project has risen to the occasion. The project applicants have not only raised the bar in providing a quality innovative project to Davis, but they have done so with the care and collaboration we as a community expect and deserve.”

She adds, “No other project in Davis history has successfully balanced the diverse goals of this community as well as the Nishi Gateway is doing.”

She further adds, “I’ve also been impressed by the project applicants’ determination to provide a sustainable lifestyle for all site residents.”

The most reprehensible part of this is that the Davis Enterprise, which as part of the fourth estate is supposed to be a watchdog against these kinds of obfuscations, does not even disclose to its readers who Ms. Delis-Schlosser is or what her relationship is to the project owners and the project itself.

Last week, the Vanguard wrote about the corrupting influence of money on local politics. In that article, we noted that running for higher office offers a runaround of the $100 campaign limitations for city council.

It turns out that is just the tip of the iceberg. A reader provided this spreadsheet of Dan Wolk’s contributions from people with projects before him on the city council. 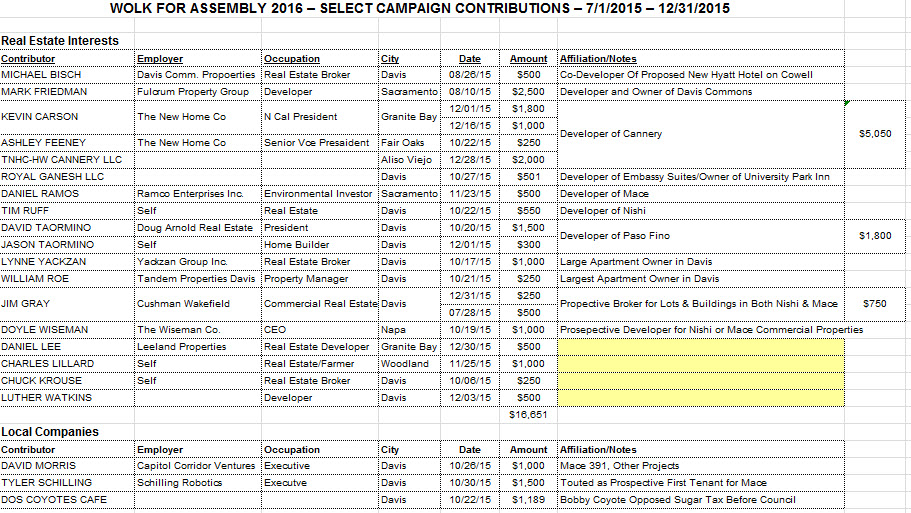 As we noted last week, there was nothing legally improper about these contributions. At the same time, one of the biggest concerns that “good government” people have is the corrupting influence of money in the system.

The more than $16,000 in contributions from key interests with projects in front of him is a sizable portion of his overall campaign haul from last year.

As we noted last week, the typical citizen does not have this kind of money to give. The Davis political system has been constructed with a $100 campaign limitation that hopes to reduce the kind of influence that monied interests can bring to bear on an office holder.

Unfortunately, sophisticated local interest groups have found ways to circumvent that. But that pales in comparison to the ability for these interests to help bankroll a run for higher office, where they are no longer bound by the $100 campaign limitations.

While some have suggested a publicly-funded campaign system, others want more limitations. Legal interpretations of money as speech aside, it is my general observation (as we have seen locally) that politicians and their backers will find a way around even stringent laws.

At the end of the day, the biggest defense around this type of influence may be instant reporting requirements. Instead of learning February 1 about a contribution from July, what if the campaign had to report all contributions in real time, as they came in? It’s not a perfect defense, but at least it gives us a chance to scrutinize the money as it comes in rather than months after the fact.

Transparency is a huge issue and is potentially an answer, but we need the tools to be able to act more proactively. Finding out five months after the fact does little to discourage this kind of potential influence peddling.

54 thoughts on “Sunday Commentary II: The Need For Transparency Underlies the Problem of Money in Politics”