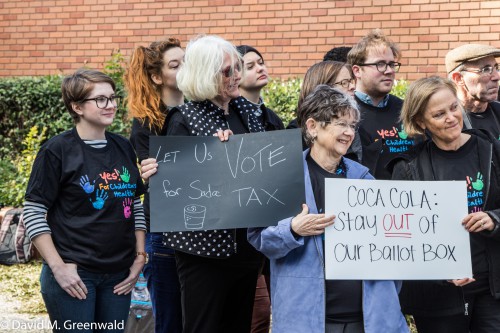 As a graduate student in political science at UC Davis, I often was a teaching assistant for a professor in American Government who would argue that, when the going got tough and a President wanted to kill an idea, they would assign it to a task force. While it may not have been the intention of the council majority last night to kill the soda tax, it effectively took the issue off the plate for now, by pushing it to a task force that will study the issue of sugar sweetened beverages and the council might act down the line.

As Councilmember Rochelle Swanson said, “I was very inspired by the Raise the Wage conversations earlier.” She cited the conversation that will emerge and go forward and argued, “Frankly, that is more the Davis way, we don’t have someone at public comment two week ago and suddenly we have it on the ballot.”

She continued, “Twenty-three years for Nishi, 36 years for the water project. We did half of what we wanted for parks tax because we wanted it to be success.”

Councilmember Swanson argued that we need to have a have a conversation and take a more wholistic approach to the issue.

“I really think we should have the conversation,” she said. “I want us to have a real conversation that involves a number of folks.”

Mayor Pro Tem Robb Davis called the sugary beverage tax “something we haven’t done in Davis before which is a public health intervention.” He said, “This is different – I’m not exactly sure why it’s different.”

The mayor pro tem put a motion on the table, “I want to move that we put a one cent tax on the ballot. That we pattern it exactly after the Berkeley Model… That there be a small business exemption. That the social services commission and parks commission advise the council as to how to use proceeds from it.”

He added into the motion an advisory measure to indicate the intent to spend the measure on children’s health programs.

Councilmember Brett Lee seconded the motion. As he was discussing ways to tighten the small business exemption, he expressed sympathy for the public comments on the struggles of small businesses.

As he was discussing this however, Councilmember Rochelle Swanson put a substitute motion on the floor. She said, “I want to move that staff come back in two weeks and have a model similar to the Raise the Wage… so that there’s real outreach. I’m not comfortable with the anecdotal outreach.”

She said, “I worry that this is political and philosophical. I don’t want to exempt our way out of it if it’s really about raising money and it’s really about children’s programs. I think there’s a way to have a win-win here and educate the community while we decide what’s right for our community.”

Councilmember Swanson said, “This is really about it being the right fit and I don’t think six months’ time is really going to make or break some individual’s choices. I want to see us get it right.”

Councilmember Brett Lee said that he does not believe that the substitute motion is acceptable. He said, “Ultimately we have the window right now where the June election would allow a general tax to be placed on the ballot and if 50 percent plus one would like to do it, then it passes. We’re essentially asking for a two year delay on this if we don’t support putting it on in June.”

Councilmember Lucas Frerichs said, “I’m not supportive of the underlying motion this evening.” He said that he is not opposed to the notion of a soda tax, but he is not prepared to support it tonight.

He said that he’s “dumbfounded” over this issue because “this conversation for months and months has been all about infrastructure and needs of the city, for revenue for infrastructure. Roads, parks, you name it. There’s a variety of needs. We had a process that was set up for possible revenue measures… Not once did this come up in that entire months long process.”

He noted that it was first brought up two months ago on December 1. He continued, “We have the city’s goals. The city council set goals.” He acknowledged that one of them was to ensure a healthy community, “but it’s one thing to have that larger banner goal there, but if you actually go look at the 50-page document, that is the city council’s set goals, not one place is it mentioned.”

“The process is a real issue for me,” he said. He said there is a need to keep the eye on the prize, and he supports a true community engagement process. “At this time I’m not ready to support the underlying motion this evening.”

Mayor Dan Wolk said, “The soda tax has never been part of my, our, highly successful healthy families initiative. Though certainly becoming the first city in the nation to eliminate soda from kids meals or at least making milk and water the default beverage was one thing, and we accomplished that and I’m really proud.”

He said, “I’m not a big fan of big soda, it’s a real issue in our society.” He added, “What has been part of my vision is to pass a revenue measure in June 2016, that would fund at least parks and recs facilities, that would fund infrastructure.”

He said revitalizing the community pool “has been something that’s near and dear to my heart.”

“I’m intrigued by a soda tax. I want to definitely learn more about it. But as an infrastructure revenue measure, that’s to me what we should be focused on in June 2016,” the mayor continued. “I think we need a different tool.” He added, “The soda tax is very controversial. It hasn’t been… studied or really vetted by the community. It would engender well-funded opposition – that’s clear certainly from Berkeley. And it would have difficulty at the ballot box.”

The council voted 3-2 to pass the substitute motion, with Robb Davis and Brett Lee remaining in opposition.