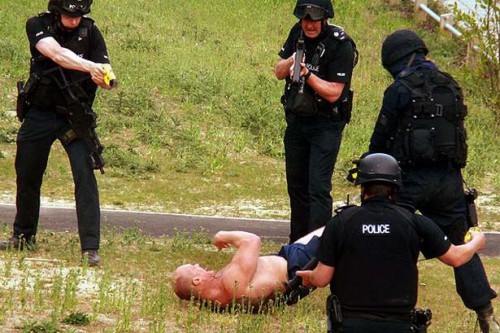 Back a couple of weeks ago, the Vanguard sat in on a case where Woodland police officers had responded to a domestic violence call. During the call, dispatch made it abundantly clear the suspect had no weapons on his person. Deputy Public Defender Joseph Gocke was defending the man, who faced felony charges involving great bodily injury and child endangerment.

Despite the information passed via dispatch radio that the suspect did not have a weapon on his person, officers entered the home believing he did. The suspect was holding his one-and-one-half-year-old baby on his right hip. He and his girlfriend had an argument and he had attempted to take the baby with him as he tried to leave the residence.

Still, officers could not get the man to comply, so the sergeant decided to Taser him. He immediately fell to the ground and the toddler was taken out of his grip.

Thankfully, the child was not hurt in this incident.

It raises yet another concern of safety for human life, both the suspect’s and his child.

Many times an officer has no idea of a person’s mental health or level of intoxication from drugs and alcohol. What about a person’s medical conditions? How is it safe to assume those answers?

Critics have argued that Tasers and other high-voltage devices can cause cardiac arrhythmia in susceptible subjects, possibly leading to heart attack or death within minutes of being Tased.

Even though Tasing may not be the entire cause of death in a person being Tased, it may be a contributing factor that significantly heightens the risk of death. In most fatal cases, a person dies within minutes of Tasing but reports have revealed death can occur a day later, up to a few days later after Tasing.

In several noted cases resulting in death, police officers had repeatedly Tased a suspect even after they had gained control of him/her.

Supporters of the Taser device claim it is a more effective way of controlling a person than a baton, hand-gun or pepper spray. However, supporters state that it is a “less-lethal,” not “non-lethal,” means of use.

The U.S. Justice Department claimed the majority of those Tased were not injured, however the head of Amnesty International, Jared Feuer, reported that 277 people had died after being Tased.

The most troubling part is, “80% of those were unarmed.”

One of law enforcement’s own, in Las Vegas, suffered serious injury during a training course with Tasers. Another 70 reported deaths occurred in 2004 and in 2005, including a man who was Tased while in a hyperglycemic shock. Police officers claimed he was a security threat.

In 2006, an elderly woman, wheelchair-bound, died after 10 Taser shocks.

Probably most disturbing was to learn about a visiting judge in a lawsuit against Summit County Ohio Medical Examiner Lisa J. Kohler, who had cited three deaths due to Tasering. Lisa was ordered by the judge to remove all Taser words from her autopsy reports on the three men, and to rule the deaths “undetermined” rather than “homicide.”

Unbelievable, right? But, as the years pass, the number of deaths by Taser increase.

Although the Woodland police sergeant testified in the preliminary hearing that he felt the man holding his child may have had a weapon, no such statement was ever made during the dispatch radio communications.

Some argue it to be the safest way to gain control of a suspect. But what if a person happens to be ill, medically or mentally, and on medications?

How can an officer assume the welfare of an individual? The reality is, it is often too late to think about the consequences of his/her Tasing a suspect. And often the police officers’ excessive use of a Taser goes without reprimand.

Adding to the grave danger of Tasing is the inhumane factor. Electric shock prods have been used to get sheep and cattle moving again, as herders move a flock or herd from one place to another, not on humans. It bears a strong likeness to torture on both humans and animals.

Amnesty International has had an ongoing battle trying to make the use of Tasing banned in Canada and the quest is spreading with other supporters.

The Vanguard spoke with a Woodland police officer who stated, “I agree Tasing can be dangerous but you just have to use good judgment, caution when you arrive on scene. I would rather use a form of wrestling in order to gain control – it has been most effective and completely safe. If more officers used these techniques instead of reaching for the Taser gun, situations would be less dangerous for all of us.”

Although, he added, “there is also the what if’s, what if you didn’t use it and a suspect got away and hurt someone, killed people, it’s just a tough call all around.”

Share:
Tags:PoliceTaserUse of Force
Previous : Mariko Yamada Endorsed by SEIU California
Next : Guest Commentary: Why I Joined the Effort to Tax Sugar-Sweetened Beverages

22 thoughts on “Guest Commentary: Taser Use Resulting In Unnecessary Deaths”