Waiting for them was Chancellor Linda Katehi. The Chancellor, learning from the public relations debacle of five years ago, embraced the students both literally and figuratively. She issued an apology and offered fast action on all their demands, which she said were quite reasonable.

For the protesters it was a show of a variety of emotions – anger, sadness, and most of all determination.

ASUCD President Mariah Watson read a statement: “The black community here in Davis DOES NOT FEEL safe. Anti-blackness pervades every aspect of this society including academia.” She continued that the first priority of students should be to learn and incidents likes these “compromise our focus.”

“Our reality is that we are in danger,” Ms. Watson continued. She noted that many people questioned why black students were out protesting last quarter. “For anyone questioning whether anti-blackness is real, a member of our community was attacked.”

“As a leader of this community, as a part of this community, it hurts,” she said, the emotions coming through. She accused the university of “not prioritizing these needs until now.” Ms. Watson said, “I think it’s absolutely outrageous that it takes one of us getting physically attacked for this many people to show up for our community.”

Kathleen Hinkson and Kelechi Ohiri told the protesters that on February 15, a Monday, at 3 a.m., “a black female student was the target of a hate crime in West Village.” The three men responsible for the assault were apprehended and charged with two hate crimes.

Though these men were arrested, they said, questions remain in the black community as to “what can stop any of us from being the target of such an attack?” They asked, “Will we ever feel safe on this campus?”

Kelechi Ohiri explained, “The victim of this incident went through two minutes of automated messages before she was able to speak to an officer after she was attacked. Although campus police were helpful when they arrived and have taken this incident seriously, the wait time to speak to someone is concerning.”

She also expressed concern about “the lack of support for the victim and others impacted by this event.” She added, “As blacks students we face so many challenges being at the university, having to worry about our safety on a daily, nightly, hourly basis should not be one of them.”

Ms. Ohiri said that many students have resorted to the “buddy system” in the last week in order to feel safe on the campus.

Sydney DeLone the internal Vice President of the Black Student Union, was the one who would read the “demands” from the protesters. She stated that the hate crime “is not an isolated incident. It was just one of many that was actually reported and followed up upon.”

“We are demanding that our safety be a priority of the University of California, Davis and the UC System as a whole,” Ms. DeLone said.

Second, they asked for improved lighting. “UC Davis must install more lights in areas of our campus,” she said. “Our lighting is subpar and therefore our safety remains an issue. It is irresponsible to have a campus as dark as ours when we have classes and labs that run way past sundown.”   They also demanded that the university send a letter to the city of Davis “to also review their ordinances regarding lights and fixes.”

Fourth, a UC-wide policy that addresses anti-blackness. “UC Davis must submit a letter of support urging the UC Regents to create a policy that targets anti-blackness in the UC. Part of the reason these incidents continue to occur at disproportionate rates is that our community is seen as less-than, uncared for, or not worthy of support.” She said, “In order to ensure our safety, you must validate our worth and experience.”

Finally she called on the university to “review and finish the plans that were previously presented. We are grateful for our center, but we will not be appeased by a single building. Our experience, the hate, the racism will not be curbed because we have a center on campus.”

The Black Student Union gave the university “until February 29 to meet our demands.”

Chancellor Linda Katehi, following the student speeches, addressed the protesters, stating, “When one of our black students is attacked, we all are attacked.” She said, “I stand here next to you to just promise you one thing, that I will work as hard as I can to really make sure that you feel safe on our campus.”

She called the incident “heartbreaking” and expressed anger and frustration that the students were expressing concerns that they did not feel safe on the UC Davis campus.

“I want to apologize for that,” Linda Katehi said. “It is unacceptable that we as a university have failed you.” She added, “I cannot stand here and promise that tomorrow will undo all of these things. But I can promise to you that I will work as hard as I can to change things around here.”

She told the students, “I hope that students that come after you will have a different story to tell.”

Chancellor Katehi told the students that she and her staff will look hard at their demands, calling them “very reasonable,” and stating, “I have no reason to believe that we will not be able to really act on each one of them.”

The Chancellor was embraced following the speech by many of the leaders of the protest.

ASUCD President Mariah Watson explained what anti-blackness was and its history. She said, “It is the incident that happened at 3 a.m. on Monday morning outside of our home. It is professors telling us that our experiences that we bring here and our backgrounds don’t matter. That, once we enter this home, we’re just UC Davis students.” She said, “Excuse me, but tell that to my history.”

Ms. Watson criticized people who question the severity of the attack by saying, “Was it that bad? She didn’t die.” She criticized people for “ranking our oppression,” noting, “whether you’re spat at, called names or physically attacked, it’s still anti-black.”

She said of the demands, “They are not luxuries, they are necessities.”

Mariah Watson led the students in a moment of silence and then led them in a resounding chant of “Black Under Attack.” 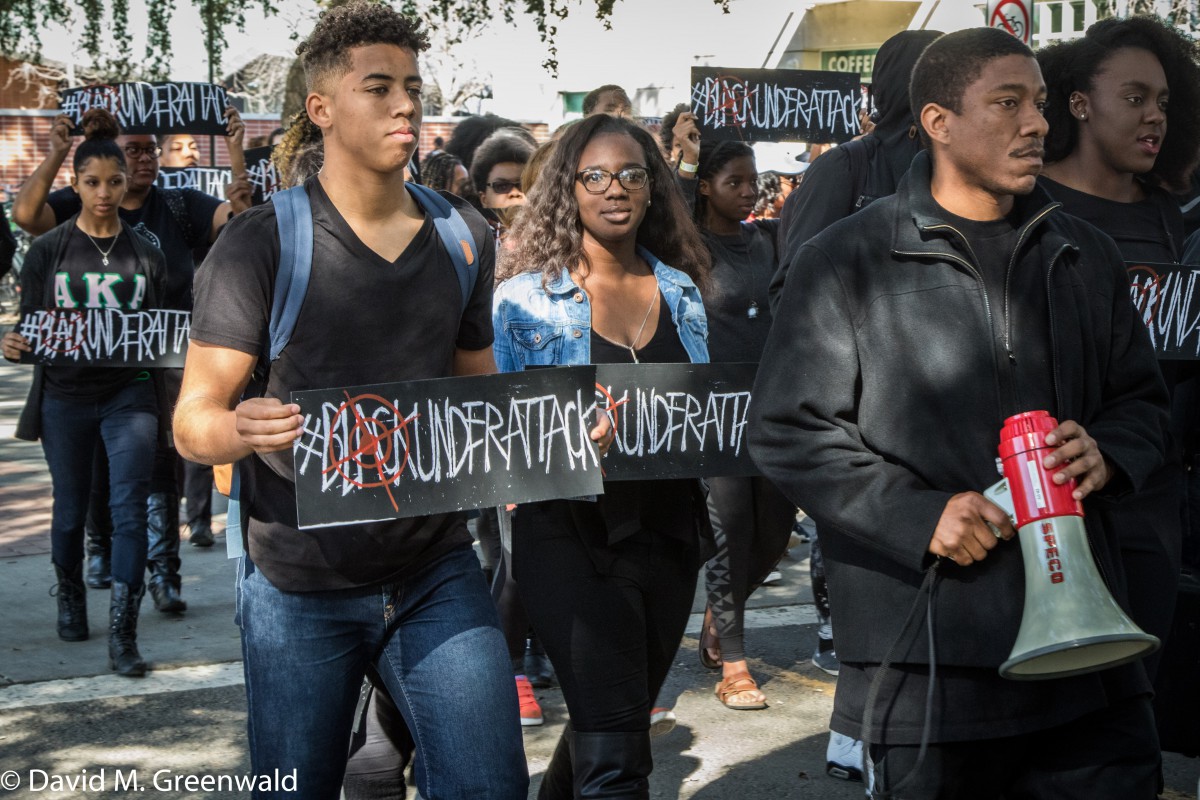 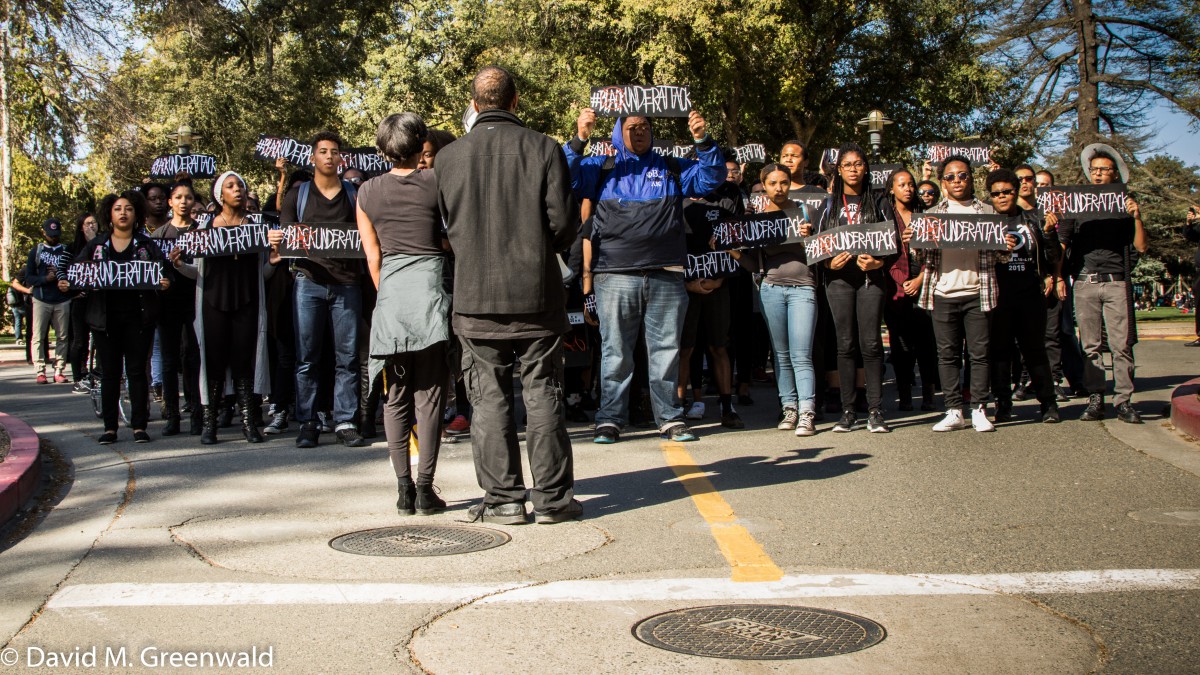 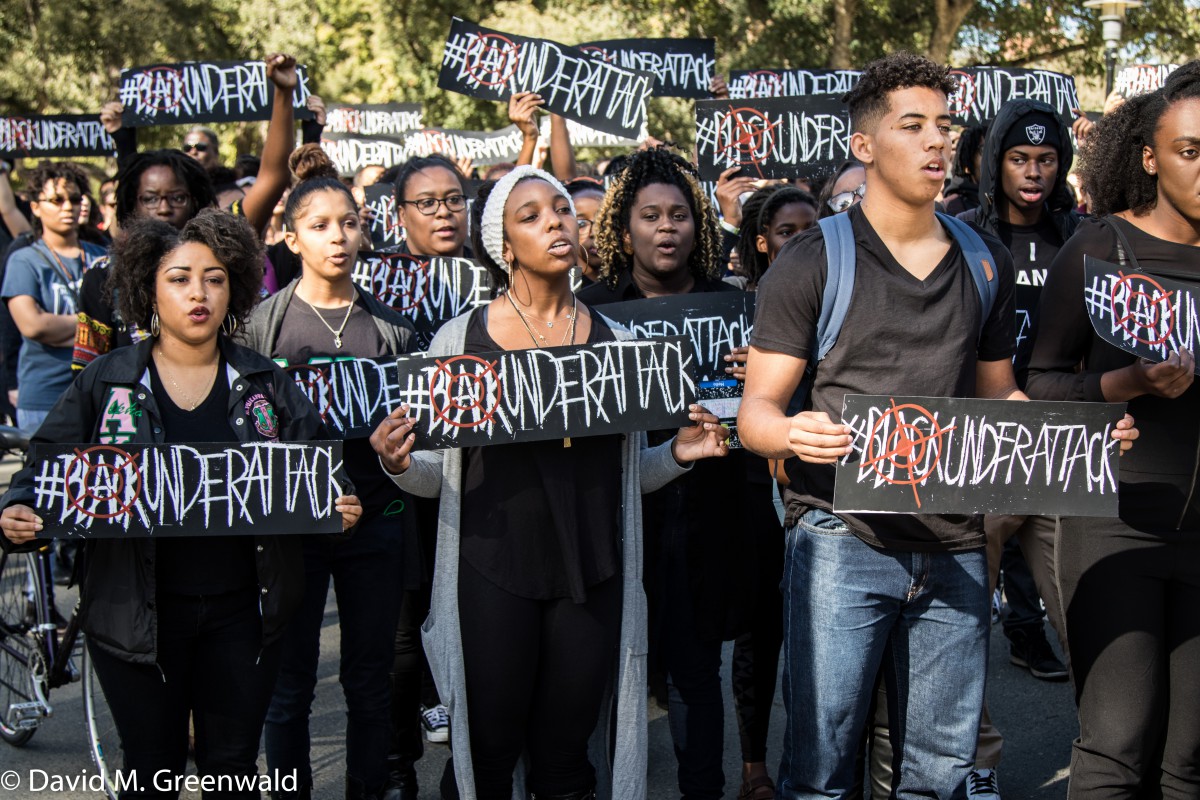 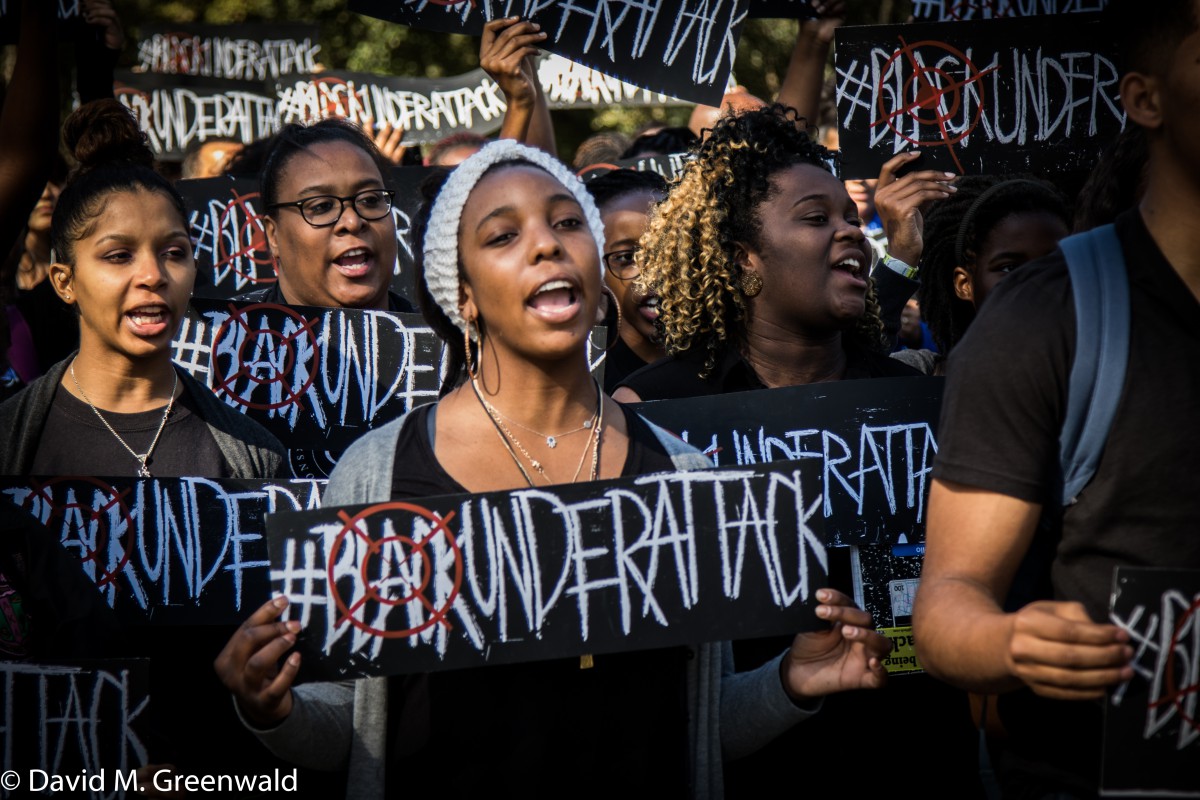 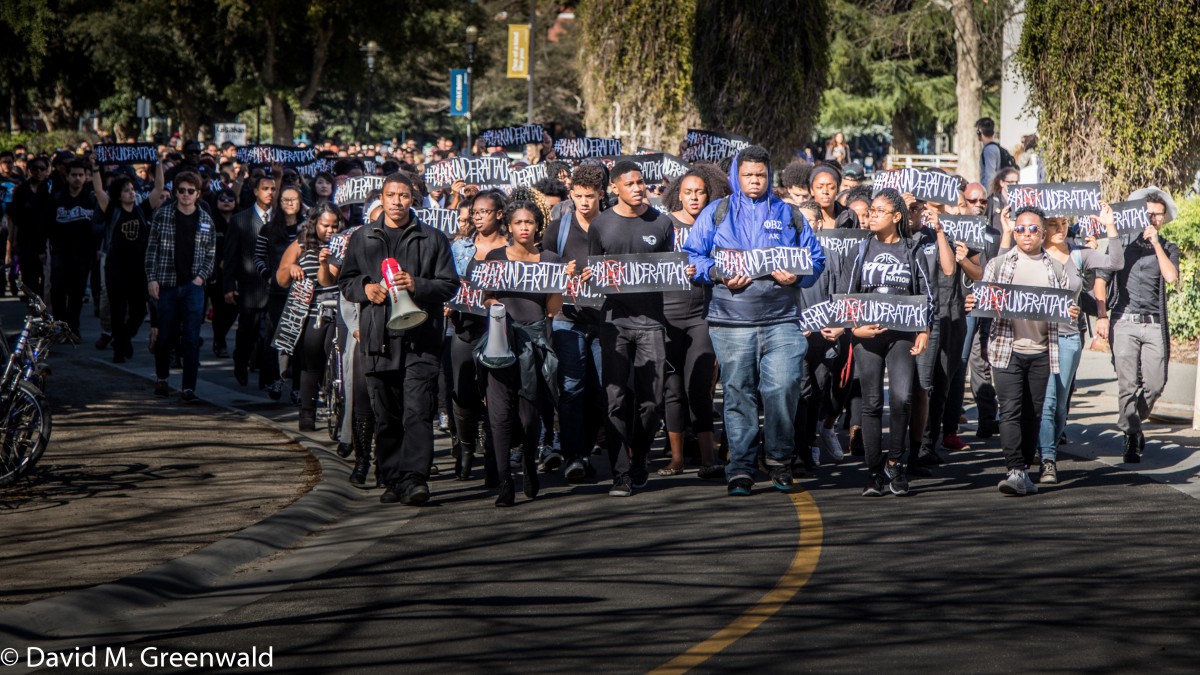 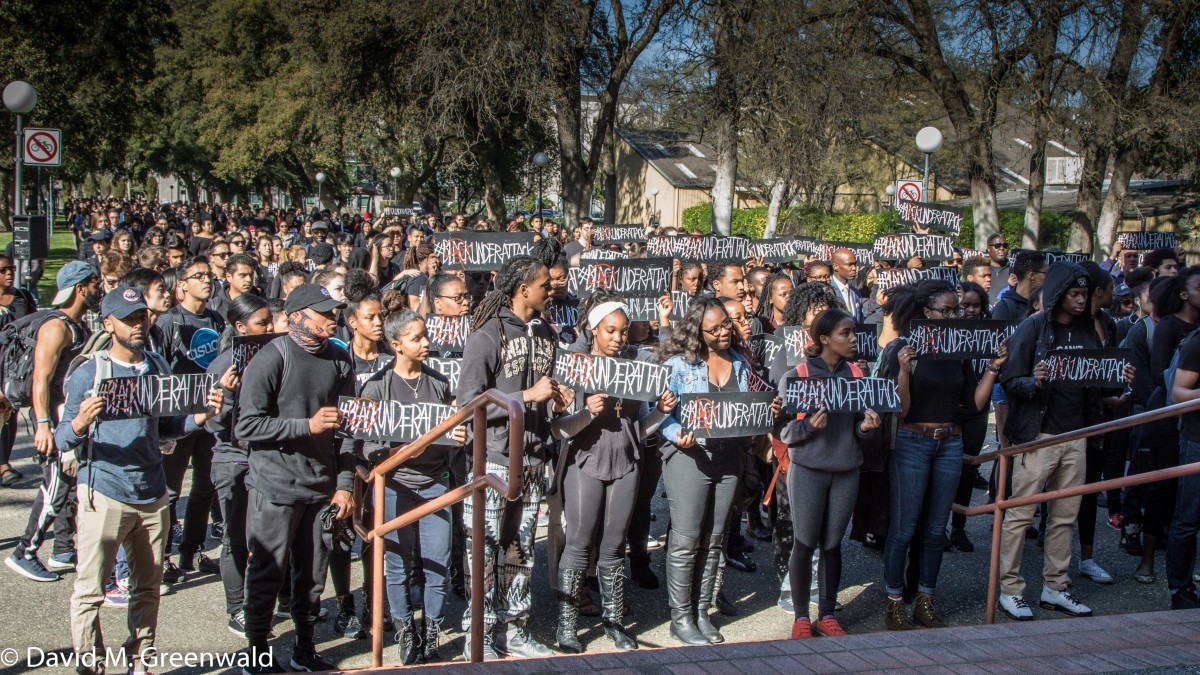 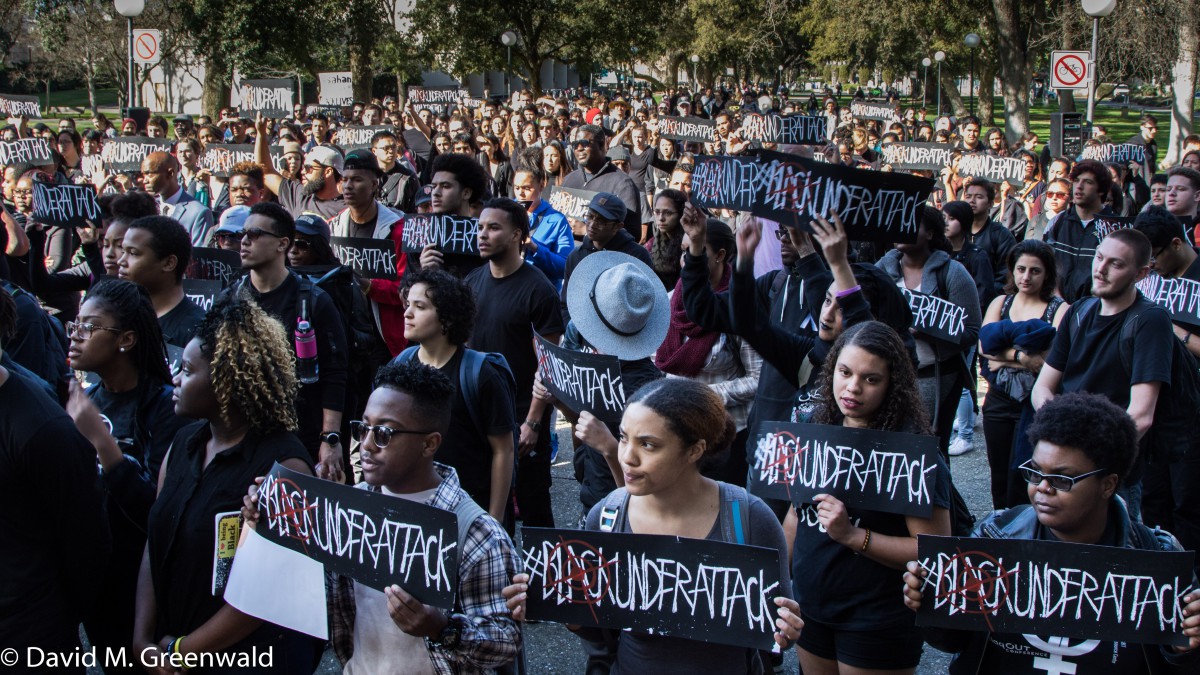 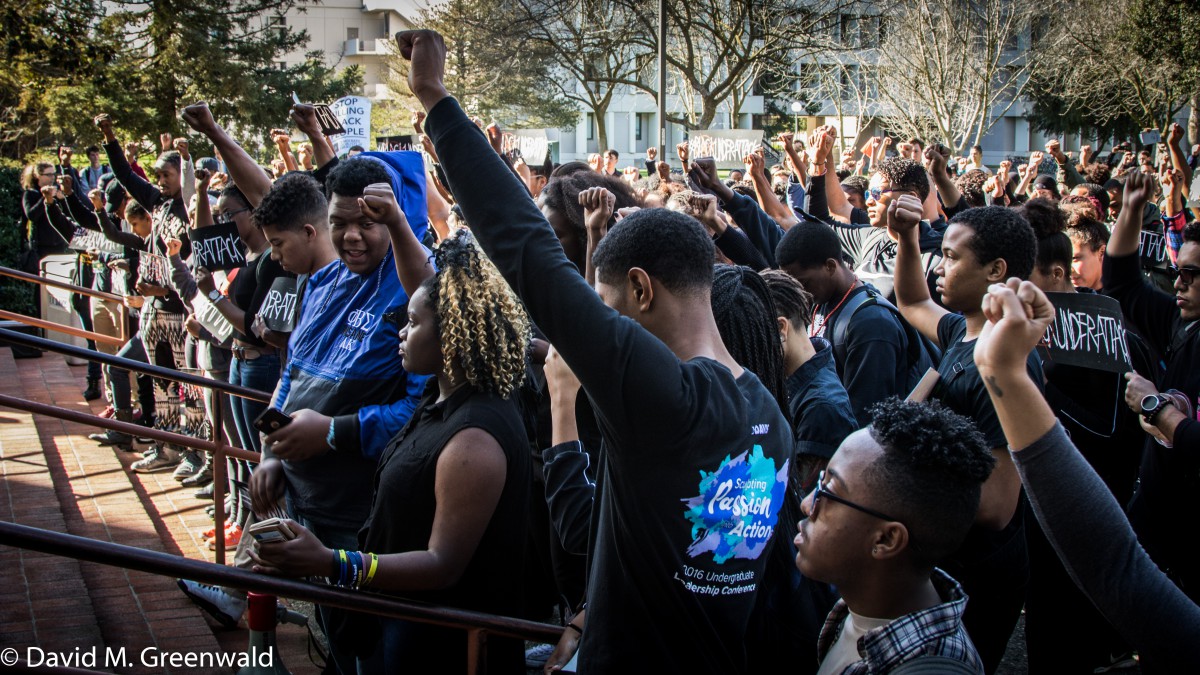 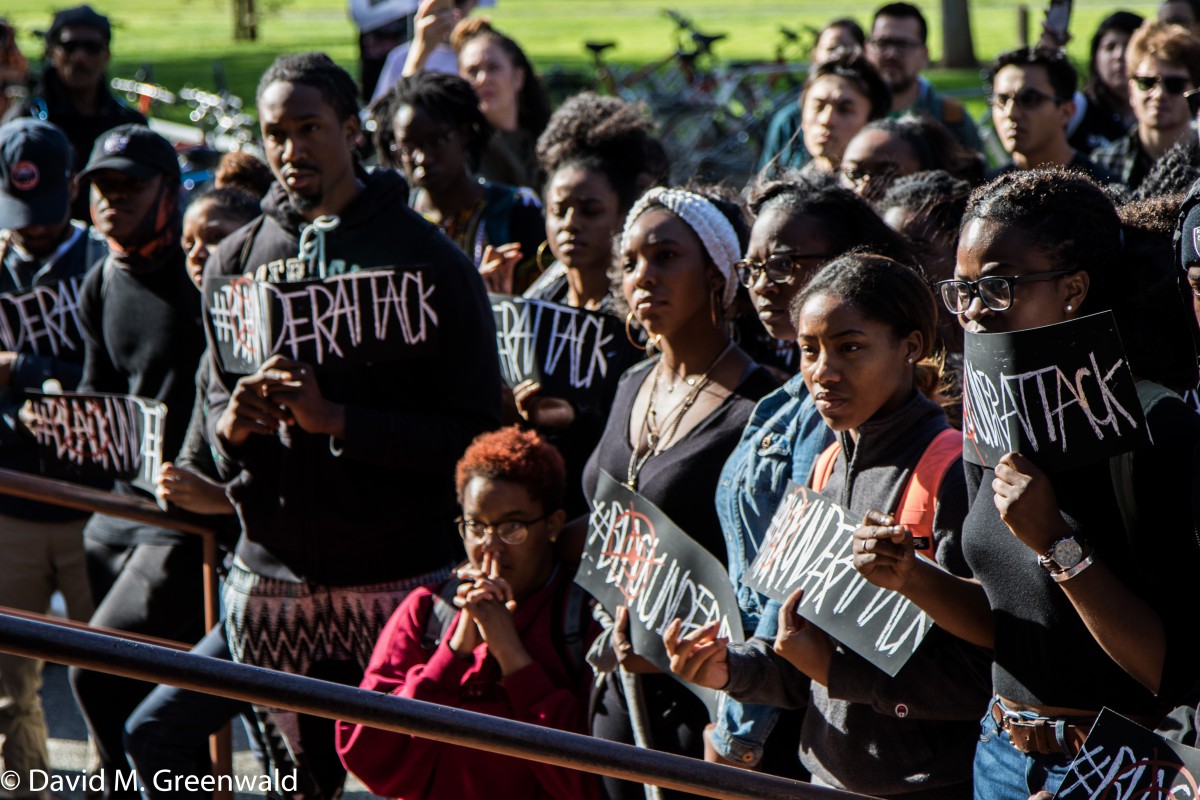 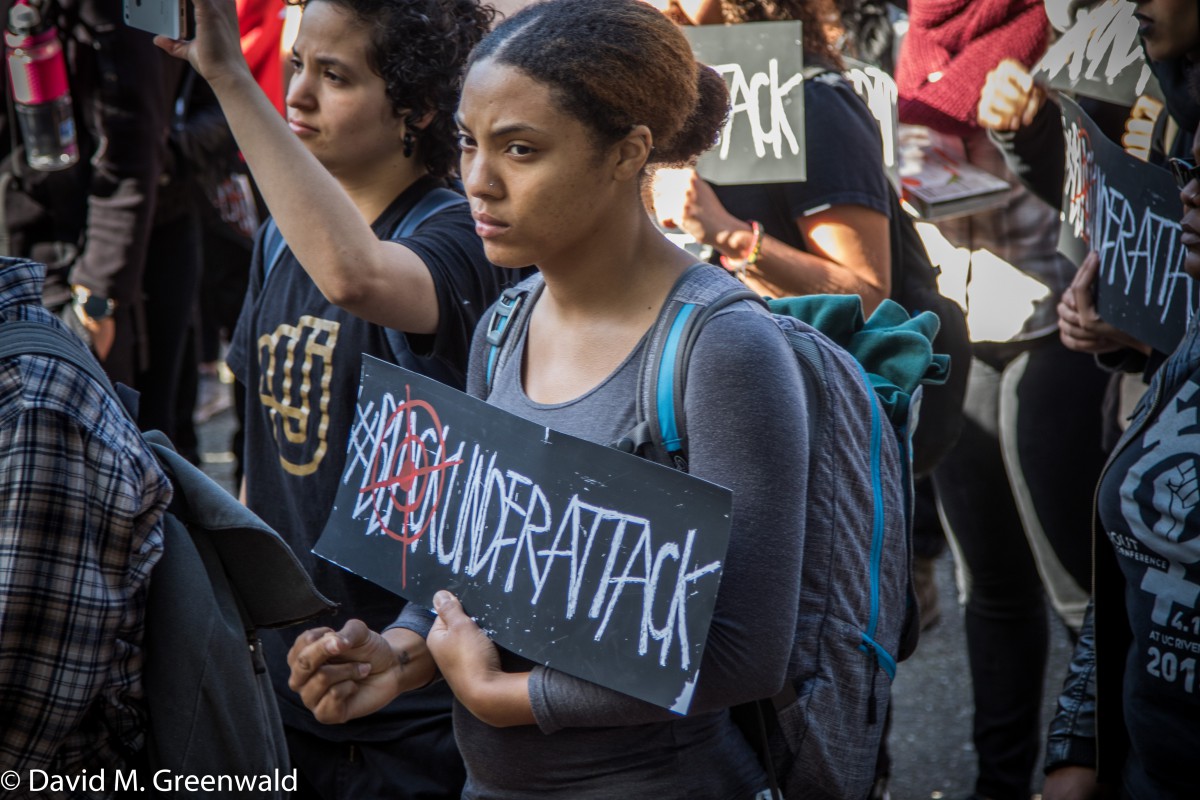 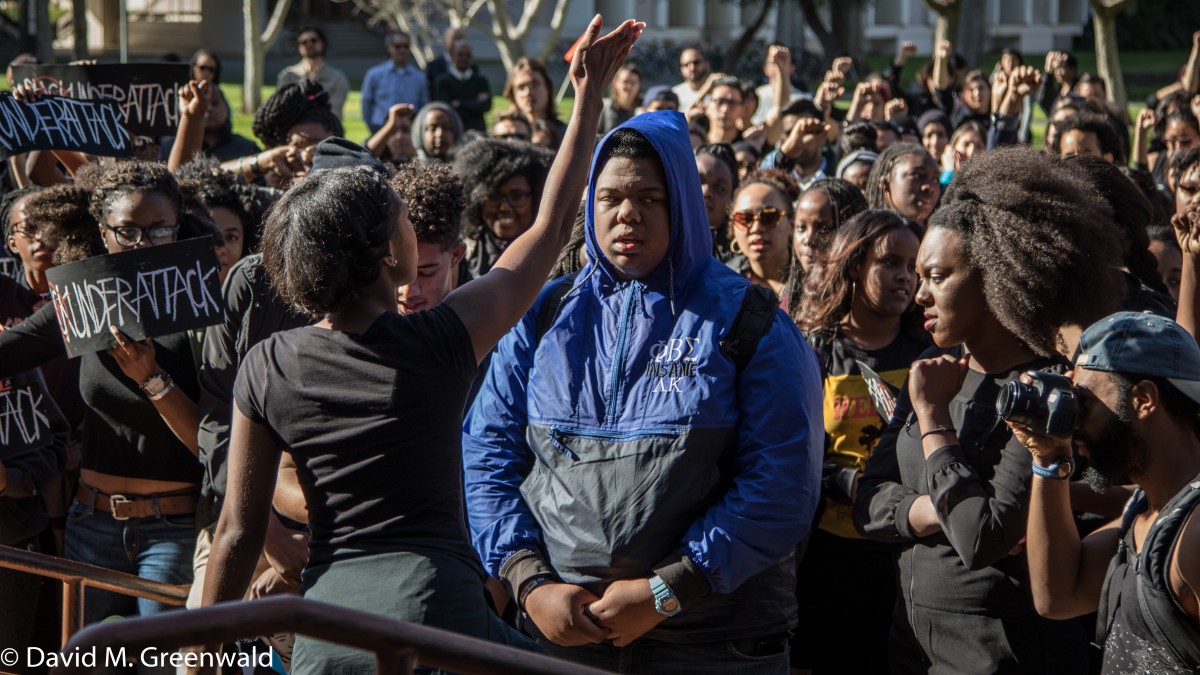