Davis is changing, and the pace is accelerating. A friend commented to me a few days ago that Davis today reminds him of Westwood, near L.A., in the 80’s. This is a pivotal time, and citizens of Davis need to decide what it is that we want to become. My background is that my first “real job” was as junior engineer for a sanitary and civil engineering firm. I drew up plans for streets, sewers, treatment plants, and did construction inspections. My doctorate is in microbiology. I am seriously concerned about global warming – par for most citizens in Davis.

This article is about the misnamed “Organics program.” This program was pushed through by a dedicated group of a few bicyclists and a committee of eco-activists. Interestingly, one of the most vocal proponents lives on an unusually large multi-acre parcel, and he will not be affected because he has space to compost everything, recycle his yard waste or burn it, and told me he plans to opt-out. We composted everything possible for several years, but ran out of space to put it when it was decomposed. Like many, we try. I think we all want to.

This Organics program is a mish-mash of apparent good intentions that doesn’t make sense and accomplishes the opposite of what it claims it will. Mostly, it was basically conceived to clear the streets of yard waste because some cyclists hate the piles. No matter that there are already city ordinances about overlarge piles of leaves and branches. No matter that those ordinances are not enforced much, but pressure could be brought to do so. Yes, I cycle in Davis a lot, including several times a week on the B Street corridor.

It is true that there are management guidelines adopted by city managers[1] that say cities should convert over to yard waste bins. As far as rationales go, that is pretty much it. Nobody has asked who put this particular guideline in, who lobbied to get that provision, nor who stands to benefit. There are two obvious parties that benefit from lack of claw service: Sellers of yard waste bins and landscape contractors. Aside from that, it’s another good excuse for cities to cut services. But let’s not dwell on that – bottom line is that saying something is in a set of guidelines for cities is no argument at all. That is sometimes called “appeal to authority,” but in this case it is just appeal to paperwork. There is no actual authority named. Those guidelines are faceless. I will show by the end that those guidelines are completely wrong, and should be revised to do the opposite.

I spent a lot of time digging into this issue. I recorded yard waste piles in the off-season. And I got DWR records for tons of yard waste removed going back years. What I found is that when you do the math and projections, this program is completely off-base.

First, let’s ask, “What is the City of Davis proposing for green waste?”

During the week beginning with the 1st Monday of each month, DWR will collect green waste placed on the street for materials that do not fit inside the cart. 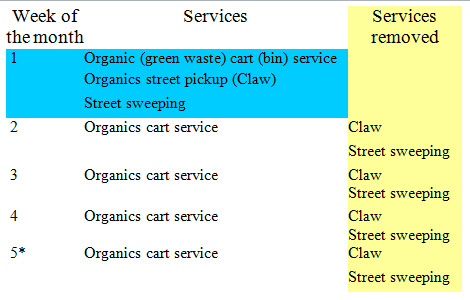 What is the bicycle advocates’ position?

“Loose waste should not be on our public streets except when it can’t be avoided – leaf drop season.” – Davis Bicycles!

“Davis does not have the resources to ensure clear bike lanes at all times, nor is there the will to provide completely effective enforcement. Waste management policy is the only way to clear the lanes.” – John Berg (Quoted from Nextdoor 2/21/2015)

Their goal is permanent elimination of claw service. All property owners will be responsible for their own yard waste. This is a large de facto property tax increase, because it eliminates a major basic service without giving back tax revenue to property owners.

I will show in graphs that the proposed policy will make bicycle safety worse. The logical conclusion is that making safety worse is desired to achieve advantage in advocating for claw elimination.

How much do yard waste piles encroach on bike lanes, and how big are these piles?

I did a survey of size in February 2015, for a 20 block area. This is considered the off-season, and that agrees with Davis Waste Removal (DWR) figures. Piles don’t create a large problem. And traffic in the city of Davis is not that heavy except downtown and on a few streets like Covell, where I have never seen any problems.

Ten percent of the piles partially block bike lanes. None of them creates anything remotely like the hazard from far more numerous cars. Anyone who bicycles on B Street is familiar with this kind of car scene.

As you can see in the yard waste volume graph, the vast majority of those piles won’t fit into the 95 gallon bins. This correlates with my experience in Marin County as a homeowner, where these bins were adopted with similar promises. The inability of green waste bins to handle clippings, brush and branches, etc, was ridiculous. It was always necessary to call a service or find a friend with a truck.

To reiterate, 10% of the piles partially block bike lanes. They create no problem remotely like the hazard from far more numerous cars, and anyone who bicycles on B Street is familiar with the traffic hazard.

As you can see in the yard waste volume graph, the vast majority of those piles won’t fit into the 95 gallon bins. This correlates with my experience in Marin County as a homeowner, where these bins were adopted with similar promises. The inability of green waste bins to handle clippings, brush and branches, etc, was ridiculous. It was always necessary to call a service or find a friend with a truck. 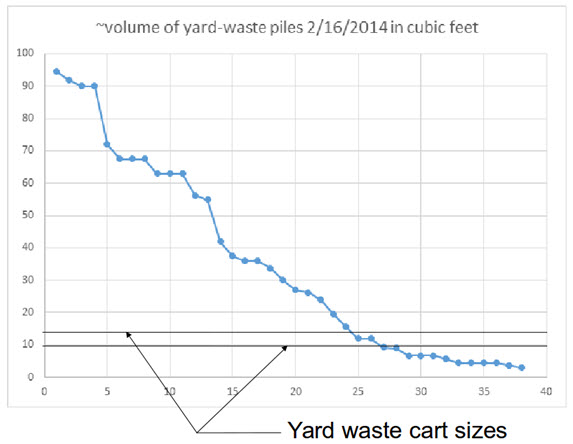 I was unable to find any documented cases of accidents with cyclists and yard-waste piles, only unverified reports. A young boy’s mother said he scraped his leg on a pile. After watching young boys interact with yard waste piles, I suspect that the collision was intentional, although the scrape wasn’t. Considering how protected most young boys in Davis tend to be, I might go so far as to consider yard waste piles to run over a significant perk of Davis life.

Plants grow in Davis all year round. In the “slow season” 5% of the piles are leaves, the rest are brush, and branches. Under this Organics Program proposal, for 9 months of the year during collection week, will be almost 3 times what it is in the current peak season. Those weeks will be more than 4 times the current average! Volume of yard waste on the streets in April and May will be 5 times what they are now! Not only that, but unlike leaf season it will be 90% or more branches and brush.

Davis waste removal supplied yard waste in tons, and projections for once per month compression.

If the current piles are a hazard, 3-5 as many piles will be much worse for cyclists! Not only that, but all those piles will interfere with parking.

But there is another problem. In safety studies, when a hazard is routinely encountered, the frequency of accidents per encounter goes way down. When the hazard is intermittent at long intervals, accident rates go up.

Where will the new carts go and other practicalities

Some residents will have little choice but to store the new cart on the street. We don’t have space for another bin. Nor do many others. A growing number of residents are older and find lifting into bins difficult.

There are no reflectors on the bins. Davis Bicycles has reports of bins in bike lanes already. It is common to see the gray bins on the street now, also without reflectors. Of course, it is true that too many Davis residents bicycle at night without lights or reflectors of any kind. It seems fashionable. I was just noting the large number of bicycles downtown last night, and several black bikes with students on them wearing black clothes and black caps, and no helmets. I can only hope they bounce well.

Just like trains are far more efficient per passenger mile, the same is true of trucks. If claw service is eliminated, based on the approximately 15,000 homes in Davis in 2014, that should mean between 5,000 and 10,000 trips to the dump every month in small trucks or car trailers. That is far less efficient than 15-30 trips using dedicated trucks.

Doing the math on those figures shows that any purported greenhouse gas cut that could possibly be achieved from the compostables diversion is hugely outweighed by the CO2 increase from more trips to the dump. Using EPA figures, 1 gallon of gasoline burned = 8.87 kilograms of CO2. If it is a 20 mile round trip to Woodland, and the average car or truck gets 25 mpg, then each trip produces a bit over 7 kg of CO2.

In other words, Davis Waste Removal’s carbon footprint for yard waste removal is 1% of what a combination of private lawn services and citizens can do it for.

A sane and sensible look at the numbers says that the city management guidelines should be revised. Instead of playing let’s pretend and fobbing off real costs onto property owners, while worsening the climate problem, cities should do everything possible to pick up yard-waste and dispose of it efficiently. City waste services should be trying to handle more, not less. Compostable paper plates and table scraps are nothing by comparison to the cost of many small trips to the dump. It makes no sense to spend resources chasing tiny improvements while creating vastly larger increases.

The weekly claw makes ecological and safety sense. We need to keep it.

[1]          . Per verbal report at Davis City Council meeting. I have not seen these guidelines, but I have no reason to doubt them.