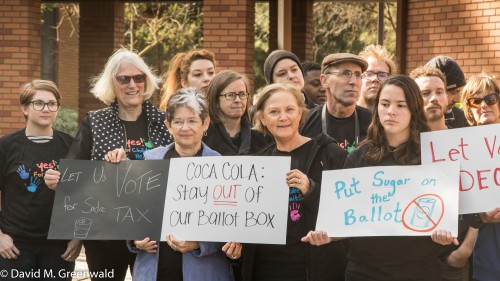 I keep seeing reference in letters to the editor and Bob Dunning’s columns questioning why the health industry is going after soda or sugar-sweetened beverages and ignoring a whole host of other sugared up products. The first answer is that, from a practical standpoint, you can’t go after everything at once.

So the real question is why attack SSBs first. That was the first question I asked Dr. Harold Goldstein back in December.

Dr. Goldstein told the Vanguard that research has found that half of the rise in diabetes and childhood obesity is attributed to SSBs. So, by attacking soda, we are going after the factor that is the biggest bang for the buck.

“What makes sugary drinks ‘uniquely harmful’?” they ask. “Sodas, sports drinks, vitamin waters, sweet teas and fruity drinks are the single largest sources of the added sugars we consume each day. One 20-ounce soda has 16 teaspoons of sugar. Imagine putting that much sugar in your morning coffee. Imagine having your kids put that much sugar on their morning cereal!”

In 2005, researchers SJ Nielsen and BM Popkin published a study in the American Journal of Preventative Medicine. They looked at changes in beverage intake between 1977 and 2001 and found, for all age groups, “sweetened beverage consumption increased and milk consumption decreased. Overall, energy intake from sweetened beverages increased 135% and was reduced by 38% from milk, with a 278 total calorie increase.”

A 2010 meta-analysis published in Public Health Nutrition by Gail Woodward-Lopez, et al. found, “Obesity rates and sweetened beverage intake have increased in tandem in the USA.”

They write, “Studies consistently show that higher intake of sweetened beverages is associated with higher energy intake. Energy in liquid form is not well compensated for by reductions in the intake of other sources of energy. Well-designed observational studies consistently show a significant positive relationship between sweetened beverage intake and adiposity. More importantly, several well-conducted randomized controlled trials have shown statistically significant changes in adiposity as a result of corresponding changes in sweetened beverage intake.”

As Robb Davis has described it, sugar is everywhere, “what we have in a sugary beverage is we have a delivery system… it’s almost like a cigarette in terms of what it gets, it gets sugar to your pancreas in a hurry.”

There are several different factors at play here. Pan A and Hu FB in 2011 published an article that found huge differences between liquid and solid food in the effects of carbohydrates on satiety. Satiety is the feeling of being full after eating food. It is a huge factor, because one of the problems with liquid drinks is that they do not fill people up like solid food does, and thus many people will consume more liquids.

“The physical form (solid vs. liquid) of carbohydrates is an important component that may affect the satiety process and energy intake. Accumulating evidence suggests that liquid carbohydrates generally produce less satiety than solid forms.”

But there is another factor as well. Not only do liquid drinks fail to satisfy our appetite and therefore increase caloric consumption, but the delivery mechanism masks the amount of sugar we are consuming.

However, there is another huge factor here – as a diabetic I can feel the intake of sugar through liquid far faster and far more profoundly than I can through solids. This is the delivery mechanism that Mayor Pro Tem Robb Davis was referring to.

In order to get the sugar from food, the body has to break down the food itself – that takes time and there is fiber and other factors that reduce the consumption of the sugar. On the other hand, drinking liquid sugar is like mainlining it directly into the system, creating an immediate effect and much more efficiently.

Consider the consumption of alcohol. If someone eats food along with the alcohol, or consumes the alcohol after having a full meal, the body ends up not absorbing nearly as much of the alcohol – the intoxication takes a lot longer and one must consume far more alcohol on a full stomach than on an empty stomach.

Sugar acts in much the same way. So for me, while sugar consumption will spike my blood sugar, I can feel the effects of the intake of sugar much more quickly in liquid form than I would even eating a piece of cake.

In my view – and it appears to be the consensus of researchers – liquid sugar is far more dangerous to the body than other forms of sugar.

That is not to say we should stop at attempting to reduce SSB consumption and ignore other forms of sugar, but the totality of the circumstances suggests that soda and SSBs are a problem. It is their rise that appears to be a key driver in obesity and diabetes epidemics. It is the area where the largest increase in sugar consumption has occurred in the last 30 to 40 years.

SSBs do not satisfy appetite and therefore are basically add-ons to other consumption. And the delivery system is far more efficient.

It is fun to try to shift the topic from soda to all sugar. It is what makes for a good conversation. The perfect solution is often the enemy of a good starting place. But based on the research I have read and my own body physiology, I would say that soda and SSBs is the place to start the discussion and, once we have reduced their consumption, we can look at other remedies.

33 thoughts on “My View: Why Go After Soda First?”