The proposed one-cent per ounce tax on the distributors of sugar-sweetened beverages will generate from $1-2 million annually. Revenue collected in Berkeley in the first year of its tax is projected to be over $1 million and has been earmarked for healthy living programs.

In Davis, the Social Service and Parks & Recreation Commissions, with the Davis Joint Unified School Board, will gather information from residents as to how tax revenues can best be spent each year to keep Davis children healthy and active, and will present recommendations to the council.

Ms. Eastin asked that the city council “give the voters a chance to vote [for a] sugary drink tax.” She said, “The reality is this, we have an obesity crisis in California.”

“There is a lot of misrepresentation going on by the soda industry,” she explained. “They would have you believe, oh, we will raise taxes on sugary drinks to fix the roads – that is not true.”

As Superintendent of Public Instruction she toured schools in all 58 counties in California and said that parents and teachers alike are alarmed by the overweight conditions of our students. “This leads too often to things like Type-2 diabetes, to things like sleep apnea, and other impacts on health.”

She cited a UCLA study showing that being overweight can shorten your life by over 20 years. “We must be focused on the health of our children – the ounce of prevention that’s worth a pound of cure. Or an ounce less of sugar that’s worth a healthy child.”

The tax may reduce consumption, she said. “We hope so. The truth be known, kids are drinking, way, way, way too much sugar.” However, she called it “terrifying” how much sugar kids are consuming when they drink more than one soda in a day.

Ms. Eastin called the soda tax “a matter of letting the people decide.” She said, while we would join Berkeley in having this tax, we would be doing so “in a way that builds momentum across the state such that other communities will make this decision so that the information is spread that sugar drinks are really dangerous for our kids.”

Supervisor Don Saylor noted that it will take four votes to put this on the ballot, “A soda tax is really one of many measures we should be asking people if we want to pursue in our community.” He said, “We have so many kids in our community and communities like ours across California who are suffering from the early onset of diabetes. But that’s not even the worse issue facing them… public health officials are identifying them with fatty liver disease – it’s tearing our country apart, it’s hurting our kids, it’s going to cause future generations to falter.”

He called on the community to have the conversation about sugar-sweetened beverages. “We have to have that conversation – it’s not a matter of when, we need to do it right.”

“The conversation we’re talking about is putting the measure before the voters of Davis,” he added.

Mayor Pro Tem Robb Davis hearkened back to his time, 25 years ago in Africa, where he worked with malnourished and impoverished children and connected it to the current fight. He said, “I never thought that I would be standing here twenty-five years later talking about the challenges on the other end of the spectrum – of children, really whose lives are starting to be taken away by fatty liver disease and the problem of over-consumption of sugary beverages.”

“We’re talking about a broken food system,” he said referring the policy and monetary interests that have created this problem. “Fundamentally broken. Overproducing sugar and the over-promotion through advertising and marketing. This is what we’re up against.”

Mr. Davis noted that the research identifying these causal pathways is happening right here at UC Davis among other places. “We are at the epicenter of defining the problem,” he said.

Robb Davis said that people ask him what a tax in one city, like Davis, would do. He called it “the beginning of a process and a movement.”

He said that “there has been no public health campaign in any of our lifetimes that didn’t start with people in communities saying we need to change things.”

Robb Davis noted that tobacco laws didn’t come into place because there was “some overlord that dictated them.” Rather it was because research done at research institutions showed us that we were dying and we need to change. “Today, no one is smoking a cigarette here. No one is going to be smoking a cigarette anywhere around here and we’re all healthier for it,” he said.

He said we have an opportunity to make a change – “All I really want is to put this on the ballot.”

Former Davis Mayor Ann Evans said that she wanted to address the power of politics. “We are in front of a building where shortly there will be a decision made as to whether or not the people of this town have the right to make a decision about something as simple as a soda tax to create more programs, accessible programs for healthy children in our town.”

Ms. Evans noted that for the last 15 years she has been working on making school meals healthier. She noted that, while we spend $33 billion a year on food advertising, there is no money for simple school garden programs in the state.

“If we want that to occur, we have to support it at the local level,” she said. “This kind of soda tax gives its citizens and the council who speaks on our behalf the opportunity to provide every child in Davis that type of education.”

“We have a chance to add, to our revenue stream in Davis, a soda tax. But the council has to have the vision as well as the courage to allow us to decide and this would not be the first time Davis took a step that was unlike steps other cities are willing to take,” she said. “We have been a leader throughout my entire time in this city.”

She noted that Davis was the first to disinvest in South Africa, to provide regulations for solar and so on, and “now is the time for disinvesting in the kinds of sugary beverages that children are drinking by educating them about the importance of not drinking and giving them equal access to education and lifelong learning.”

“What is the hang up here?” she asked. “In my day, my council, this would have been on the ballot.”

Restaurant owners are claiming that the tax would be a big burden on them, she continued. The tax, she said, is on the distributors, the bottlers, those that “deliver the sugary drinks to Davis.”

She said that restaurant owners are warning that this will cause the cost of soda to go up. She said this is a good thing and she hopes that, much as the rise in the cost of cigarettes caused people to smoke less, raising the cost of soda will reduce consumption among our kids.

The four of them then demonstrated just how much sugar a small number of popular drinks produces: 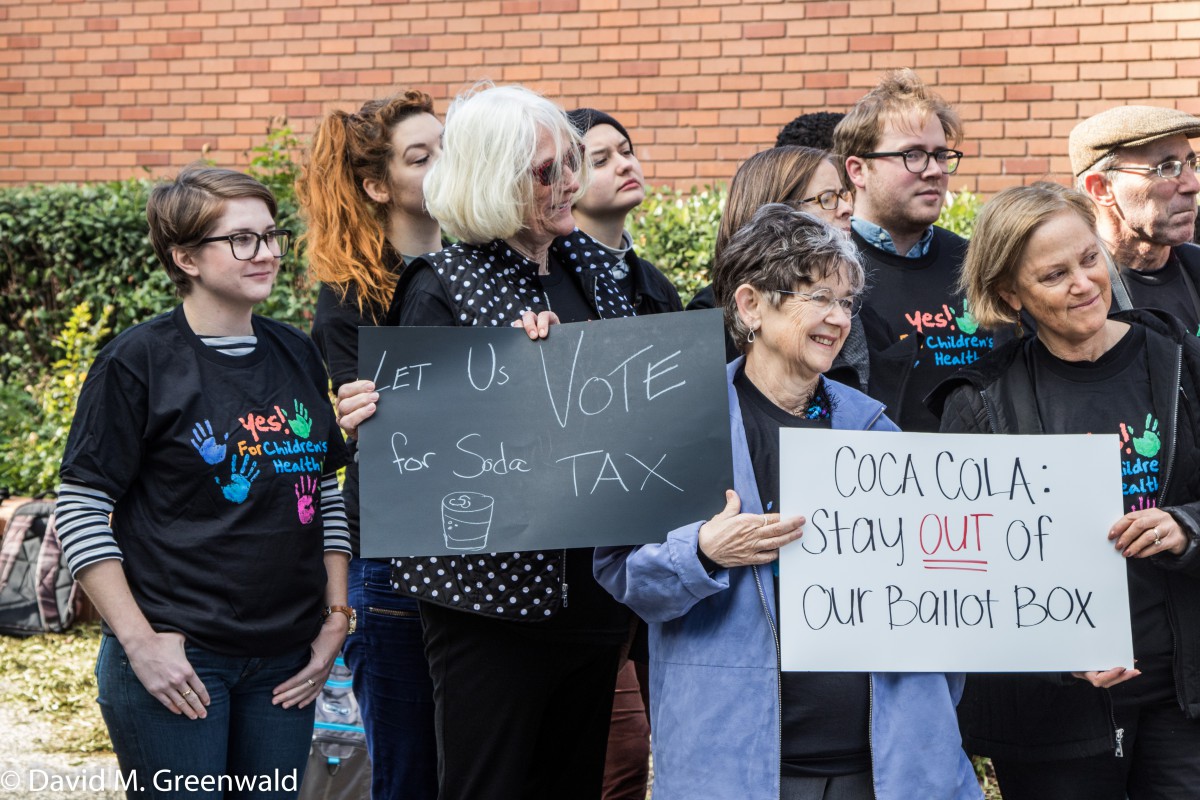 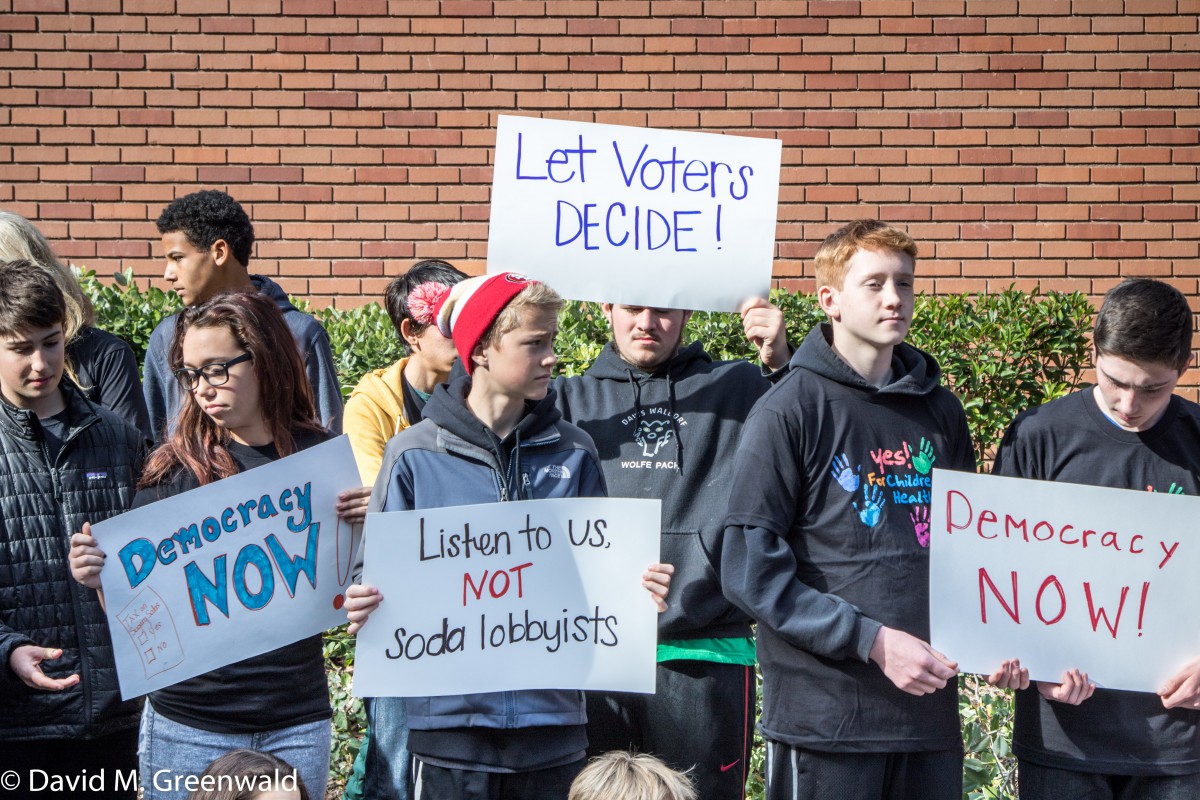 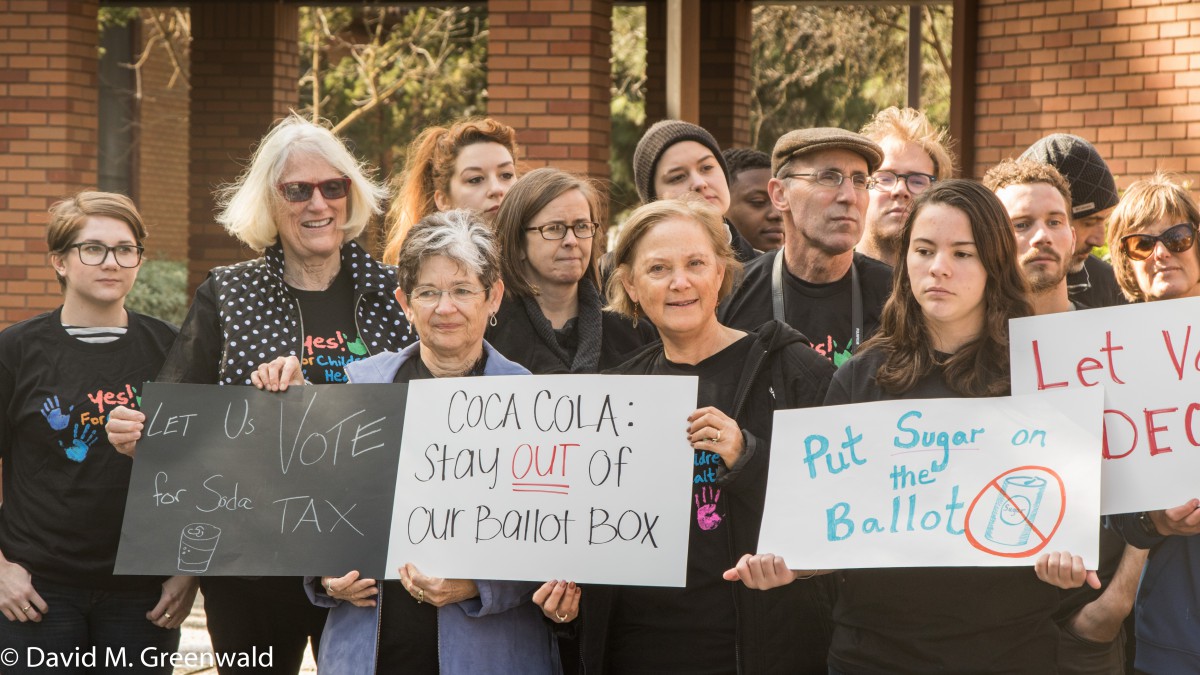 The council has until February 16 to decide whether to act, and the matter will be on the agenda for discussion tonight.