A first-ever study found that nearly half of California adults – including one out of every three young adults – have prediabetes, a precursor to life-threatening type 2 diabetes, or undiagnosed diabetes, according to a new UCLA study.

The research provides the first analysis and breakdown of California prediabetes rates by county, age and ethnicity, and “offers alarming insights into the future of the nation’s diabetes epidemic,” a release stated.  The study found that 13 million adults in California, which accounts for 46 percent of the state’s population, are estimated to have prediabetes or diabetes, while another 2.5 million adults (9 percent) have already been diagnosed with diabetes.

Combined, the two groups represent a majority of the state’s adult population, 15.5 million or 55 percent of the total population. “Since diabetes is more commonly seen among older adults, the study’s finding that 33 percent of young adults (18 to 39 years old) have prediabetes is of particular concern,” the release stated.

Conducted by the UCLA Center for Health Policy Research and commissioned by the California Center for Public Health Advocacy (CCPHA), the landmark study analyzed hemoglobin A1c and fasting plasma glucose findings from the National Health and Nutrition Examination Survey together with California Health Interview Survey data from over 40,000 respondents.

Dr. Harold Goldstein, the report’s co-author and executive director of the California Center for Public Health Advocacy, based in Davis, told the Bee that he did not expect to see such high numbers. He told the paper, “The numbers are so large that they stop you in your tracks. … It’s hard to digest that the situation is as bad as it is.”

Moreover, he added, “These are the young adults who grew up during the childhood obesity epidemic.”

He said in a release, “This is the clearest indication to date that the type 2 diabetes epidemic is out of control and getting worse. With limited availability of healthy food in low income communities, a preponderance of soda and junk food marketing, and urban neighborhoods lacking safe places to play, we have created a world where diabetes is the natural consequence.”

Recently, the Davis City Council, under pressure from the beverage industry who dumped millions into fighting soda tax campaigns in Sacramento and Berkeley, declined to put a similar measure on the Davis ballot, instead suggesting the need to study the issue.

However, Mayor Pro Tem Robb Davis has called this “the public health crisis of our time,” and in January warned that we have children “whose lives are starting to be taken away by fatty liver disease and the problem of over-consumption of sugary beverages.”

In Yolo County, the number is 48 percent of all adults – who have diabetes or prediabetes. As startling as that number may be, however, Yolo County is better off than most counties. 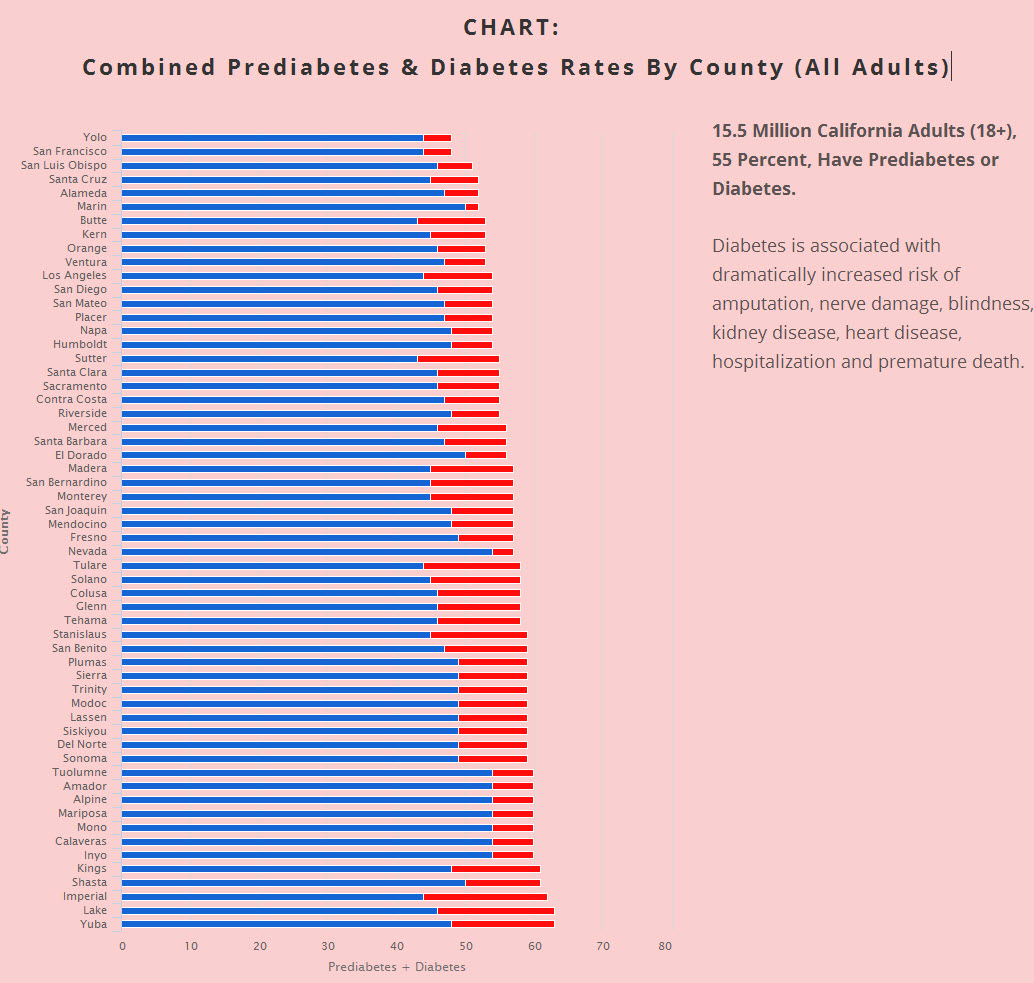 Still, one in three people under the age of 40 are already pre-diabetic in Yolo County, and that number increases to over 50 percent for those over 40. 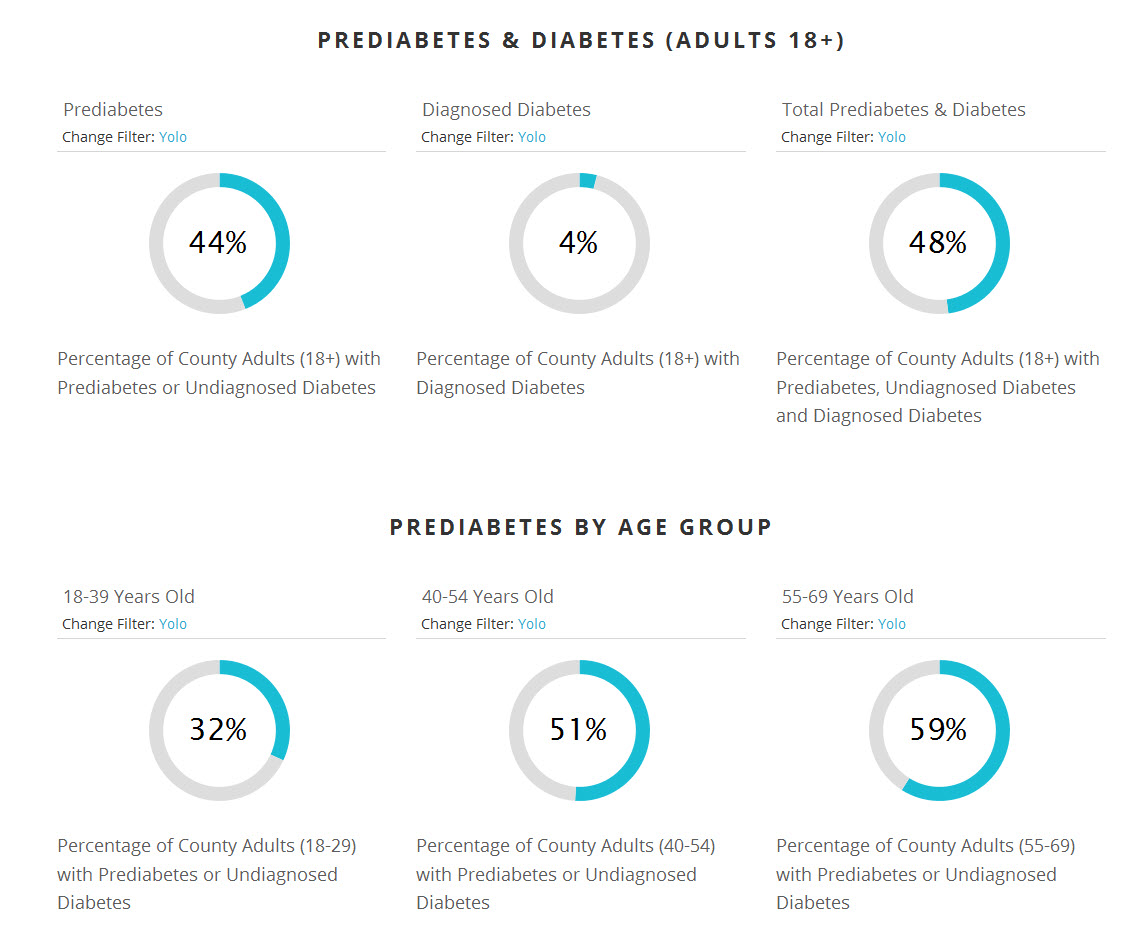 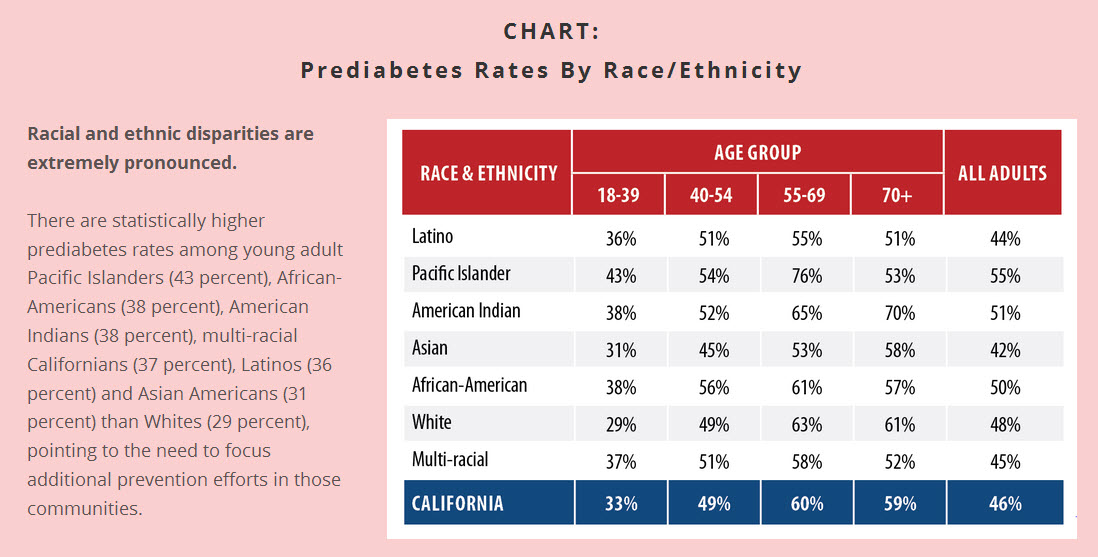 Unlike type 1 diabetes, which is genetic and not preventable, type 2 diabetes is preventable. “Diabetes, particularly type 2 diabetes, is a significant and growing health problem that affects both adults and children and can cause a number of serious complications, including blindness, kidney disease, cardiovascular disease, amputation, and premature death. Nationally, the prevalence of diabetes among adults has nearly tripled over the past 30 years.”

The researchers note that ‘‘not only does diabetes increase the risk of serious medical complications, but it is also extremely costly to families, businesses, health care plans, states, and the nation.’’

The researchers note, “Almost 95 percent of diagnosed adult diabetes cases are type 2. If you have type 2 diabetes, your body does not use insulin properly. At first, your pancreas makes extra insulin to make up for it, but over time it isn’t able to keep up and can’t make enough insulin to keep your blood sugar at normal levels.”

Type 2 diabetes “is a progressive disease that gradually wears out the pancreas and overloads the liver, resulting in higher blood sugar that damages vital organs, the nervous system and muscles. If not managed properly, the disease can have debilitating physical effects, including damaged blood vessels, heart attacks, strokes, blindness, liver disease, certain kinds of cancer, kidney failure, bone fractures and limb amputations, as well as premature death.”

They add, “Despite medical advances helping those with diabetes to live longer today than in the past, a 50-year-old individual with diabetes will, on average, die 8.5 years earlier than someone without diabetes.”

The study notes, “Diabetes cost the United States an estimated $245 billion in 2012, with $176 billion in direct medical costs and $69 billion in indirect costs (e.g. lost productivity, disability and premature death).

“In California, total health care and related costs for the treatment of diabetes is about $24.5 billion each year. The disease adds an extra $1.6 billion dollars every year in just hospitalization costs, with hospital stays for patients with diabetes costing nearly $2,200 more than for patients without diabetes. Three-quarters of that care is paid through Medicare and Medi-Cal, including $254 million in costs that are paid by Medi-Cal tax dollars. On average, medical expenditures for people with diabetes are 2.3 times more expensive than for those without diabetes.”