After historic lows in crime, crime has ticked back up in the past year. There is a lot of finger-pointing, but the fact of the matter is that we won’t know for a few years if this is the beginning of a new trend or simply a temporary blip in a continued downward trend.

In California, the blame is being placed on Proposition 47 and, to a lesser extent, AB 109. Many of the people pointing the finger are those who opposed Prop. 47 in the first place and have a vested interest in seeing it fail.

Last week Yolo County DA Jeff Reisig, in a report to the Yolo County Board of Supervisors, put the blame squarely on Prop. 47.

He noted reports from the Public Policy Institute of California (PPIC) which show that California is leading the way in violent crime increases, and violent crime is rising faster in Sacramento than in other large cities. This, he argues, bleeds into what is happening in Yolo County.

“All of the major cities in Yolo County, Davis, Woodland and West Sacramento, have seen increases in violent crime and property crime in 2015,” he said. “We are surrounded by the very imminent threat, and I don’t think it’s going away.”

“Our efforts so far have been pretty dismal,” he said.

But research, while probably premature, at least casts some doubt on the conclusion that Prop. 47 is the driving force in the uptick in crime.

Is Proposition 47 to blame for the increases in reported urban crimes? That is the question, Mike Males, Senior Research Fellow at the Center on Juvenile and Criminal Justice, puts to a test. 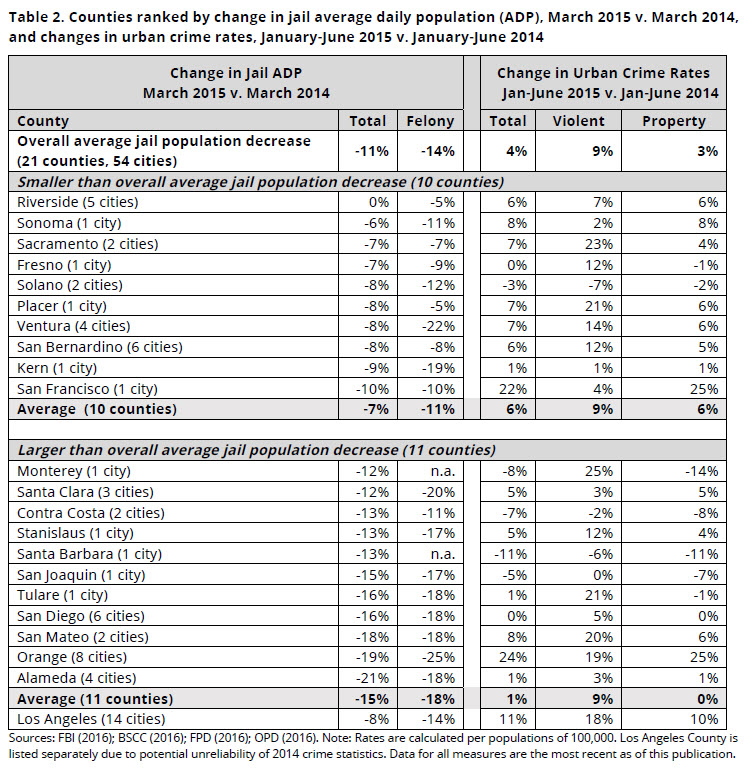 The study compares “changes in crime rates, from January–June 2014 and January –June 2015, in California’s 68 largest cities to changes in: (a) county jail populations and (b) Proposition 47-related discharges and releases from prison to resentencing counties.”

Mr. Males argues, “If the reduction in local jail populations after Proposition 47 passed in November 2014 is responsible for the urban crime increase in early 2015, as some sources are arguing, then cities in counties with the largest reductions in jail populations in 2015 would show the biggest increases in crime. However, the data suggest this is not the case.” 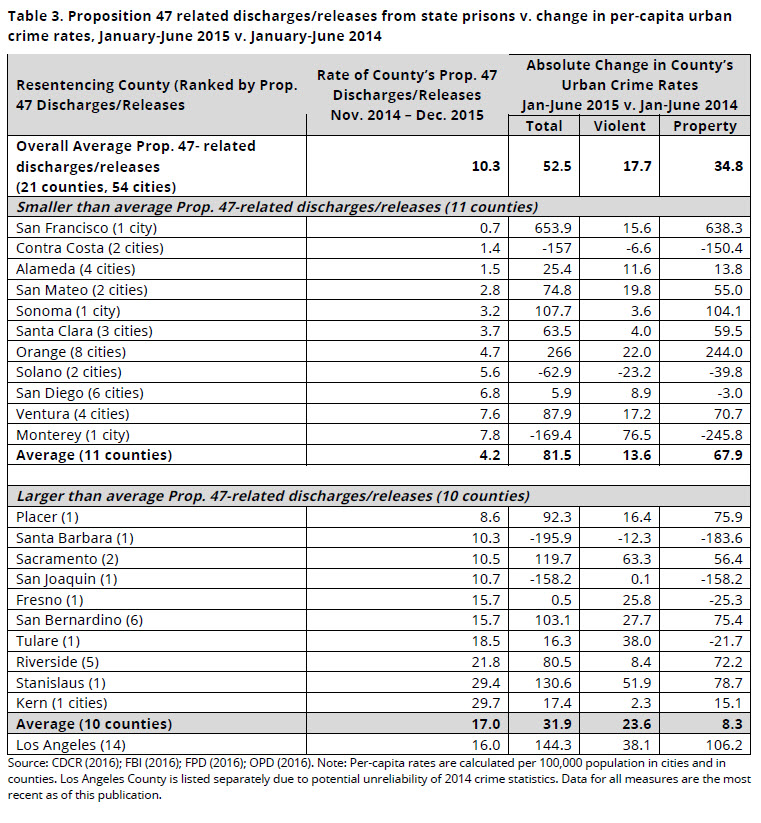 Based on this, Mr. Males concludes that “there are no obvious effects associated with Proposition 47 that would be expected if the reform had a significant and consistent impact on crime. In fact, many cities in counties that experienced larger declines in local and state incarcerated populations after Proposition 47 took effect had more favorable crime trends.”

Like the Vanguard, he concludes, “It is too early to conclusively measure the effects of Proposition 47 on crime rates just one year after the law took effect. The urban crime increase in the first half of 2015 could be a normal fluctuation, such as those that occurred from 1999 to 2001 or from 2005 to 2006 (CJSC, 2016). Initial trends are often reversed later. In the case of Realignment, implemented in 2011, crime initially increased in 2012, but later declined sharply in 2013 and 2014.”

Finally, he writes, “the counties that show the largest jail and prison population decreases as well as more favorable municipal crime trends (such as in Contra Costa, San Joaquin, and Santa Barbara) can be further examined for potential model practices.”

This follows the chief criticism we have leveled at the Yolo County DA. The expectation was that these sorts of crimes would result in treatment options, with the money freed up from savings on incarceration. That part hasn’t happened. And while opponents of Prop. 47 like Jeff Reisig lament the rise in crime, they fail to take responsibility for their part in it.

Sources tell the Vanguard that there was a treatment plan that would have been implemented in Yolo County, that all the other stakeholders had agreed to, but the district attorney himself blocked it.

Yolo County has some options that the DA has reportedly refused to utilize. One possibility is to divert Prop. 47 defendants into treatment at the Yolo County Day Reporting Center. The DRC was opened in February 2013 and it provides vocational training, life skills which are designed to teach offenders the skills they need to find a job.

One of the programs they have includes drug and alcohol treatments. That is an existing program that has received high marks.

The other thing that the DRC can do is job training, providing vocational and life skills to help them get a job.

From our standpoint, Mr. Reisig has a potential solution right in front of his nose, and refuses to use it. Earlier in his presentation he bragged about the success of the Neighborhood Court diversion program and how jurisdictions across the state and even the nation were looking to adopt it.

While the Neighborhood Court program has a lot of potential, advocates of restorative justice approaches argue that we should go further – much further. In November 2013, the Vanguard featured Fresno County Judge David Gottlieb as a speaker and he had implemented a restorative justice program in Fresno involving youth offenders.

Right now the Yolo County program focuses mainly on victimless crimes, but Fresno has for 30 years been far ahead, bringing victims and offenders together.

Many have falsely argued that programs like restorative justice approaches are “soft” responses to crime. However, they are missing a crucial element. In a punishment-based system, the individual is incarcerated. They often maintain their innocence and rarely have to take responsibility for their crimes.

The district attorney, at the very least, has the opportunity to introduce a restorative justice program for what would now be petty theft charges when an individual steals less than $900 worth of property. Why not implement the Neighborhood Court as part of the process to deal with those individuals?

18 thoughts on “Analysis: Is Prop 47 to Blame For Increase in Crime in California?”