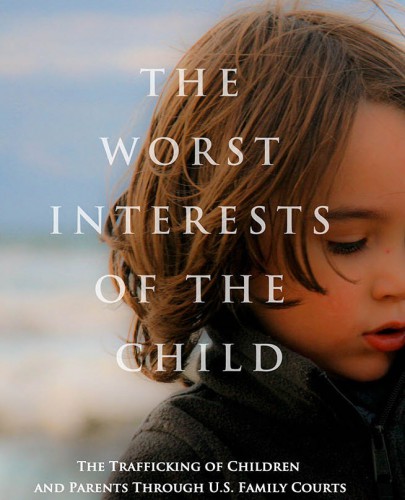 I’ve been writing about the abuses going on in adult guardianship proceedings now for over ten years. Details regarding the physical and financial abuse of seniors and disabled are nothing new to me. One might have thought I would have been prepared for The Worst Interests of the Child, by Keith Harmon Snow. But I was not.

“This book is about the organized crime of Family Courts in the United States,” writes Snow in the preface to this book. Keith Harmon Snow is an award- winning journalist, photographer and writer who has worked in 45 countries. He worked as a journalist accredited with the United Nations Observer Mission in Congo (MONUC), as a human rights investigator for Genocide Watch, and as genocide investigator for the United Nations in Ethiopia.

In this compelling and disturbing book, Snow has launched an expose of Family Court in Connecticut, although his research and findings are echoed in courts across America. The victims in his study, like the victims of guardianship court, are vulnerable and cannot protect themselves. However, unlike the elderly victims of guardianship court, these young victims are just beginning their lives. The scars from the abuses that Family Court refuses to address, refuses to protect them from, will be carried throughout the rest of their lives. Through no fault of their own, through the unfortunate happenstance of being born the child of a predator, these children have received, as Snow so aptly states, a life sentence.

Snow writes: “The problem with Family Courts is that financial interests outweigh the judicial issues, and the entire legal system has been geared to support the financial plunder of clients. This is most evident by examination of the behavior of lawyers who take cases for both perpetrators of abuse and protective parents (not only, but usually, the mothers).”

His investigation reveals a seamy web of professionals—lawyers, judges, guardian ad litems, psychiatrists and supervised visitation companies—whose back room connections well serve their own financial interests at the expense of an abused child’s welfare. As Snow repeatedly demonstrates in multiple case histories, the protective parent’s resources are drained by these professionals, as she seeks to do whatever is financially necessary to protect her child.

This includes, but is not limited to, hiring expensive (and often complicit) attorneys, submitting to psychological examination and testing by evaluators cherry-picked by the court, paying for supervised visitation at exorbitant rates (often over $175 an hour), paying court ordered child support payments when the child has been remanded into the custody of the abusive parent, paying the abusive parent’s legal fees and more.

The Worst Interests of the Child focuses on the case involving the minor child Max Liberti; however, the book is peppered with examples from a multitude of similar cases, in Connecticut and elsewhere. One is introduced to a series of players—judges, lawyers, guardian ad litems and psychiatrists—whose actions in the Liberti case, as well as in other cases, reveal a playbook by which an ostensibly endangered child is put at further risk by those pledged to protect him.

The purpose, states Snow, is self enrichment for the players. “Behind the judicial abuse is a… bureaucracy of highly paid “professionals” whose profits accrue in direct proportion to the level and duration of conflict they can create and maintain between the parents,” he writes.

And the money to be made is significant. Not only is the protective parent’s assets drained through attenuated court proceedings, through lawyers, evaluators and visitation agencies. The mammoth federal agency, Health and Human Services, maintains a $51 billion a year budget for children and families. This money is earmarked for such programs as “foster care and permanency,” “social services,” “child support enforcement and family support,” among others.

All in all, child abuse is a lucrative industry.

Interestingly, the same names pop up in a number of the cases discussed in this book. We will meet Dr. Kenneth Robson, pedophile expert, who worked at a large and apparently rather posh facility where the Catholic church sent its errant priests for unsuccessful “rehabilitation.” Robson, we will see, is an evaluator of choice in cases where there are allegations of sexual abuse, and errs repeatedly in favor of alleged abusers, turning the tables on the protective parent and facilitating the abuser to gain custody of a minor child.

We will meet Nick Sarno, aka Nicolas J. Siconolfi, aka Nicholas Sicinolfi, who owns a visitation supervision company called N.J. Sarno and Company, which holds supervised visitations in the parking lot of the police department, and who packs a weapon which may not be entirely legal. His visitation supervisors do not have social work degrees, in fact, may not have any training at all in domestic violence or sexual abuse. Snow reports that the Sarno company, which is not listed as a visitation company in a national directory for Supervised Visitation Providers for Connecticut, is charging some parents upwards of $10,000 a month for supervision services.

We will meet Judge Lynda Munro, Chief Administrative Judge of Family Matters for the state of Connecticut. Munro, whose name appears as judicial officer in a number of the cases cited in this book, regularly seals records which would raise questions as to her proper administration of justice. In addition, Munro, as a member of the Connecticut Practice Book Rules Committee, “has been a key figure in a clear conspiracy to rewrite and reformulate changes that enable Family Courts, judges, lawyers and custody evaluators to make their own rules and violate laws with impunity,” writes Snow.

The Practice Book governs jurisprudence in Connecticut and Munro meets in secret with her committee members. Snow writes that “…the public record that has being (sic) presented afterwards has been adjusted to obscure the Actual discussions and decisions. Any changes to Practice Book Rules should be subject to public hearings. ” Snow brings to the fore questions as to the legality of this Committee, stating “the state’s Executive Branch—rulemaking and lawmaking—should be separated from the Judicial Branch.”

We will read, in some detail, Judge Munro’s peculiar brand of in -court shenanigans when she adjudicated the Liberti case and “delivered Max Liberti to his father on a silver platter.”

We will read, with dismay and growing comprehension, how newspapers like the Connecticut Mirror cover for these judges. Snow traces the connections between the newspaper and the court system and reveals the names of Family Court lawyers and spouses of Family Court judges and other connected parties who are sitting on the newspaper’s board of directors. “It is clear,” writes Snow, “why any coverage of family court issues by the Connecticut Mirror would seek not to offend the “good name” and vested interests (of these individuals).”

We are also introduced to brave and relentless parents who have lost everything in their battle to protect their children. Bankrupted, and having lost their children to the abusers, they still do not give up hope. Most of these are ordinary, middle class women who had the misfortune of marrying men who turned out to be pedophiles. Their spouses’ predilections end up costing these women everything, against all conceptions of justice.

Snow, however, does not plumb the depths of the federal involvement in the trafficking of children through Family Courts. He appears to be aware that the problem may extend up to the national level when he writes: “We do not want and we do not need any more secretive investigations by the Federal Bureau of Investigations, or the Attorney General of the United States, because it seems they cannot be trusted….”

The Worst Interests of the Child provides long overdue revelations as to the malfunction of the justice system in Family Court. Snow has produced a horrific and exquisitely well-documented account of justice, American style. It is high time that the Family Court system received such diligent and honest scrutiny. One can only hope that the abuses going on in guardianship court and the malfunction of criminal proceedings ravaging whistleblowers and human rights defenders will also someday receive similar attention.

3 thoughts on “Book Review: The Worst Interests of the Child”