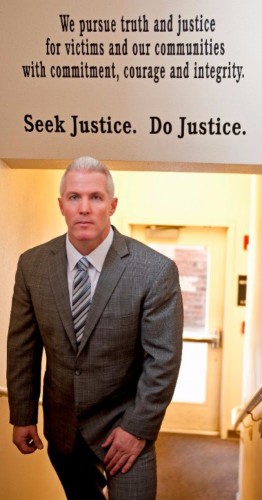 For the second year in a row, Yolo County DA Jeff Reisig lamented the effects of Proposition 47. He cited current statistics that show that, while felony filings are down 30 percent, misdemeanor filings are up 60 percent, for an overall increase of 30 percent of criminal cases.

He noted reports from the Public Policy Institute of California (PPIC) which show that California is leading the way in violent crime increases, and violent crime is rising faster in Sacramento than in other large cities. This, he argues, bleeds into what is happening in Yolo County.

“All of the major cities in Yolo County, Davis, Woodland and West Sacramento, have seen increases in violent crime and property crime in 2015,” he said. “We are surrounded by the very imminent threat, and I don’t think it’s going away.”

“Our efforts so far have been pretty dismal,” he said. “About an 8 percent success rate on the programs that we have been providing them.”

Chief Probation Officer Brent Cardall this time backed up the DA, noting how few offenders have actually graduated from treatment and the high rate of Prop. 47 cases that are in violation.

While last year DA Jeff Reisig got into it with Judge David Rosenberg in casting blame in this direction, this time he didn’t single out any particular entity, noting, “Not through a lack of efforts on anyone’s part, but just the nature of the offender if there’s not more stick, there’s no incentive to create drug programing.”

However, Mr. Cardall, when pressed, stated that “the judges could order longer sentences.” While Prop. 47 allows for offenders to receive up to a year in county jail for crimes that used to be felonies, that is not happening in Yolo County.

“They’re not looking at a year in jail,” Mr. Cardall said. “They’re looking at 30 to 60 days. … I have not seen lengthy sentences with that population.” He noted, “The judges could order longer sentences.”

The problem here according to Mr. Cardall is that “the clients would rather (face) 30 to 60 days in jail and be done with their sentence and be released. It’s difficult to have them under supervision and go through treatment if there’s not a stick.”

The other problem is funding. Mr. Reisig told the board, it is not coming “to us anyway. It’s not coming to the CCP [Community Corrections Partnership] for the type of treatment… I believe a lot of it is directed toward mental health type.”

But this discussion misses a key point. California voters passed this measure back in 2014 because the voters have grown weary of the tough-on-crime approaches that imposed harsh sentences and prison time even for relatively low-level offenses.

Zachary Norris, executive director of the Ella Baker Center for Human Rights in Oakland, wrote last year, “Requiring that certain low-level offenses be charged as misdemeanors begins to tear apart that web by removing huge barriers that prevent former inmates from obtaining available jobs and housing. Under Proposition 47, individuals with felony convictions who were previously barred from public housing, or who were discriminated against in their job search, now have a genuine opportunity to rebuild their lives and rejoin their communities. That will make us all safer.”

But the expectation was that these sorts of crimes would result in treatment options, with the money freed up from savings on incarceration. That part hasn’t happened. And while opponents of Prop. 47 like Jeff Reisig lament the rise in crime, they fail to take responsibility for their part in it.

Sources tell the Vanguard that there was a treatment plan that would have been implemented in Yolo County, that all the other stakeholders had agreed to, but the district attorney himself blocked it.

Yolo County has some options that the DA has reportedly refused to utilize. One possibility is to divert Prop. 47 defendants into treatment at the Yolo County Day Reporting Center. The DRC was opened in February 2013 and it provides vocational training, life skills which are designed to teach offenders the skills they need to find a job.

One of the programs they have includes drug and alcohol treatments. That is an existing program that has received high marks.

The other thing that the DRC can do is job training, providing vocational and life skills to help them get a job.

From our standpoint, Mr. Reisig has a potential solution right in front of his nose, and refuses to use it. Earlier in his presentation he bragged about the success of the Neighborhood Court diversion program and how jurisdictions across the state and even the nation were looking to adopt it.

While the Neighborhood Court program has a lot of potential, advocates of restorative justice approaches argue that we should go further – much further. In November 2013, the Vanguard featured Fresno County Judge David Gottlieb as a speaker and he had implemented a restorative justice program in Fresno involving youth offenders.

Right now the Yolo County program focuses mainly on victimless crimes, but Fresno has for 30 years been far ahead, bringing victims and offenders together.

Many have falsely argued that programs like restorative justice approaches are “soft” responses to crime. However, they are missing a crucial element. In a punishment-based system, the individual is incarcerated. They often maintain their innocence and rarely have to take responsibility for their crimes.

The district attorney, at the very least, has the opportunity to introduce a restorative justice program for what would now be petty theft charges when an individual steals less than $900 worth of property. Why not implement the Neighborhood Court as part of the process to deal with those individuals?